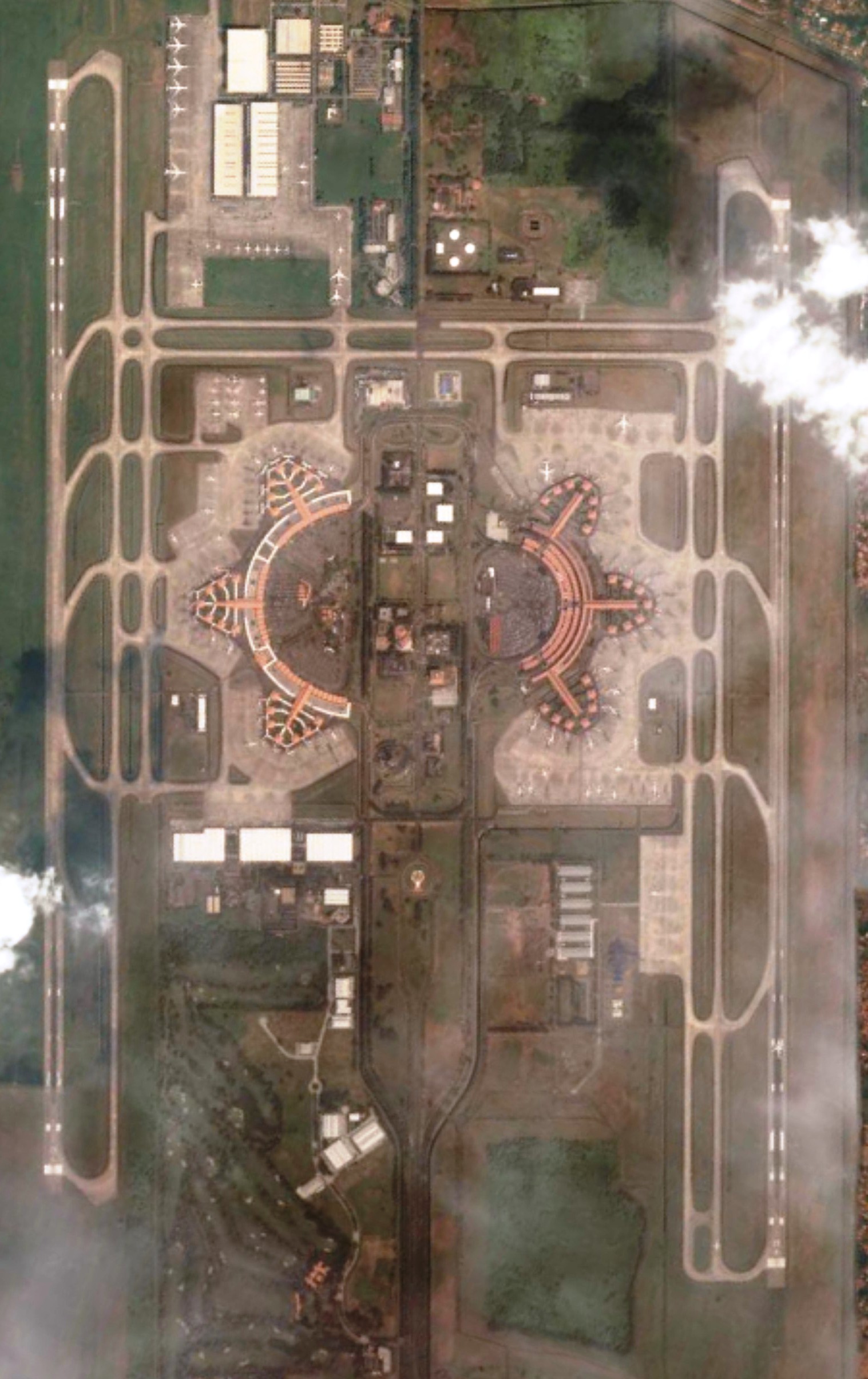 Soekarno-Hatta International Airport ( _id. Bandar Udara Internasional Soekarno-Hatta) Airport codes|CGK|WIII is the main serving the greater area on the island of , . The airport is named after the first President of Indonesia, , and the first vice-president, . The airport is often called Cengkareng by Indonesians. The airport's IATA code, CGK, originates from the name of the locality, a district situated to the northwest of the city.

Located about 20 km west of Jakarta, in , , Soekarno-Hatta airport began to operate in 1985, replacing the former (domestic flights) in , and
in . Kemayoran Airport had since closed. Halim Perdanakusuma is still operating, serving mostly charters and military flights. Terminal 2 was opened in 1992.

The land area of the airport is 18 km². It has two independent parallel runways separated 2,400 m connected by two cross taxiways. There are two main terminal buildings: Terminal 1 is for all domestic airlines except for flights operated by and , and Terminal 2 serves all international flights as well as all domestic flights by Garuda and Merpati Nusantara Airlines.

The airport was designed by , a French architect who also designed in Paris. One of the major characteristics of Soekarno-Hatta airport is the incorporation of the local vernacular architecture into the design, and the presence of tropical gardens in between the waiting lounges. However, due to poor maintenance, its not too strategic location, and lack of budget, the airport is inferior to many international airports in the region. However, Soekarno-Hatta International Airport was noted for its beautiful landscaping: the airport was awarded the 1995 . [ [http://www.akdn.org/agency/akaa/sixthcycle/indonesia.html Aga Khan Award for Architecture - The Sixth Award Cycle, 1993-1995 ] ]

Angkasa Pura II is currently planning to build a new terminal with modern design features. Terminal 3 is being built for low-cost airlines, and already serves flights and transnational migrant laborers. There is a masterplan to make 5 passenger terminals + 1 terminal and 4 . In 2009 the airport will be connected to (future Jakarta central station) by a railway. To finance the expansion, the airport is collecting an of IDR 100,000 ($9 USD/8 Euro) for each international passenger and IDR 30,000 for each domestic passenger.

Soekarno-Hatta International Airport was the 35th busiest airport in 2004-2006, according to Airliners World magazine.

Between 1928&ndash;1974, the intended for domestic flights was considered too close to an Indonesian military airfield, . The civil airspace in the area became narrow, while air traffic increased rapidly, which risked international air traffic. In 1969, a Senior Communication Officers meeting in expressed this concern.

In the early 1970s, with the help of , eight potential locations were analyzed for a new international airport, namely Kemayoran, Malaka, Babakan, Jonggol, Halim, Curug, South Tangerang and North Tangerang. Finally, the North Tangerang airspace was chosen and it was also noted that Jonggol could be used as an alternative airfield. Meanwhile the Indonesian government started to upgrade the Halim Perdanakusumah airfield to be used for domestic flights.

Between 1974&ndash;1975, a Canadian consultant consortium consisting of Aviation Planning Services Ltd., ACRESS International Ltd., and Searle Wilbee Rowland (SWR), won a bid for the new airport feasibility project. The feasibility study started on with a total cost of 1 million . The one-year project proceed with an Indonesian partner represented by PT Konavi. By the end of March 1975, the study revealed a plan to build three inline runways, a perforated road, three international terminal buildings, three domestic buildings and one building for flights. Three stores for the domestic terminals would be built between 1975&ndash;1981 with a cost of US$ 465 million and one domestic terminal including an apron from 1982&ndash;1985 with a cost of US$ 126 million. A new terminal project, named the Jakarta International Airport Cengkareng (code: JIA-C), began. [http://www.angkasa-online.com/12/04/lain/lain12.htm Riwayat Penerbangan Cengkareng]

1975 – 1977To dispense the land and also set up the province border was time needed. Schipol, Amsterdam was asked for opinion which according to them is rather expensive and over design. The cost raised up high because of using decentralization system. The Centralization system was a suitable one.

The Team decided on a decentralization system like the one used at Orly West Airfield, Lyon Satolas,, Langen-Hagen-Hanover and Kansas City Airport module system was adopted because it is simple and effective.


The building project tender was won by the French Aeroport de Paris.


The Final contract design was agreed on by the Indonesian Government and Aeroport de Paris with a fixed cost of about 22,323,203 French francs and Rp. 177,156,000 equivalent to 2,100,000 francs. The work was scheduled to take 18 months. The government appointed PT. Konavi as the local partner.

The result was:
• 2 inline runways including taxiways
• Perforate roads: 1 at the east, another at the west for airport services. The west was closed to public use.
• 3 terminals which can accommodate 3 million passengers per year.
• 1 module for international flights and 2 for domestic.
• An Airport inside a garden was selected as an image.


The airport structure was complete.


The second terminal was started and launched on .

Terminal 1 is the first terminal of Soekarno-Hatta International Airport. It was finished on 1985. It is located on the opposite of Terminal 2 which is on the south site. It operates domestic flights except and as they operate their domestic flights in Terminal 2. This terminal has 3 sub-terminal. Each sub-terminal has 25 check-in counters, 5 baggage carousels and 7 gates. It has the capacity of handling 9 million passengers per annum.The gates in Terminal 1 has alphabet prefix of "A", "B" and "C". The gates are A1-A7, B1-B7 and C1-C7.

Terminal 2 is the second terminal of Soekarno-Hatta International Airport. It was finished on 1992. It is located on the opposite of Terminal 1 which is on the north site. It operates international flights as well as domestic flights of and only. Terminal 2 has 3 sub-terminals. Each sub-terminal has 25 check-in counters, 5 baggage carousels and 7 gates. It has the capacity of handling 9 million passengers per annum.The gates in Terminal 2 has alphabet prefix of "D", "E" and "F". The gates are D1-D7, E1-E7 and F1-F7.

Terminal 3 plans to operate low-cost carriers. The terminal would be different in design from Terminal 1 and 2. It would also be able to operate . It is located opposite of Terminal 4 and on the east side of Terminal 2 which still on the north site. Phase I will be finished in early December 2008. [Angkasa Pura 2 http://www.angkasapura2.co.id/]

Terminal 3 is going to have 5 piers, and each pier has a capacity of 4 million. [ [http://www.angkasapura2.co.id/ Angkasa Pura II] ] After Terminal 3 is built, the capacity of Soekarno-Hatta International Airport will be 38 million passengers from currently 18 million.

Terminal 3 Phase I (Pier 1) is currently under construction. When it is completed, Terminal 3 would be dedicated for low cost carriers and . Terminal 3 Phase I is under construction and will be finished in early December 2008. [http://www.angkasapura2.co.id/ Angkasa Pura 2] Rendering can be found here [http://www.angkasapura2.co.id/images/t3.jpg] . Currently Terminal 3 serves hajj pilgrimage flights and transnational migrant laborers. [Silvey, R. "Unequal Borders: Indonesian Transnational Migrants at Immigration Control," "Geopolitics," vol. 12, no. 2, pp. 265-279, 2007.]

The following airlines operate from (Jakarta) Soekarno-Hatta International Airport (as of July 2008):

Soekarno-Hatta International provides many facilities for the passengers' convenience and during transit.

Before first security check (before check in counters) the airport has many foods and beverages counters spread along the area, including , , and many more.

Disabled passengers traveling though CGK have many facilities ready for them. Both terminals have toilets specially designed for the disabled and elevators. Airlines if told in advance can provide wheelchairs for disabled passengers.

The airport was designed to resemble the traditional Javanese house called Rumah Joglo and it was combined with a beautifully maintained garden located in every boarding area inside the airport.

Pura Indah Lounge, available for first and business class passengers of , , , and .

The new lounge is available for GA's business class passengers only, as well as GECC cardholder. This lounge is the most comprehensive lounge facility at the airport, including meeting room, shower facilities, quiet room and many more.

Beside these primary lounges, there are also other lounges that can be used as complimentary from many banks for their cardholders. Cafes can be found as well, including .

Depending on traffic, Soekarno-Hatta is a 30 minutes drive from Jakarta's city center via Sedyatmo Toll Road. CGK provides parking lots however passengers should be noted that these parking lots are often over capacity.

Taxis are provided and is about 30 to 45 minutes into center city Jakarta. Car rental is provided by Avis, Bluebird, Goldenbird and Europcar. [ Some passenger reviews advise against car rentals or taxis from CGK. [http://www.airlinequality.com/Airports/Airport_forum/cgk.htm Passenger Opinions about CGK] .]

It is strongly recommended that you allow at least one hour to get to the airport from central Jakarta. If you are leaving the city after 4pm on any day, but especially a Friday, allow 90 minutes. Arriving into Jakarta from other cities you should plan to arrive after 9am so that you miss the heavy traffic. Morning commute from airport to the city can be as much as 2 to 3 hours depending on rain, inundation, incidents, roadworks or the toll operators randomly changing the payment methods or on/off ramp configurations. Furthermore, there is only one toll road servicing the airport, and as such you could miss your flight or be unavoidably delayed if not taking all these things into consideration.

The most recent problem is flooding. In recent years two cases of flooding stranded thousands of passengers at the airport. The only road to the airport got flooded so no vehicles can get through the tollway, with exceptions such as trucks and buses. Right now, there is a solution to this problem that is being researched by . The solution is to build a bridge over the last flood's water level so that the tollway will not be flooded again.

It seems that the 'bridge' project is now a dyke project. In June 2008 Jakarta was again threatened by seasonal tidal floods. Weather forecasters were predicting the worst tidal floods in 180 years. However only minor flooding was seen and the partly completed barriers seems to have some impact on keeping the road open.

At this stage (June 2008) the road seems to be some 2 metres below the top of the barrier, not very comforting at all. One wonders if the planners have decided that the 'one in a hundred years' floods, of which Jakarta has had at least 3 in the past 10 years, will not come again.

Areas further inland from the airport reported flooding at least 1 metre higher than ever before and many low laying homes were flooded almost to the ceiling. Most of this internal flooding (only 5 km from the airport) seems to be the result of unchecked residential development where there has been scant regard for the impact on existing areas and certainly without any improvements to the infrastructure.