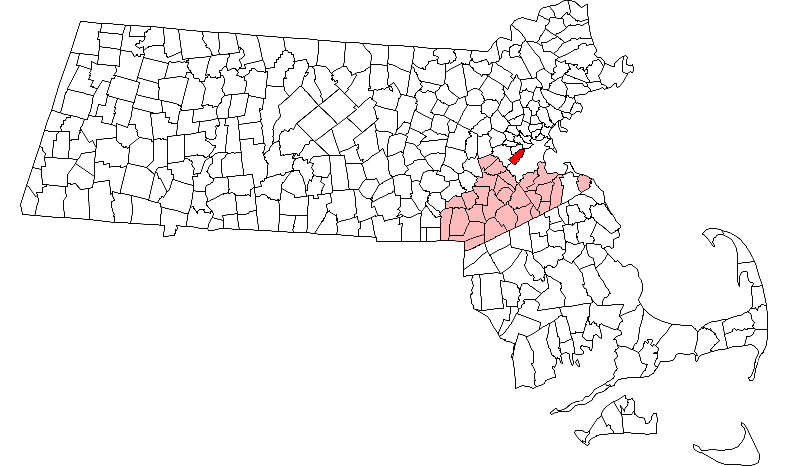 Brookline is a town in Norfolk County, , , which borders on the cities of Boston and Newton. As of the 2000 census, the population of the town was 57,107.

Brookline was known as the hamlet of Muddy River (a river which today makes up part of the Brookline-Boston border) and was considered a part of Boston until the Town of Brookline was independently incorporated in 1705. Its name is derived from the brooks that created the town lines with the former towns of Brighton and Roxbury, which are both now parts of Boston.Fact|date=April 2007

Brookline actually separates the bulk of the city of Boston (except for a narrow neck or corridor near the ) from its westernmost neighborhoods of /Brighton, which had been the separate town of Brighton until annexed by Boston in 1873.

Once part of territory, Brookline was first settled by European colonists in the early 1600s. The area was an outlying part of the colonial settlement of and known as the hamlet of Muddy River. In 1705, it was incorporated as the independent town of Brookline. The northern and southern borders of the town were marked by two small rivers or brooks, hence the name. The northern border with Brighton (which was itself part of Cambridge until 1807) was Smelt Brook. (That name appears on maps starting at least as early as 1852, but sometime between 1888 and 1925 the brook was covered over. [ [http://web.mit.edu/rzeledon/www/city/NaturalProcesses.html Packard's Corner: Once and Future City] ] ) The southern border, with Boston, was the Muddy River.

The city of Brighton was merged with Boston in 1874, and the Boston-Brookline border was redrawn to connect the new Back Bay neighborhood with Allston-Brighton. This created a narrow strip of land along the belonging to Boston, cutting Brookline off from the shoreline. It also put certain lands north of the Muddy River on the Boston side, including what are now and . The current northern border follows Commonwealth Avenue, and on the northeast, St. Mary's Street. When the of parks and parkways was designed for Boston by in the 1890s, the Muddy River was integrated into and , creating parkland accessible by both Boston and Brookline residents.

Throughout its history, Brookline resisted being absorbed by Boston, in particular as the was decided in favor of independence. The neighboring towns of West Roxbury and Hyde Park connected Brookline to the rest of Norfolk County until they were annexed by Boston in 1874 and 1912, respectively, putting them in Suffolk County. Brookline is now separated from the remainder of Norfolk County.

Brookline has long been regarded as a pleasant and verdant environment. In 1841 edition of the "Theory and Practice of Landscape Gardening", Andrew Jackson Downing described the area this way:

The town has since seen considerable development, though still does maintain a considerable amount of greenspace in certain neighborhoods.

Two branches of upper , established in the 1670s, passed through Brookline. Brookline Village was the original center of retail activity. [ [http://www.town.brookline.ma.us/Planning/brooklinevillage.html Brookline Village ] ] In 1810, the Boston and Worcester Turpike, now , was laid out, starting on Huntington Avenue in Boston and passing through the village center on its way west.

Steam railroads came to Brookline in the middle of the 19th century. The was constructed in the early 1830s, and passed through Brookline near the Charles River. The rail line is still in active use, now paralleled by the . The Highland Branch of the was built from Kenmore Square to Brookline Village in 1847, and was extended into Newton in 1852. In the late 1950s, this would become the .

The portion of Beacon Street west of Kenmore Square was laid out in 1850. tracks were laid above ground on Beacon Street in 1888, from to Massachusetts Avenue in Boston, via Kenmore Square.Fact|date=July 2007 In 1889, they were electrified and extended over the Brighton border at . They would eventually become the .

Thanks to the system, this upgrade from to electric trolleys occurred on many major streets all over the region, and made transportation into downtown Boston faster and cheaper. Much of Brookline was developed into a , with large brick apartment buildings sprouting up along the new streetcar lines.

There were 25,594 households out of which 21.9% had children under the age of 18 living with them, 38.4% were married couples living together, 7.1% have a female householder, and 52.2% were non-families as defined by the Census bureau. 36.7% of all households were made up of individuals and 10.1% had someone living alone who was 65 years of age or older. The average household size was 2.18 and the average family size was 2.86.

Brookline is governed by a representative (elected) town meeting, which is the legislative body of the town, and a five-person which serves as the executive branch of the town. For more details about the roles and procedures within the government of Brookline, please see [http://www.townofbrooklinemass.com/TownInformation/TownGov.html the town government's own description] .

The town is served by the [http://www.brookline.k12.ma.us/ Public Schools of Brookline] . The student body at includes students from more than 50 different countries. Many students attend Brookline High from surrounding, neighborhoods in Boston, such as Mission Hill and Mattapan, via the Metropolitan Council for Educational Opportunity () system.

Several private primary and secondary schools, including the , , [http://www.britishschool.org/site/epage/32178_565.htm British School of Boston] , , , and are located in the town.

Several institutes of higher education are located in Brookline, including:
*
*
*
*
*parts of
*Boston Graduate School of Psychoanalysis
* [http://www.artinstitutes.edu/boston/ The New England Institute of Art]

As close to Boston as Brookline is, it has managed to maintain its own identity. Brookline features a mixture of urban and suburban living, upscale shops and recreational parks, apartment buildings and large estates. Along with offering both a city atmosphere and a feeling of being in the country, there is a wide mix of people in Brookline. It is the home of many academic and scientific professionals who work at the nearby medical centers in Boston. Brookline has staunchly refused to be absorbed by Boston, which surrounds it like a horseshoe. Brookline has kept its form of government since its 1705 incorporation. It also has an overnight on-street ban which is unusual for such a dense area. Among its many unusual resources, Brookline has its own working farm (with farm stand), the oldest country club in the nation, a town golf course, a park on a hillside overlooking Boston with an open-air skating rink and transportation museum, as well as numerous neighborhood parks and playgrounds scattered throughout the town.

Its major retail centers, including , Brookline Village, Washington Square, and the Chestnut Hill Shopping Center, are pedestrian-oriented shopping areas with a variety of stores, restaurants and malls.

Although predominantly residential, Brookline is somewhat open to new commercial development, and has amended its zoning to encourage limited growth along its major thoroughfares.

Brookline is known in the Boston area for its large population of Russian immigrants and numerous synagogues. culture is very strong in Brookline; the Jewish population was estimated in 2002 at 20,300, [ [http://www.jewishdatabank.org/ajyb/ajy-2003.pdf American Jewish Yearbook, 2003] ] so Jews compose over 35% of the town's population. Jewish culture is especially notable along the section of Harvard Street that starts at Washington St (Brookline Village) runs through Beacon Street (Coolidge Corner) and ends at Commonwealth Avenue, continuing into . This neighborhood is home to at least three area synagogues including the first Jewish congregation in Massachusetts (Ohabei Shalom, founded in Boston in 1842 and located in Brookline since the 1920s) and a number of Jewish-themed restaurants and stores. Brookline is also known for its excellent schools, which are supported in large part by property taxes &mdash; the town has one of the highest property tax burdens in the country.

While residents of Brookline tend toward liberal values, economic and cultural factors keep this section of the metropolitan area less diverse than its neighbor across the , Cambridge. Brookline's liberalism and diversity are relatively new developments in the town's history. In the 19th century, Brookline, which had been called "the richest town in America", was a sanctuary for the wealthy, where Boston's elites built their summer homes.

*There were two stops on the in Brookline: 9 Toxteth Street and 182 Walnut Street. [cite web|url=http://www.garrenshay.com/ur/Toxteth%20St.htm|title= The William Bowditch House|accessdate=2007-09-12] [cite web|url=http://www.garrenshay.com/ur/Walnut%20St.htm|title= The Samuel Philbrick House|accessdate=2007-09-12]

*, an exclusive sporting club in the town, was the first private club in the United States formed exclusively for outdoor activities. It is most famous as a club; it was one of the five clubs that formed what is now the and has hosted the U.S. Open three times and the Ryder Cup Matches once.

*"Fairsted", the 100-year-old business headquarters and design office for renowned landscape architect and the firm, has been carefully preserved as the , on seven acres (28,000 m²) of landscaped grounds at 99 Warren Street. The town is home to part of Olmstead's of park systems.

* is in Brookline on the 64-acre estate once owned by and . The park contains the , the oldest automobile collection in the country, as well as , a from colonial times.

*The birthplace of John F. Kennedy stands in Brookline and is listed in the . It is maintained by the and is open to the public from May through September.

*St. Aidan's Church was where John F. Kennedy was christened and where the Kennedy family and other prominent Irish-Americans were parishioners. The church was designed by architect Charles Maginnis, who was awarded the 's Gold Medal. Though it is on the National Register of Historic Places, St. Aidan's Church has been closed and may be converted into housing.

*, which is located at the crossing of and Harvard Street, is one of Brookline's two primary retail districts (the other being Brookline Village). It includes a number of historically significant sites, including the Building (now occupied by a ), and the Coolidge Corner Theatre.

*Beacon Street in Brookline is the setting of the "", a series of for pre-teen girls.
*'s song "Brookline" seems to revolve around the area and its culture.