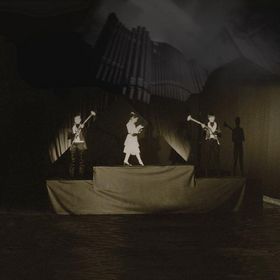 "Intervention" is a song by Canadian band . It is the second single released from the band's second full-length album, "Neon Bible". The single was released on on , and was released as a 7" vinyl in the UK under . In the US, it was released on under . The B-side of the vinyl includes a cover of another song from Neon Bible, "Ocean of Noise", performed by . It became a single of the week on Mark Radcliffe and Stuart Maconie's 8pm show on 2.Fact|date=June 2007

"Intervention" currently holds the number eighteen spot on 's [http://rateyourmusic.com/charts/top/single/2000s Top Singles of the 2000s] . It was also voted song of the year on Tony Fenton's radio show on Today FM in Ireland. It also ranked as the #2 single of 2007 on 's year-end "R3-30" chart, behind only ' "Civil Twilight".

"Intervention" was set to be released on as a charity download for the Haitian charity organization . When the band was uploading the song however, they accidentally uploaded "Black Wave/Bad Vibrations", another song from their album "Neon Bible". "Black Wave/Bad Vibrations" was removed shortly thereafter and "Intervention" was properly uploaded two days later.

#"Intervention"
#"Ocean of Noise"
#*Performed by