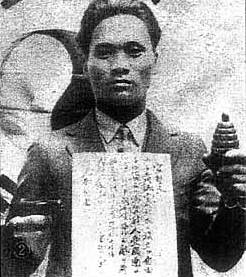 On , , he carried out a bombing attack using a bomb disguised as a water bottle at a Japanese army celebration of Emperor 's birthday in . The bombing killed , a general of the , and nihongo|Kawabata Sadaji|河端貞次, a Government Chancellor of Japanese residents in Shanghai. It also seriously injured , Division 9 commander of the Japanese Imperial Army, nihongo|Kuramatsu Murai|村井倉松, Japanese Consul-General in Shanghai, and , Japanese Envoy in Shanghai.

Yoon was arrested at the scene and convicted by the Japanese military court in on . He was transferred to prison on , and executed in Kanazawa on . He was buried in Nodayama graveyard.

In May 1946, his remains were excavated by Korean residents in Japan, transferred to and given funeral rites. He was then reburied in the . In 1962, the government of South Korea's Second Republic praised his bombing attack, and posthumously bestowed the Republic of Korea Cordon (Grand Cordon) of the Order of Liberation Merit on him.