As heir apparent to the Spanish throne he bears the official titles of Prince of Asturias, Prince of Girona, Prince of Viana, Duke of Montblanc, Count of Cervera and Lord of Balaguer.

Felipe was born in Madrid. His birth, after that of his two sisters, the infantas Elena and Cristina, ensured a male successor to the Spanish throne. His full name is Felipe Juan Pablo Alfonso de Todos los Santos de Borbón y de Grecia. The symbolic names given at his christening, by the Archbishop of Madrid Casimiro Morcillo González included the names of the first Bourbon to reign in Spain; his grandfathers (Infante Juan, Count of Barcelona and Paul of Greece); his great-grandfather King Alfonso XIII of Spain; and All Saints (Todos los Santos or et omnes sancti) as is customary among the Bourbons. At the time of his birth he was titled as Infante of Spain, as his father was not yet King and Felipe was not yet heir apparent. His godparents were his grandfather Infante Juan, Count of Barcelona and his great-grandmother Queen Victoria Eugenia.

On 30 January 1986, at the age of 18, Felipe swore allegiance to the Constitution and to the King in the Spanish Parliament, fully accepting his institutional role as successor to the Crown.

Activities in Spain and abroad 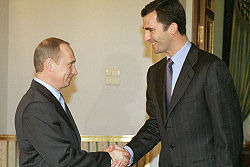 With then-President of Russia Vladimir Putin on 7 February 2002.

Felipe started school at Santa Maria de los Rosales, a modern day school where he could fit in without special treatment. Felipe attended high school at Lakefield College School in Ontario, Canada, and studied in the Autonomous University of Madrid, where he earned a degree in Law. He also completed several courses on economics. He completed his academic studies by obtaining a Master of Science in Foreign Service degree from the Edmund A. Walsh School of Foreign Service at Georgetown University, where he was the roommate of his cousin, Crown Prince Pavlos of Greece. Felipe has fulfilled his institutional commitments in his capacity as Heir to the Crown, chaired many official events in Spain, and participated in key events in different sectors and aspects of Spanish public life. Since October 1995, Felipe has made a series of official visits to the Spanish Autonomous Communities with a view to gaining in-depth knowledge of Spain and making contact with other Spaniards. Felipe holds regular meetings with constitutional bodies and the main state institutions in order to keep in touch with their activities. He also attends meetings of the various bodies of the Central Administration and of the Autonomous Communities as required by his national and international institutional activities. Felipe grants public and private audiences to a large number of people with a view to receiving up-to-date information on national and international affairs. In particular, he holds meetings with people close to his own generation with outstanding careers in political, economic, cultural and media circles. When King Juan Carlos is unable to attend, Felipe presides over the annual presentation of dispatches to Officers and Non-Commissioned Officers of the Armed Forces and participates in military exercises held by the three services.

He has made many official visits to European countries and to Latin America, as well as to countries in the Arab world, the Far East, and Australia. He shows special interest in all matters related to the European Union, the Middle East, North Africa, and Latin America. Since January 1996, Felipe has represented the Spanish State at the swearing-in ceremonies for several Latin American Presidents. Felipe has also played a very active role in the promotion of Spain's economic and commercial interests and of Spanish language and culture in foreign countries. He frequently presides at economic and trade fairs held by Spain abroad (Expotecnia, Expoconsumo, and Expohabitat), and is especially interested in promoting the creation of Centres and University Chairs to disseminate the history and current situation of Spain in major foreign universities. Felipe is godfather to at least four children: Luis Felipe Gómez-Acebo y Ponte, the son of his cousin, Beltrán (son of Infanta Pilar); Princess Ingrid Alexandra of Norway, daughter of Haakon, Crown Prince of Norway; Prince Vincent of Denmark, second son of Frederik, Crown Prince of Denmark, and Princess Sofia of Bulgaria, daughter of Prince Konstantin of Bulgaria. In turn, Konstantin is godfather to Felipe's daughter, Sofía.

Participation in the Olympics 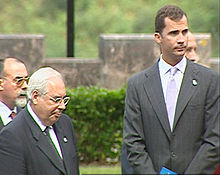 Felipe was a member of the Olympic sailing team at the Barcelona Games in 1992, which recalled his mother's and uncle's position on the Greek sailing team in 1960. He also took part in the opening ceremony as the Spanish team's flag bearer. He finished in sixth position in the Soling class and obtained an Olympic Diploma.

The bachelorhood of Felipe was an issue in the Spanish press for several years. His name was linked with several eligible women, but only two with any conviction: Spanish noblewoman Isabel Sartorius, who was not viewed favorably by the Royal Family due to her being three years older than he was and having divorced parents;[citation needed] and Norwegian model Eva Sannum, who had modeled underwear, something favored by neither the Spanish people nor the Royal Family.[citation needed] When Felipe finally began a serious relationship, nothing was suspected before the official announcement. On 1 November 2003 the Prince's engagement to Letizia Ortiz Rocasolano, an award-winning television journalist formerly with CNN, was proclaimed. Despite the fact she had been civilly married and then divorced, the public generally approved of Letizia since she represented the modern woman—independent, cultured, and accomplished in her profession. The couple married on the morning of 22 May 2004 in the Almudena Cathedral in Madrid, with members of several European royal families attending. Ortiz had previously been married to Alonso Guerrero, a teacher and author; they were divorced in 1999. The wedding was watched by more than 25 million television viewers in Spain alone, and was broadcast throughout the world. Letizia Ortiz then gained the title HRH The Princess of Asturias, but is often referred to as Princess Letizia. On 8 May 2005, the Spanish Royal House announced that the couple were expecting their first child in November.

After the 11 March 2004, Madrid bombings, Felipe, along with his sisters Elena and Cristina, became the first members of the Spanish royal family ever to take part in a public protest.

In addition to his official activities, Felipe is Honorary President of several associations and foundations , such as the Imperial Munitions Board, which finances specific economic and social development activities in Ibero-America and other countries, and the Spanish branch of the Association of European Journalists, which is composed of outstanding communications professionals. Most noteworthy is the Príncipe de Asturias Foundation, where he presides annually the Awards ceremony of these highly prestigious Awards, at the international level, that carry his name.

Within the framework of these institutions which work towards aims of general interest, Felipe focuses his interest on activities in the fields of development projects, voluntary work, the environment, universities, the integration of young people in the workplace and business, relations between business circles and society and social communication.

On the occasion of the United Nations declaration of 2001 as the International Year of Volunteers, the UN Secretary General, Kofi Annan, named Felipe an "Eminent Person" so that he could contribute on an international level towards enhancing the importance of voluntary workers.

Main article: List of titles and honours of Felipe, Prince of Asturias

When Felipe was born, his father did not have any official title or post in Spain, but he was registered in the Civil Registry as Infante, with the style of Royal Highness. About a year after his birth, General Franco recognized Juan Carlos as successor to the Headship of State and bestowed him the title of Prince of Spain. Thus, Felipe became second-in-line in the line of succession to the vacant throne. Juan Carlos became King in 1975, but no title was conferred to Felipe as heir apparent until 2 January 1977, when he was created Prince of Asturias, the title normally held by the heir to the Spanish throne, by a Royal Decree which also entitled him to use "the other historical titles corresponding to the heir of the Crown".[6]

Rarely used, the Prince's style and title in full is: His Royal Highness the Most Serene Infante Don Felipe Juan Pablo Alfonso de Todos los Santos de Borbón y Grecia, Prince of Asturias, Girona and Viana, Duke of Montblanc, Count of Cervera and Lord of Balaguer. Although legally warranted since 1977, Felipe started to use in public the Aragonese-Catalan title of Prince of Girona on 21 April 1990, during a trip around Aragon, Catalonia and Valencia, becoming the first Bourbon to use this title.[7] Later, he did the same thing with the Princedom of Viana in Navarre, and the titles of Duke of Montblanc, Count of Cervera and Lord of Balaguer in their appropriate places. If Prince Felipe succeeds to the throne and uses his first given name as his regnal name, he would be known as Philip VI.

Before 2001, The Prince used this coat of arms unofficially, as it is done now when in Catalonia or Navarre, where a different version of his arms is used, as Prince of Girona and Prince of Viana respectively. It is likely that these arms will also be some day adopted officially, i.e. via Royal Decree.[23]