Charles Boyer (28 August 1899 – 26 August 1978) was a French actor who appeared in more than 80 films between 1920 and 1976.[1] After receiving an education in drama, Boyer started on the stage, but he found success in movies during the 1930s. His memorable performances were among the era's most highly praised romantic dramas, Algiers (1938) and Love Affair (1939). Another famous role was in the 1944 mystery-thriller Gaslight. He received four Academy Award nominations for Best Actor.

Born in Figeac, Lot, Midi-Pyrénées, France, to Maurice and Louise Boyer, Charles was a shy, small-town boy who discovered the movies and theatre at the age of eleven. Boyer performed comic sketches for soldiers while working as a hospital orderly during World War I.[2] He began studies briefly at the Sorbonne, and was waiting for a chance to study acting at the Paris Conservatory.[3] He went to the capital city to finish his education, but spent most of his time pursuing a theatrical career. In 1920, his quick memory won him a chance to replace the leading man in a stage production, and he scored an immediate hit.[2] In the 1920s, he not only played a suave and sophisticated ladies' man on the stage but also appeared in several silent films.

MGM signed Boyer to a contract, and he loved life in the United States, but nothing much came of his first Hollywood stay from 1929 to 1931. At first, he performed film roles only for the money and found that supporting roles were unsatisfying. However, with the coming of sound, his deep voice made him a romantic star.[2]

His first break came with a very small role in Jean Harlow's Red-Headed Woman (1932).[4] After starring in a French adaptation of Liliom (1934) directed by Fritz Lang, he began to receive public favor;[5] Boyer landed his first leading Hollywood role in the romantic musical Caravan (1934) with Loretta Young.[6] French expatriate Claudette Colbert requested him in the psychiatric drama Private Worlds (1935),[2] which was a modest success.[3]

Until the early 1930s, Boyer mainly continued making French films, and Mayerling co-starring Danielle Darrieux in 1936 made him an international star. This was followed by Orage (1938), opposite Michèle Morgan. The offscreen Boyer was bookish and private, far removed from the Hollywood high life. But onscreen he made audiences swoon as he romanced Marlene Dietrich in The Garden of Allah (1936), Jean Arthur in History Is Made at Night (1937), Greta Garbo in Conquest (1937), and Irene Dunne in Love Affair (1939).[2] His first Technicolor film was The Garden of Allah, which established him as a major actor in the U.S.[5] 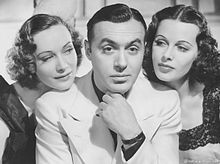 with Sigrid Gurie and Hedy Lamarr in Algiers (1938)

In 1938, he landed his famous role as Pepe le Moko, the thief on the run in Algiers, an English-language remake of the classic French film Pepe le Moko with Jean Gabin. Although he never invited costar Hedy Lamarr to "Come with me to the Casbah" in the movie, this line was in the movie trailer. The line would stick with him, thanks to generations of impressionists and Looney Tunes parodies.[2][7] Boyer's role as Pepe Le Moko was already world famous when animator Chuck Jones based the character of Pepe le Pew, the romantic skunk introduced in 1945's Odor-able Kitty, on Boyer and his most well-known performance.[8] Boyer's vocal style was also parodied on the Tom and Jerry cartoons, most notably when Tom was trying to woo a female cat. (See The Zoot Cat).

Boyer played in three classic films of unrequited love: All This, and Heaven Too (1940), with Bette Davis; Back Street (1941), with Margaret Sullavan; and Hold Back the Dawn (1941), with Olivia de Havilland and Paulette Goddard.[9]

In contrast to his glamorous image, Boyer began losing his hair early, had a pronounced paunch, and was noticeably shorter than leading ladies like Ingrid Bergman. When Bette Davis first saw him on the set of All This, and Heaven Too, she did not recognize him and tried to have him removed.[8]

In 1943, he was awarded an Honorary Oscar Certificate for "progressive cultural achievement" in establishing the French Research Foundation in Los Angeles as a source of reference (certificate). Boyer never won an Oscar, though he was nominated for Best Actor four times in Conquest (1937), Algiers (1938), Gaslight (1944) and Fanny (1961), the latter also winning him a nomination for the Laurel Awards for Top Male Dramatic Performance.

He also did a well-known turn in the 1944 film Gaslight in which he played a thief/murderer who tries to convince his newlywed wife that she is going insane.

In 1947, he was the voice of Capt. Daniel Gregg in the Lux Radio Theater's presentation of The Ghost and Mrs. Muir,[10] played in the film by Rex Harrison. In 1948, he was made a chevalier of the French Légion d'honneur.

When another film with Bergman, Arch of Triumph (1948), failed at the box office, he started looking for character parts. Apart from several French films such as Max Ophuls' The Earrings of Madame de... (1953, again with Danielle Darrieux) and Nana (1955, opposite Martine Carol), he also moved into television as one of the pioneering producers and stars of Four Star Theatre; Four Star Productions would make him and partners David Niven and Dick Powell rich.[2] In 1956, Boyer was a guest star on I Love Lucy.

On March 17, 1957, he starred in an adaptation for TV of the Pulitzer Prize-winning play, There Shall Be No Night, by Robert E. Sherwood. The performance starred Katharine Cornell, and was broadcast on NBC as part of the Hallmark Hall of Fame.[11] He was nominated for the Golden Globe as Best Actor for the 1952 film The Happy Time; and also nominated for the Emmy for Best Continuing Performance by an Actor in a Dramatic Series for his work in Four Star Playhouse (1952–1956).

In 1951, he appeared on the Broadway stage in one of his most notable roles, that of Don Juan, in a dramatic reading of the third act of George Bernard Shaw's Man and Superman. This is the act popularly known as Don Juan in Hell. In 1952, he won Broadway's 1951 Special Tony Award for Don Juan in Hell. It was directed by actor Charles Laughton. Laughton co-starred as the Devil, with Cedric Hardwicke as the statue of the military commander slain by Don Juan, and Agnes Moorehead as Dona Anna, the commander's daughter, one of Juan's former conquests. The production was a critical success, and was subsequently recorded complete by Columbia Masterworks, one of the first complete recordings of a non-musical stage production ever made. As of 2006, however, it has never been released on CD, but in 2009 it became available as an MP3 download.[12] Boyer co-starred again with Claudette Colbert in the Broadway comedy The Marriage-Go-Round (1958–1960), but said to the producer, "Keep that woman away from me".[13] He was also nominated for the Tony Award as Best Actor (Dramatic) in the 1963 Broadway production of Lord Pengo. Later the same year Boyer performed in Man and Boy on the London and New York stage.[14] 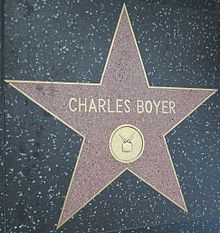 Star on the Hollywood Walk of Fame at 6300 Hollywood Blvd.

Another notable TV series, The Rogues, starred Boyer with David Niven and Gig Young; the show lasted through the 1964–1965 season.

His career lasted longer than other romantic actors, winning him the nickname "the last of the cinema's great lovers."[9] He recorded a very dark album called Where Does Love Go? in 1966. The album consisted of famous love songs sung (or rather spoken) with Boyer's distinctive deep voice and French accent. The record was reportedly Elvis Presley's favorite album for the last 11 years of his life, the one he most listened to.[16]

Later in life, he turned to character parts in such films as: Around the World in 80 Days (1956), How to Steal a Million (1966, featuring Audrey Hepburn), Is Paris Burning? (1966), and Casino Royale (1967). He had a notable part as a corrupt city official in the 1969 film version of The Madwoman of Chaillot, featuring Katharine Hepburn. His last major film role in Hollywood was that of the High Lama in a poorly received musical version of Lost Horizon (1973). A year later, he gave a final outstanding performance in his native language as Baron Raoul in Alain Resnais's Stavisky (1974)

For his contribution to the motion picture and television industries, Boyer has two stars on the Hollywood Walk of Fame at 6300 Hollywood Blvd.

Interesting piece of trivia: Cyndi Lauper mouthed Marlene Dietrich and Charles Boyer's lines from the 1936 film, The Garden of Allah, in her 1984 video, "Time After Time."

In addition to French and English, Boyer spoke Italian, German, and Spanish.[3][17] His only marriage was to British actress Pat Paterson, whom he met at a dinner party in 1934. The two became engaged after two weeks of courtship and were married three months later.[8] Later, they would move from Hollywood to Paradise Valley, Arizona.[18] The marriage lasted 44 years.

In Hollywood, he also was one of the few close friends of the great French actor/singer Maurice Chevalier. He became a naturalized citizen of the United States in 1942.[19][20]

On 26 August 1978, two days after his wife died from cancer, and two days before his own 79th birthday, Boyer committed suicide with an overdose of Seconal while at a friend's home in Scottsdale. He was taken to the hospital in Phoenix, where he died.[18] He was interred in Holy Cross Cemetery, Culver City, California, alongside his wife and son Michael Charles Boyer (1943–1965). On the night of 10 December 1964, at his own 21st birthday party in his LA home, their son Michael shot himself. The media reported his death as a deliberate suicide although the website for his mother, Pat Peterson, suggests that it was the result of being horribly drunk and playing Russian roulette with a loaded gun.[citation needed]