Panelák (Czech: [ˈpänɛlaːk]) is a colloquial term in Czech and Slovak for a panel building constructed of pre-fabricated, pre-stressed concrete, such as those extant in Czech Republic and elsewhere in the former Soviet bloc. Panelák [plural: paneláky] is derived from the standard Czech: panelový dům or Slovak: panelový dom meaning, literally, "panel house / prefabricated-sections house." The term "panelák" is used mainly for the elongate blocks with more sections with separate entrances – simple panel tower blocks are called "věžový dům" (tower house) or "věžák". The buildings remain a towering, highly visible reminder of the Communist era.

According to census statistics, around one in three Czechs still live in a panelák. Similar buildings were built in all communist countries, from Poland (blok mieszkalny, wielka płyta) to Mongolia. There were also attempts to introduce similar structures as public housing in the United States (see Pruitt–Igoe and Cabrini–Green), but almost all ended in failure – sometimes disaster. 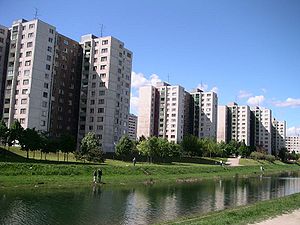 Paneláks resulted from two main factors: the postwar housing shortage and the ideology of Czechoslovak leaders. Planners from the Communist era wanted to provide large quantities of affordable housing and to slash costs by employing uniform designs over the whole country. They also sought to foster a "collectivistic nature" in the people. In case of war, these houses would not be as susceptible to firebombing as traditional, densely packed buildings.

Between 1959 and 1995, paneláks containing 1.17 million flats were built in what is now the Czech Republic. They house about 3.5 million people, or about one-third of the country's population.

The largest concentration of paneláks in the former Czechoslovakia and central Europe can be found in Petržalka (population about 130,000), a section of the Slovak capital of Bratislava.

The city of Most is known for having a dominant share of people living in paneláks (aprox. 80%). The historical city was torn down because of coal mining and the inhabitants were moved into paneláks. 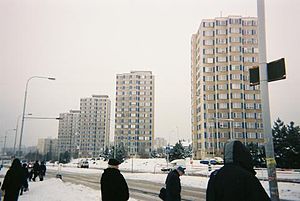 Towering paneláks in the Kamýk area of Prague

In comparison to pre-war apartment buildings, paneláks can be truly enormous. Some are more than 100 metres long, and some are more than 20 stories high. Some even have openings for cars and pedestrians to pass through, lest they have to go all the way around the building.

Paneláks are the butt of many jokes in the Czech Republic and Slovakia. Many people criticize them for low design quality, mind-numbing appearance, second-rate construction materials and shoddy construction practices. In 1990, Václav Havel, then president of Czechoslovakia, called paneláks "undignified rabbit pens, slated for liquidation." Panelák housing estates as a whole are said to be mere bedroom communities with few conveniences and even less character.

However, paneláks are not universally detested. Some panelák housing estates were designed by Czech architects who aspired to follow the tradition of pre-war Czech modern architecture, notably functionalism. Despite unfortunate cost-saving changes during construction, some of those panelák estates do not fit the critique above.

Some housing estates do have other facilities, such as shopping centres, schools, libraries, swimming pools, and cinemas. Also, architects sometimes made an effort to make the buildings distinct, by mixing various types of panelaks, for example, or by using different colours. Well-designed housing estates also have some environmental advantages. By leaving wide spaces between buildings, designers created large green spaces and parks, which are lacking in many prewar Czech neighbourhoods. In some places, paneláks were an improvement in sanitary conditions.

Unlike government-built housing estates in places like the United States and United Kingdom, paneláks today remain home to a mix of social classes, with middle class prevailing (according to sociologist Michal Illner from the Czech Academy of Sciences quoted in [1])

Thus, there is little social stigma associated with living in a panelák. Many apartments are well-appointed inside; there is even a home magazine, Panel Plus, aimed at the millions of panelák-dwellers.

Panelák estates, especially in big cities, are the obvious first targets for builders of telecommunication networks, as the housing estates combine a high concentration of people with easy access to underground and in-house spaces for cables. Panelák housing estates are usually the first neighbourhoods with access to cable tv, WiFi network coverage, cable-modem service, DSL and other telecommunication services.

The attitude of panelák inhabitants to their buildings vary. According to Illner, "people get used to living in paneláks". Many panelák flats are now the property of their inhabitants and whole buildings are managed by syndicates of flat owners. Many buildings have been renovated, often with the support of local governments. Renovations have often included the installation of thermal insulation for energy efficiency and new coats of colourful paint. 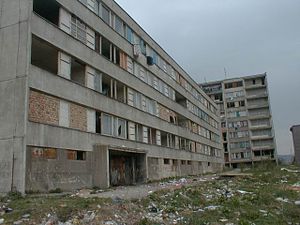 The cost of replacing of paneláks in the short term would be well beyond the means of the Czech Republic or Slovakia. Nonetheless, the decay of many paneláks remains a serious problem requiring the attention of authorities in both countries.

Many Czech sociologists have expressed concern about the social development of panelák housing estates. The most endangered would be those lacking facilities other than "sleeping blocks" and with a bad connection to business and commercial centres. Some people fear that with the growth and deregulation of the housing market, the middle class may flee to other locations, and such panelák estates may become refuges for the poor or ghettos for minorities and immigrants.

Some local authorities are making significant efforts to prevent this scenario by changing bedroom communities into multifunctional urban neighbourhoods. This may include support for the construction of missing facilities, such as shopping centres or churches. Governments may also invest in improving transport accessibility, as with the new light rail line to Barrandov in Prague.

The Chánov housing estate in Most, Czech Republic, is an example of what planners are trying to avoid. In the 1990s, middle-class residents moved out in response to an influx of Romany immigrants. Many of the remaining residents lacked jobs, money, education and the social skills needed for life in an urban environment. The water was cut off due to unpaid bills; elevators stopped working; and garbage piled up in mounds. A public-private partnership is now working on improving living conditions in the housing estate.

The term panelák refers specifically to buildings in the former Czechoslovakia. However, similar buildings were built in other Communist countries and even in the West.

In Hungary, these buildings (called "panelház", or shortly "panel") are long associated with the working class and the unemployed, thus bearing a social stigma.

In Bulgaria, they are colloquially known as "panelki", and are the predominant type of en masse housing throughout the country.

Most buildings in soviet era Microdistricts are panel buildings .