The planned destruction of Warsaw refers to the largely realised plans by Nazi Germany to completely raze the city. The plan was put into full motion after the Warsaw Uprising in 1944. The uprising had infuriated German leaders who now wanted to make an example of the city, which they had long before selected for a major reconstruction as part of their plans to "Germanize" Eastern Europe:

The city must completely disappear from the surface of the earth and serve only as a transport station for the Wehrmacht. No stone can remain standing. Every building must be razed to its foundation.
—SS chief Heinrich Himmler, October 17, SS officers' conference[1]

Considerable resources were diverted to the destruction of the city, which was soon to fall back into Allied hands. Most of the buildings and an immense part of the cultural heritage were demolished or burned to the ground. After the war, extensive work was put into rebuilding the city according to pre-war plans and historical documents.

Destruction of the Polish capital was planned before its final destruction in 1944 and even before the start of World War II. On June 20, 1939 while Adolf Hitler was visiting an architectural bureau in Würzburg am Main, his attention was captured by a project of a future German town – Neue deutsche Stadt Warschau. According to the Pabst Plan, Warsaw was to be turned into a provincial German city of 130,000. Third Reich planners drafted precise drawings outlining a historic Germanic core where a select few landmarks would be saved such as the Royal Castle which would serve as Hitler's state residence. The Plan, which was composed of fifteen drawings and a miniature architectural model, was named after German army architect Friedrich Pabst who refined the concept of destroying a nation's morale and culture by destroying its physical and architectural manifestations. The design of the actual new German city over the site of Warsaw was devised by Hubert Gross. The project was soon incorporated into Generalplan Ost. The aftermath of the failure of the Warsaw Uprising presented an opportunity for Hitler to begin the realization his pre-war conception.[3] 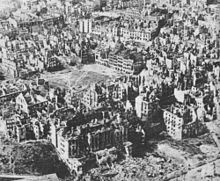 Most of Warsaw was destroyed by the German forces during the war. Shown is Old Town Market Place, dated January 1945.

In December 1939 the first mass shootings of civilians takes place in the Kampinos Forest near Warsaw where by 1943 thousands would be killed. In 1940 round-ups (lapanki) of civilians on streets and in homes became the norm. Those who did not manage to escape were sent to death camps at Auschwitz and Majdanek or forced into slave labour in Germany. The Nazis divided Warsaw into a Jewish sector, a Polish sector and a German sector. The programme of annihilation and ethnic cleansing was systematically carried out starting with Polish Jews and Jews from other areas shipped into the Warsaw ghetto.

In 1940, the Germans turned the northern part of mid-town Warsaw, about one square mile in size, into the Jewish ghetto surrounded by ten foot high walls and watch-towers. The population would eventually swell to 500,000 by some estimates. Between July 22 and October 3, 1942 the ghetto was "evacuated." More than 300,000 inhabitants perished in the gas chambers, the 70,000 remaining in the ghetto were employed as slave labourers supplying the German army. In December 1943 Nazis undertook the final destruction of the ghetto which triggered the ghetto uprising. The uprising was put down mercilessly and the whole district razed to the ground.

Elsewhere in Warsaw collective responsibility was the rule resulting in the murders of thousands, which resulted in the Warsaw Uprising on August 1, 1944. In response, under orders from Heinrich Himmler, Warsaw was kept under ceaseless barrage by Nazi artillery and air power for sixty-three days and nights with Erich von dem Bach, SS-Gruppen-fuhrer and Police General who took over from Reinefarth at the helm. Von dem Bach later wrote about his meeting with Reinefarth: "Reinfarth drew my attention to the existence of a clear order issued by Himmler. The first thing he told me was that he has been distinctly ordered not to take any prisoners but to kill every inhabitant of Warsaw. I asked him, 'women and children, too?' to which he replied, 'Yes, women and children, too...'" In the wake of this unprecedented planned destruction and ethnic cleansing, by 1944 800,000 civilians were killed, or 60% of the population.

A few days after the outbreak of the uprising Hans Frank wrote in his diary: "Almost all Warsaw is a sea of flames. To set houses afire is the surest way to deprive the insurgents of their hiding places. When we crush the uprising, Warsaw will get what it deserves – complete annihilation."

In 1944 a large transit camp (Durchgangslager) was constructed in Pruszków's Train Repair Shops (Zakłady Naprawcze Taboru Kolejowego) to house the evacuees expelled from Warsaw. In the course of the Warsaw Uprising and its suppression, the Germans deported approximately 550,000 of the city’s residents and approximately 100,000 civilians from its outskirts, sending them to Durchgangslager 121 (Dulag 121). The security police and the SS segregated the deportees and decided their fate. Approximately 650,000 people passed through the Pruszków camp in August, September, and October. Approximately 55,000 were sent to concentration camps, including 13,000 to Auschwitz. They included people from a variety of social classes, occupations, physical conditions, and ages. Evacuees ranged from infants only a few weeks old to the elderly, aged 86 or more. In a few cases, these were also people of different ethnic backgrounds, including Jews living on "Aryan papers."[4]

Some people hid in the deserted city. They were called Robinson Crusoes of Warsaw (after Robinson Crusoe) or cavemen. Germans called them rats and killed them if they were found within the city ruins. The best known Robinson of Warsaw was Władysław Szpilman. Szpilman's experiences were adapted into The Pianist.

Looting and destruction of buildings 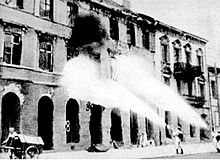 After the remaining population had been expelled, the Germans begun the destruction of the remnants of the city.[7] Special groups of German engineers were dispatched throughout the city in order to burn and demolish the remaining buildings. According to German plans, after the war Warsaw was to be turned into nothing more but a military transit station.[1][8] The demolition squads used flamethrowers and explosives to methodically destroy house after house. They paid special attention to historical monuments, the Polish national archives, and other places of interest whose destruction was carried out under the supervision of German scholars. Nothing was to be left of what used to be a city.[2]

By January 1945, about 85% of the buildings had been destroyed; 10% as a result of the September 1939 campaign and other combat, 15% during the earlier Warsaw Ghetto Uprising, 25% during the Uprising, and 35% due to systematic German actions after the uprising.[7] 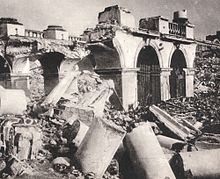 Remains of the Saxon Palace and the Tomb of the Unknown Soldier, 1945.

Material losses were estimated at 10,455 buildings, 923 historical buildings (94%), 25 churches, 14 libraries including the National Library, 81 primary schools, 64 high schools, the University of Warsaw, the Warsaw University of Technology, and most of the city's historical monuments.[7] Almost a million inhabitants lost all of their possessions.[7] The exact losses of private and public property, including pieces of art, other cultural artifacts and scientific artifacts, is unknown but considered to be substantial. Studies done in the late 1940s estimated total damage at about US$30 billion.[9] In 2004, the President of Warsaw, Lech Kaczyński (later President of Poland) established a historical commission to estimate losses to public property alone that were inflicted on the city by German authorities. The commission estimated the losses to be at least $31.5 billion.[10] Those estimates were later raised to $45 billion and in 2005, to $54.6 billion (all equated to 2004 dollars).[11]

The destruction of the city was so severe that in order to rebuild much of Warsaw a detailed landscape of the city, painted by the Italian artists Marcello Bacciarelli and Bernardo Bellotto, which had been commissioned by the government before the Partitions of Poland had to be used as a model to recreate most of the buildings.

Notable dates in the history of destruction of Warsaw:

Alfred Mensebach, one german architect and a number of camera teams documented the destruction.

The city of Warsaw was rebuilt, with the Old Town being thoroughly reconstructed, and the New Town being partially restored to its former state. 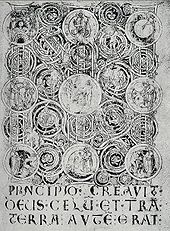 The 12th-century Meuse School Bible, one of the books burned by the Germans in October 1944.

During the German suppression of the Warsaw Uprising of 1944 around 70 to 80% of libraries were carefully burned by the Verbrennungskommandos (Burning Detachments), whose mission and specialty were to burn Warsaw.[12] In October 1944 the Załuski Library, the oldest public library in Poland and one of the oldest and most important libraries in Europe (established in 1747), was burned down.[13] Out of about 400,000 printed items, maps and manuscripts, only some 1,800 manuscripts and 30,000 printed materials survived.[13]

In the last phase of the Warsaw Uprising and after its collapse, in September and October 1944, the three major private libraries in Warsaw (Krasiński Library, Przeździecki Library and Zamoyski Library), including collections of priceless value to Polish culture, ceased to exist.[14] Those libraries have already suffered in September 1939, bombed and burned.[14] 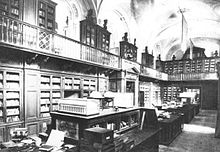 Interior of the Zamoyski Estate Library in a building at Żabia Street.

Important collection of books belonging to the Krasiński Estate Library, created in 1844, was largely destroyed in 1944.[15] The collection originally consisted of 250,000 items.[15] During the Uprising, on September 5, 1944, the library's warehouses were shelled by German artillery and burned almost completely.[15] Some of the books were preserved, thrown through windows by the library's staff.[15] The surviving collection was later deliberately burned by the Germans in October 1944 after collapse of the Uprising.[15] About 26,000 manuscripts, 2,500 incunables, 80,000 early printed books, 100,000 drawings and printmakings, 50,000 note and theater manuscripts as well as a large collection of maps and atlases were lost.[15] The Przeździecki Estate Library in 6 Foksal Street included 60,000 volumes and 500 manuscripts, rich archive containing 800 parchment and paper documents, as well as the rich cartographic collection consisting of 350 maps, atlases and plans.[14] In addition to 10,000 prints and drawings, there was a rich art gallery (Portrait of Casimir Jagiellon from the 15th century, Portrait of John III Sobieski from the Schleissheim Palace, the House altar of Sophia Jagiellon, 1456), valuable collection of miniatures and decorative art: textiles, porcelain, faience, glass, gold objects, military, etc.[14] It burned down on September 25, 1939 as a result of severe aerial bombardment by the Germans (incendiary bombing).[14] The surviving items sheltered in the neighbouring tenement house at Szczygla Street were burned in October 1944.[14] The last of above mentioned libraries, the Zamoyski Estate Library, acquired collections of 70,000 works (97,000 volumes), more than 2,000 manuscripts, 624 parchment diplomas, several thousand manuscripts, a collection of engravings, coins and 315 maps and atlases.[14] Library collections also gathered numerous collections of art: a rich collection of militaria, miniatures, porcelain, faience and glass, natural collections, research tools etc.[14] In 1939 about 50,000 items (about 30%) were destroyed in bombing.[14] On September 8, 1944, the Germans set fire to both the Zamoyski Palace (Blue Palace) and the library building.[14]

The Central Military Library, containing 350,000 books on the history of Poland, was destroyed, including the Library of Polish Museum in Rapperswil deposited there for safekeeping. The collection of the Rapperswil Library was transported to Poland in 1927.[16] The library and the museum were founded in Rapperswil, Switzerland, in 1870 as "a refuge for [Poland's] historic memorabilia dishonored and plundered in the [occupied Polish] homeland" and for the promotion of Polish interests.[17] The greater part of library's collections, originally 20,000 engravings, 92,000 books and 27,000 manuscripts, were deliberately destroyed by the Germans in 1944.[16]

Unlike earlier Nazi book burnings where specific books were deliberately targeted, the burning of those libraries was part of the general burning of a large part of the city of Warsaw.[18] This resulted in the disappearance of about sixteen million volumes in Poland during World War II.[12]