Municipal annexation is a process in the United States whereby a city government expands the city limits into adjacent areas not already incoporated into cities, villages or other municipalities, and sometimes when they were. This was the usual response of a city to urbanization in neighboring areas which seek municipal services or a city which seeks control over its suburbs, in the 19th and early 20th centuries, although its use has been continued.

In the United States, all local governments are considered "creatures of the state" according to Dillon's Rule, which resulted from the work of John Forrest Dillon on the law of municipal corporations. Dillon's Rule implies, among other things, that the boundaries of any jurisdiction falling under state government can be modified by state government action. For this reason, examples of municipal annexation are distinct from annexations involving sovereign states.

In 1909 the city of Atlanta, Georgia, then located only in Fulton County, annexed into part of neighboring DeKalb County (from which Fulton County had originally been divided). Because the original county borders retain legal significance, the expansion into two counties provides some problems such as when police arrest suspects on charges set forth in Georgia state law and city police must determine to which county's jail they must be taken. 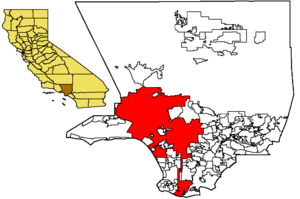 A "shoestring annexation" is a term used in the United States for an annexation by a city, town or other municipality in which it acquires new territory that is contiguous to the existing territory but is only connected to it by a thin strip of land.[1][2] It is sometimes called a "flagpole annexation" because the territory resembles a flagpole, in which the connection is the "pole" and the annexed territory the "flag".[3]

In some states (for example, Texas)[4] municipalities are prohibited from annexing land not directly connected to their existing territory. A shoestring or flagpole annexation allows the municipality to do so.

Such annexations are sometimes used when a municipality seeks to acquire unincorporated developed land, such as a newly built subdivision separated from it by undeveloped open space. They may also be used when a municipality desires to annex a commercial or industrial area without taking over intervening residential areas, so as to collect tax revenues from the businesses or industry without having to provide services (such as electricity and garbage collection) to residents. Such uses of the technique are often criticized and derided as a form of gerrymandering, and have in fact been used for the purpose of manipulating vote distribution among election precincts and districts.

A related strategy is called strip annexation, which involves annexing a narrow strip that encloses a large block of unincorporated land. Strip annexation was widely used by the municipalities of the Phoenix metropolitan area during the 1970s to preemptively gain control of large areas of land before other municipalities, without having to annex more than a thin strip surrounding a large so-called county island. The strip protected the county island from being annexed by other municipalities, thus giving the strip-annexing municipality the ability to slowly annex portions of the county island over time. One such annexation by Chandler in 1974 spurred nearby Gilbert to create the largest county island to date by annexing a strip no more than 200 feet wide that enclosed 51 square miles of unincorporated Maricopa County. The annexation was challenged in court and, although found legal, eventually led to new legislation outlawing strip annexation, in 1980. Some municipalities rushed to annex before the law took effect, such as Scottsdale, which annexed a 10 foot wide strip enclosing an 86 square mile county island.[5] The term "strip annexation" is sometimes also used in the "shoestring" or "flagpole" sense. 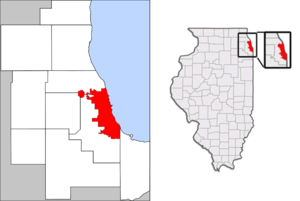 A map of the city of Chicago showing the connection into DuPage County for O'Hare International Airport.

The Boston neighborhoods of Allston and Brighton were part of an independent town of Brighton before being annexed by Boston. However, at the time Brookline extended to the Charles River and separated Boston and Brighton. As a result, a shoestring annexation was obtained by Boston from Brookline when Brighton joined Boston. This was made necessary by Brookline's refusal to join Boston a year before Brighton's annexation.

The Port of Los Angeles together with the San Pedro, Wilmington and Harbor City neighborhoods of Los Angeles, are connected to the main part of the city by what is called locally the "Shoestring Strip" between Figueroa Street and Vermont Avenue (and between Western and Normandie avenues to the south).

O'Hare Airport is municipally connected to the city of Chicago via a narrow strip of land, approximately 200 feet wide, running along Foster Avenue from the Des Plaines river to the airport. This land was annexed into the city limits in the 1950s to assure the airport was contiguous with the city to keep it under city control. The strip is bounded on the north by Rosemont and the south by Schiller Park.[6]

Santa Barbara Municipal Airport is municipally connected to the city of Santa Barbara, California by a 7 miles (11 km) long, 300 feet (90 m) wide corridor, most of which lies under the Pacific Ocean.[7]

The 2005 annexation of Elkhorn, Nebraska by Omaha.