Chartres (French pronunciation: [ʃaʁtʁ]) is a commune and capital of the Eure-et-Loir department in northern France. It is located 96 km (60 mi) southwest of Paris.

Chartres is built on the left bank of the Eure River, on a hill crowned by its famous cathedral, the spires of which are a landmark in the surrounding country. To the south-east stretches the fruitful plain of Beauce, the "granary of France", of which the town is the commercial centre.

Chartres was one of the principal towns of the Carnutes, and by the Romans was called Autricum, from the river Autura (Eure), and afterwards civitas Carnutum. The name "Chartres" derives from "Carnutes". It was burnt by the Normans in 858, and unsuccessfully besieged by them in 911.

During the Middle Ages it was the chief town of Beauce, and gave its name to a countship which was held by the counts of Blois and Champagne and afterwards by the house of Châtillon, a member of which in 1286 sold it to the crown. It was raised to the rank of a duchy in 1528 by Francis I. After the time of Louis XIV the title of duke of Chartres was hereditary in the family of Orléans.

In 1417 it fell into the hands of the English, from whom it was recovered in 1432. It became seat of a Duchy in 1528. During the Wars of Religion, it was attacked unsuccessfully by the Protestants in 1568, and was taken in 1591 by Henry IV, who was crowned there three years afterwards.

In the Franco-Prussian War it was seized by the Germans on 2 October 1870, and continued during the rest of the Campaign to be an important centre of operations.

The city suffered heavy damage by bombing in the course of World War II, but the Cathedral of Chartres was spared by an American Army officer who challenged the order to destroy it.[1]

Following deep reconnaissance missions in the region by the 3rd Cavalry Group and units of the 1139 Engineer Combat Group, and after heavy fighting in and around the city, Chartres was liberated, on 18 August 1944, by the U.S. 5th Infantry and the 7th Armored Divisions belonging to the XX Corps of the 3rd US Army commanded by General George S. Patton.[3] 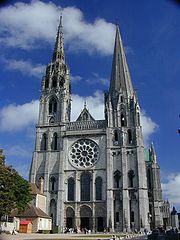 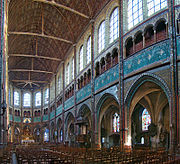 The Church of Saint Aignan.

The town is best known for the Cathedral of Chartres (French: Cathédrale Notre-Dame de Chartres), widely considered to be the finest Gothic cathedral in France. Its historical and cultural importance is recognized by its inclusion on the UNESCO list of World Heritage Sites. Its construction started in 1205, following the destruction of the old cathedral of Chartres. Construction took 66 years.

The abbey church of St.Pierre, dating chiefly from the 13th century, contains, besides some fine stained glass, twelve representations of the apostles in enamel, created about 1547 by Léonard Limosin. Of the other churches of Chartres also noteworthy are St Aignan (13th, 16th and 17th centuries) and St Martin-au-Val (12th century).

The Eure River, which at this point divides into three branches, is crossed by several bridges, some of them ancient, and is fringed in places by remains of the old fortifications, of which the Porte Guillaume (14th century), a gateway flanked by towers, is the most complete specimen. The steep, narrow streets of the old town contrast with the wide, shady boulevards which encircle it and divide it from the suburbs. The Cbs St Jean, a pleasant park, lies to the north-west, and squares and open spaces are numerous.

The hotel de ville, a building of the 17th century, containing a museum and library, an older hotel de ville of the 13th century, and several medieval and Renaissance houses, are of interest. There is a statue of General F. S. Marceau-Desgraviers (b. 1769), a native of the town.

Chartres is one of the most important market towns in the region of Beauce (known as "the granary of France").

The game pies and other delicacies of Chartres are well known, and the industries also include flour-milling, brewing, distilling, iron-founding, leather manufacture, perfumes, dyeing, and the manufacture of electronic equipments, car accessories, stained glass, billiard requisites and hosiery.

The Gare de Chartres railway station offers frequent services to Paris, and a few daily connections to Le Mans, Nogent-le-Rotrou and Courtalain. The A11 motorway connects Chartres with Paris and Le Mans.

Chartres has the second most important squash club in France. In 2013, Chartres will organize the World Team Squash Championships.

There is also a handball club and it is playing in the French second division.

The town is the seat of a bishop, a prefecture, and a court of assizes. It has tribunals of first instance and of commerce, a chamber of commerce, training colleges, a high school for boys, a communal college for girls, and a branch of the Bank of France.

Chartres has been a site of Christian pilgrimage since the Middle Ages. The poet Charles Péguy (1873–1914) revived the pilgrimage route between Paris and Chartres before the First World War. After the war, some students carried on the pilgrimage in his memory. Since the 1980s, the association Notre-Dame de Chrétienté <http://www.nd-chretiente.com>, with offices in Versailles, has organized the annual 100 km (62 mi) pilgrimage on foot from the cathedral of Notre-Dame de Paris to the cathedral of Notre-Dame de Chartres. About 15,000 pilgrims, mostly young families from all over France, participate every year.

Chartres was the birthplace of:

Chartres is twinned with: