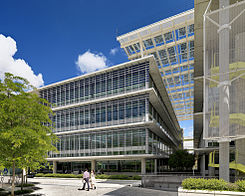 Abengoa is a Spanish multinational corporation, which includes companies in the domains of energy, telecommunications, transportation, and the environment. On September 15, 2007, The Economist reported that Abengoa is looking to enter the concentrating solar power market in the United States.

The company was founded by Javier Benjumea, and is based in Seville, Spain.

Befesa is an Abengoa subsidiary, specialising in the integral management of industrial wastes and the generation and management of water.

Abengoa began its involvement in the development of solar technologies in 1984 with the construction of the Solar Almeria Platform in Spain.

Abengoa Solar has announced the award of two R&D projects in the field of Concentrating Solar Power (CSP) by the US Department of Energy that total over $14 million. The goal of the DOE R&D program, working in collaboration with partners such as Abengoa Solar, is to develop C.S.P. technologies that are competitive with conventional energy sources (grid parity) by 2015 [3].

On July 3, 2010, US President Barack Obama announced that the US Department of Energy had conditionally committed to offering a $1.45 billion loan guarantee to support construction by Abengoa Solar of the Solana Generating Station, in Arizona.[4]