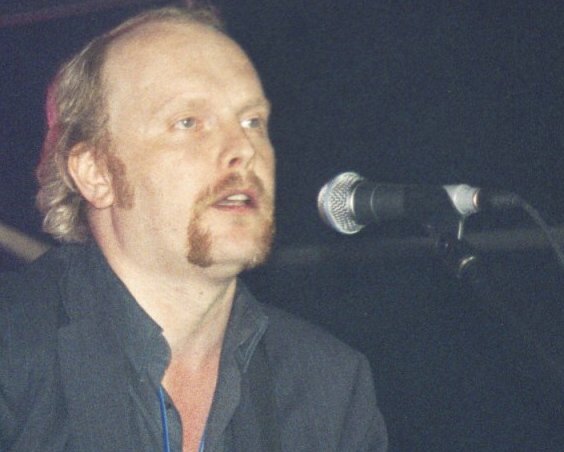 Luke Haines (born , ) is an English and , who has recorded music under various names and with various bands, including and Black Box Recorder.

Haines formed numerous bands when he was at school. At college he joined who recorded two commercially unsuccessful albums. It was only when Haines formed with his girlfriend Alice Readman (who had also been in The Servants) and Glenn Collins in 1990 that he began to achieve some success.

Regular gigging in the area and an NME sponsored gig brought them to the attention of Hut Records. They released their first single, "Showgirl" in 1992, and their debut album "New Wave" a month later. Haines was later to claim that this was the album that started , though he later showed disdain towards the movement, stating in a 2003 interview that Britpop consisted of "a bunch of bands who weren't good enough to exist in their own right, like music's equivalent of the ." Certainly it was ahead of its time in turning back from the then popular to more traditional songwriting in the vein of or . It is arguable that more commercially successful bands (such as Suede) owed much to Haines' vision. In any case, the album did well commercially (for a first album) and was nominated for a .

The band toured the UK and the USA, gaining generally good reviews: however it is the opinion of the NME that the band were better in the studio than live.

A brush with fame

Their second album, "Now I'm a Cowboy" (1994) featured "Lenny Valentino" one of their most famous songs. By now the band were touring Europe and the States regularly, and were gaining a reputation as one of the best new British bands.

However, just as the band looked like 'breaking through' to the mainstream (as other British bands, such as Oasis and Blur were then doing), Haines broke both of his ankles, resulting in the cancellation of much of their 1994 European tour. At the time he claimed "I jumped off a fifteen-foot wall (while) touring, ... to finish the tour and get the insurance" but later, in the sleeve notes to Das Capital, he denied that it was deliberate, writing "I merely drank too much wine and fell over. It happens." In a wheel chair for most of 1995, Haines wrote the very different songs that would end up becoming the Auteurs' third album, "After Murder Park". Even bleaker and more introspective than previous Auteurs albums, this was just as English as his previous work but now showed very different influences: the downbeat folk of Richard Thompson, the aggression of , the pared down experimentalism of , and the caustic lyrics of The Fall. It benefited from spare production by . Recorded, ironically, at at the height of Britpop, this was a distinctly anti-Britpop album.

After 'After Murder Park'

At this point, Haines created a solo side project called Baader-Meinhof. Haines released one eponymous album under this moniker in 1996, which is named after the terrorist group. The sound was similar to that of , but more sparsely produced and with elements of and , with lyrics, typically for the ever-contrary Haines, about terrorism.

After this, Haines disbanded the Auteurs, only to bring them back together again for their fourth album "How I Learned to Love the Bootboys". This sounds like an amalgamation of Haines' previous styles: it is electronic, but has the same concern for pop hooks as his first two albums: on the other hand, the lyrics are brooding and obsessive, in a similar way to those on "After Murder Park". From this point on, The Auteurs became merely a name for whatever musicians Haines chose to bring together for specific projects.

After this album Haines created another side project with John Moore (formerly of ) and Sarah Nixey: Black Box Recorder. With a sound clearly influenced by and the ambient sound of French bands such as Air, the band produced three commercially successful albums, "England Made Me", "The Facts of Life", and "Passionoia". There is also a B-sides collection, "The Worst of Black Box Recorder". "The Facts of Life" produced the eponymous single, which has been the biggest hit of Haines' career so far.

Recently Haines has branched into film music, writing the music for "Christie Malry's Own Double Entry", a British film based on the novel by .

He has also produced a solo album under his own name, "The Oliver Twist Manifesto". However, perhaps realising that he will always be best known as the creative force behind The Auteurs, Haines continues to reform them and remake their songs in a variety of ways. The Auteurs 'Best of' album "Das Capital" (sic) consisted of Auteurs songs reworked by a classical orchestra in a typically eccentric fashion.

A box set covering his career to date, "Luke Haines is Dead," was issued in 2005, and two new albums were expected in 2006: 'Off My Rocker At The Art School Bop', and the soundtrack to the abandoned musical 'Property', which like his Black Box Recorder work, also features Sarah Nixey.

Records released a "Best of The Servants" compilation, with sleeve notes by Haines, early in 2006.

New album "" was released in October 2006. Haines has been working with maverick pop producer (, , ) on some tracks. The album was preceded by a double A-sided single 'Off My Rocker At The Artschool Bop ( version) b/w I Am The Best Artist/Skinny White Girls.' There is currently no news on a release date for the 'Property' soundtrack.

Haines toured the UK and Ireland during November 2006. John Moore guested on bowed saw and backing vocals at some gigs. [ [http://johnmoore23.blogspot.com/ John Moore ] ]

On Haines played a live session (three songs) for 's show. During an interview on the same show Haines said that he may play some gigs in early 2007 in support of a E.P. release of Leeds United.

In December 2007, Black Box Recorder teamed up with Art Brut to create the single "Christmas Number One" under the collaborative title of The Black Arts. [ [http://www.drownedinsound.com/articles/2588911 Drowned in Sound - News - Eddie Argos joins race for Christmas number one ] ]

In issue four of the comic book "Phonogram", Haines appears as a spirit guide leading the main character through a metaphorical land representing .

;"From Back With The Killer EP""Kenneth Anger's Bad Dream"
*, avant-garde film maker, devotee of .

;From "After Murder Park""Light Aircraft on Fire"
*, monarch.

"Kill Ramirez"
*, member and wannabe who died in the foiled hijacking of in 1970.
*, another member who took part in the above incident but survived.

"How I Learned to Love the Bootboys"
*, Jamaican DJ.

"The Spook Manifesto"
*, writer and lover,
*, occultist,
*,
*Prinz Ragoczy, an alias of the , occultist, who allegedly claimed to be the son of .

"The Walton Hop"
*, pop impresario and convicted paedophile,
*, pop band, in the original lyrics to "The Walton Hop"."'Here's to Old England"
*, Tory politician,
*, boxer,
*, serial killer,
*, pseudonym adopted by the killer of ,
*, footballer,

"The Deverell Twins"
*The , drowned in the Thames in the 19th century.