The Sri Lanka Armoured Corps (SLAC) is currently a collection of six regular regiments and a volunteer (reserve) regiment. It has an independent Armoured Brigade and provides the armour capability of the Sri Lankan Army, with vehicles such as the T-55, T-55AM2, and Type 69 main battle tanks, the BMP infantry fighting vehicle and the BTR-80, and WZ551 armoured personnel carriers. It is headquartered at Rock House Army Camp, Colombo.

With formation of the Ceylon Army, a cavalry arm was considered and to this end the 1st Reconnaissance Squadron was established on October 10, 1955 under the command of Major (later General) D. S. Attygalle, LVO who would go on to become the commander of the Sri Lankan Army. With its expansion to a formation reconnaissance regiment in 1958, thus becoming the Ceylon Armoured Corps and the first armoured unit of the Ceylon Army. The 1st Reconnaissance Regiment became allied to and inherited the traditions of the Queen's Dragoons Guards of the British Army. The regimental headquarters was moved from Echelon Barracks to Rock House Army Camp in Colombo in 1957, which it still occupy.

The CAC was deployed on several occasions in the 1950s and 1960s on flood relief and internal security operations. It was deployed for combat operations during the 1971 Insurrection against the JVP first in Kurunegala and thereafter in Anuradhapura. When Sri Lanka became a republic in 1972, the CAC became the Sri Lanka Armoured Corps.

Since the 1980s with escalation of the Sri Lankan civil war the SLAC has taken part in almost all the major combat operations in the northern and eastern provinces of the country as well as being stationed in the southern parts of the country. To meet the threat of the terrorists the SLAC has increased its strength of both personnel and armoured vehicles. This resulted in the Armoured Brigade being raised, in 1988 under the command of Brigadier (later Major General) Y Balaratnarajah, USP who became the first Armoured Brigade Commander, he would later become Chief of Staff of the Army. The armoured Brigade's components, namely the 3rd Reconnaissance Regiment was raised in 1988 (converted to the 3rd Armoured Regiment in 2009), the first tank regiment, the 4th Armoured Regiment was raised in 1991 followed by the 5th Regiment raised in 1993 and Four reinforcement regiments were formed in 1997, 1998 and 2008. The commander of the armoured brigade/director armour is always an officer of armoured corps holding the rank of Brigadier.

In recent years the corps has developed its own assault troopers to provide close combat support in the form of mechanized infantry. It operates the army's armoured recovery vehicles and armoured vehicle-launched bridgeing units. In 1998 the SLAC was presented with the President's Standard in recognition of the service it has rendered. At present the SLAC has nine regular regiments, one volunteer regiment and a regimental band. 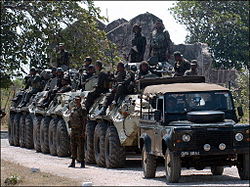 SLAC units in a combat operation.

At its inception the 1st Recce Squadron was equipped with British Ferret Mk I Scout Cars[1] along with BSA M20 with side cars that were armed with LMGs. By the end of the 1950s BSA M21 motorcycles, Ferret Mk II Scout Cars and Daimler Armoured Cars where added to the Ceylon Armoured Corps.[1]

As the norther insurrection blew out into a full scale civil war the Sri Lankan Army turned towards new sources of heavier weaponry such as the Soviet Union, Yugoslavia, China and the Czech Republic.

The APCs enabled the Armoured Corps to have their own assault troopers to provide close combat support.