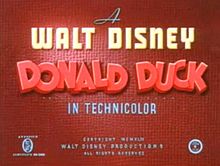 The title card of a Donald Duck short film; the design is typical of those used in Disney shorts during the studio's partnership with RKO Radio Pictures (1936-1954)

*Edited into The Many Adventures of Winnie the Pooh

*Edited into The Many Adventures of Winnie the Pooh

In a recent interview with a Disney spokesperson, it was revealed that all planned "classic character" shorts have been put on hold in hopes to access a wider audience through other media outlets.[9]