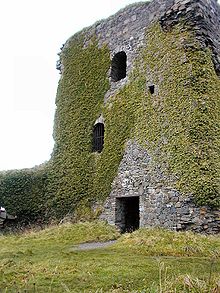 Dunollie Castle (Scottish Gaelic: Dùn Ollaigh) is a small ruin located on a hill north of the town of Oban, on the west coast Scotland. It commands a view of the town, harbour and, outlying isles. The ruin is accessible by a short, steep path. There is no entrance fee, there is a small layby at the foot of the hill. With enough space to park two cars, care must be taken because the layby is on a busy road.

There was a fortification on this high promontory in the days of the kingdom of Dál Riata which was the royal centre of the Cenél Loairn.

Ewan MacDougall, the third chief of the MacDougalls, probably built a castle there in the 13th century. The existing castle ruins date from the 15th century.

The MacDougalls, the Lords of Lorne, were direct descendants of Somerled, Lord of the Isles, at a time when the Western Isles were part of Norway. Dougall, Somerled’s son held most of Argyll and also the islands of Mull, Lismore, Jura, Tiree, Coll and many others in the 12th century.

The MacDougalls lost the land after siding with MacDougall kinsmen, the Comyns, and fighting against Robert the Bruce. John Stewart of Lorne returned the estates to the clan.

In recent years, descendants and members of Clan MacDougall have been encouraged by clan leadership to support local tourism and pay visits to Dunollie, as an ancestral site and important cultural location.