From 1997 through 2006 the winner of the game was the home team. The streak was snapped in 2007, when Oregon State University beat the University of Oregon at Autzen Stadium 38-31 in double overtime. In 2008, the Ducks returned the favor in Corvallis by beating OSU 65-38. The streak of visiting teams winning was snapped at two games in 2009 when the Ducks won 37-33 in Eugene.

Other athletic contests (most notably, men's and women's basketball) between the schools are also referred to as Civil War games.

1933: In a game played before 32,183 spectators at Multnomah Stadium in Portland, both teams came into the game undefeated: the Beavers were 5–0–2 and the Ducks were 7–0. The Beavers scored first, but the rest was all Oregon, with fullback (and future Chicago Cardinal) "Iron Mike" Mikulak rushing for 89 yards on the way to a 13–3 victory. The Ducks won a share of the PCC championship, but Stanford got the bid to the 1934 Rose Bowl.[4]

1957: The Ducks had a 6–1 conference record and the Beavers were 5–2. A Beaver win at Hayward Field would give them a share of the conference title, but since the Beavers had been to the 1957 Rose Bowl, the Pacific Coast Conference's no-repeat rule meant that no matter what, the Ducks were headed for the 1958 Rose Bowl, their first Rose Bowl appearance since 1920. Both teams scored on their first possession, but that ended the scoring until late in the third quarter, when Beaver kicker Ted Searle put Oregon State on top, 10–7. A late fumble by the Ducks' Jim Shanley secures the win—but not the Rose Bowl—for the Beavers.[4][5]

1959: The Ducks came into the game with just one loss. An Oregon win, coupled with a Washington loss, could have earned the Ducks a Rose Bowl invitation. Meanwhile, Oregon State was 2–6, its first losing record in 5 years. The Beavers started shakily, fumbling on their first two possessions and falling behind 7–0 in the first quarter. The rest was all Beavers as they salvaged their season with two touchdowns and a field goal to upset the Ducks, 15–7.[4][6]

1969: With the score tied 7–7 and less than a minute to play, Oregon State placekicker Mike Nehl attempted a 29-yard field goal to put the Beavers ahead. Nehl had already had one field goal blocked and missed one field goal on the day, and this one was blocked by Oregon's Jim Franklin, hit an official, bounced off the foot of Oregon linebacker Don Graham, and was recovered by Oregon State tight end Bill Plumeau at the Duck 4 yard line. Nehl again came on to try his fourth field goal, and this time, connected on a 21-yard kick to give the Beavers a 10–7 win—the sixth on the way to what would be eight straight OSU Civil War wins.[4]

1983: Played during a rainstorm and pitting two mediocre squads against each other, the game ended in a scoreless tie and is commonly known as the "Toilet Bowl" because of the poor quality of play exhibited in the game. It was not a steadfast defensive struggle: there were eleven fumbles, five interceptions, and four missed field goals. It was the last NCAA Division I football game to end in a scoreless tie, and with the introduction of overtime into NCAA football (which eliminated ties), it is unlikely to ever happen in the future, unless a subsequent rule change allows tie games to once again occur.[4]

1987: Oregon earned the most lopsided victories in the Civil War series, a 44-0 drubbing led by Ducks quarterback Bill Musgrave.[4]

1988: The Beavers had not won a Civil War in 13 years coming into the game, and Oregon head coach Rich Brooks had not lost a Civil War in 21 attempts as either a Ducks coach or Beavers coach or player. Both streaks ended on this day, with the Beavers posting a solid 21–10 victory that included two fourth-quarter touchdowns.[4]

1994: Oregon needed a win in front of a hostile Parker Stadium crowd to secure a bid to the 1995 Rose Bowl, but they trailed 13–10 in the fourth quarter. Duck quarterback Danny O'Neil took the Ducks on a 70-yard drive that culminated in a 19-yard pass to Dino Philyaw to give them the 17–13 win and their first Rose Bowl in 37 years.[4]

1998: Oregon State prevails in double overtime (the first ever overtime Civil War), 44-41. Beaver fans rushed the field after the first overtime after the Ducks failed to score on fourth down, but a pass interference penalty gave the Ducks another chance. It took officials 15 minutes to clear the field, after which the Ducks scored to send the game to a second overtime. The Ducks managed a field goal in their possession, but Beavers running back Ken Simonton scores to give the Beavers an upset win, their fifth win of the season, and their best record since 1971.[1][4]

2000: Oregon came into the game ranked #5 in the country with Oregon State at #8, the only time both teams have been ranked in the top 10. With a win, Oregon would go to the Rose Bowl; the Beavers needed a win to force a tie between the two teams, and keep alive hopes of going to the Rose Bowl. Oregon State won the game 23-13, but was denied a Rose Bowl bid when the University of Washington beat Washington State later the same day. Oregon State was extended an at-large invitation to BCS' Fiesta Bowl.[4]

2001: Oregon came into the game needing only a victory over their arch-rival for the team's first outright Pacific-10 Conference championship since 1994 and a trip to the Fiesta Bowl; the Beavers needed a win to secure a winning season. After OSU initially took a 6-3 lead into halftime, Oregon rallied behind a Keenan Howry punt return for a touchdown to give the Ducks a lead they would not relinquish, amidst a driving rainstorm. Final score: Ducks 17, Beavers 14.[4]

2007: Oregon State wins 38–31 in double overtime at Autzen, the first road team to win the game in 10 attempts. The game featured a blocked Oregon State field goal with 1:01 remaining, followed by a missed Oregon field goal as regulation expired.

2008: Oregon State needed a victory to get a bid to the 2009 Rose Bowl, their first Rose Bowl in 44 years. Instead, Oregon ran away with a 65–38 blowout, setting Civil War records for the most points scored by one team and the most total points scored.

2010: Oregon, coming into the game second in the Bowl Championship Series (BCS) standings, needed to win the game to secure a spot in the BCS championship game. Oregon State, at 5-6, needed a win to become bowl eligible. With ESPN's College GameDay staged in Corvallis for the first time, the Ducks win 37-20 to secure a spot against Auburn in the 2011 BCS National Championship Game.

1910: following a 12-0 Oregon victory in Corvallis, fans of both teams began a verbal argument that escalated into exceedingly rowdy behavior as Ducks fans returned to the train station to leave. The UO's public relations department spread stories of (then) Oregon Agricultural College hooliganism to the statewide press, offending students of OAC and causing the rivalry to be suspended for 1911.[7]

1937: After defeating Oregon 14-0 in Corvallis, Oregon State fans had a large rally the next evening that lasted for six hours. Approximately 2,000 Oregon State students decided to caravan the following day to Eugene and have another celebration. State police initially halted the group, then agreed to lead them through the town if they agreed to behave. However, once Oregon students got out of class, the situation escalated with Ducks pelting Beavers with tomatoes and water balloons, some Oregon State students were thrown into the millrace, and other OSU students taken to Skinner Butte, stripped and forced to repaint the "O" hillside letter yellow and slide down the painted surface.[7]

1954: 50-60 UO students infiltrated Corvallis and lit the traditional OSU homecoming bonfire early. While it had been done before, this time OSU students were able to capture 25 UO students and hold them "prisoner".[8] The captured students had their heads shaved, were painted orange and black and some were forced to do menial labor for OSU fraternities. One captured Duck was marched through the OSU campus with a sign that said "I'm a dumb Duck."[7] Meanwhile, the UO raiding party kidnapped a single OSU student and paraded him around the UO campus.[8]

1960: a UO student abducted the OSU homecoming queen from the front of her home in Corvallis. She was returned unharmed thirty minutes later, but before that the OSU student body president received a ransom note demanding he ride a child's scooter to the center of Eugene and make a public appeal for her return.

1972: After a 30-3 UO victory at Corvallis, Ducks fans stormed the OSU field to take down goal posts; after taking down the south goalposts, Beavers fans attempted to defend the north goalposts, resulting in a large brawl.[7]

2008: With just a few minutes left in the first half, and Oregon having scored twice in a matter of minutes, an Oregon State student threw cans of white paint at the Oregon Marching Band while they waited to take the field for halftime, causing thousands of dollars in damage to the band's uniforms.

2010: After a 37–20 victory which sent the Ducks to the BCS championship, a group of Duck fans lit on fire a T-shirt saying "I hate your Ducks" over the Beavers logo on the field. The resulting fire caused significant damage to the artificial turf. Police used a photo of the incident from the Portland Tribune to arrest a University of Oregon student and charge him with riot and several misdemeanors.[9] 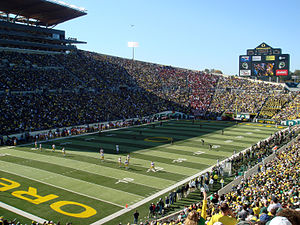 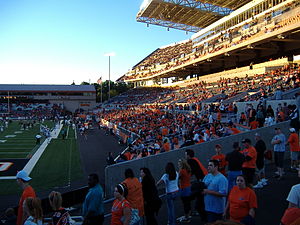