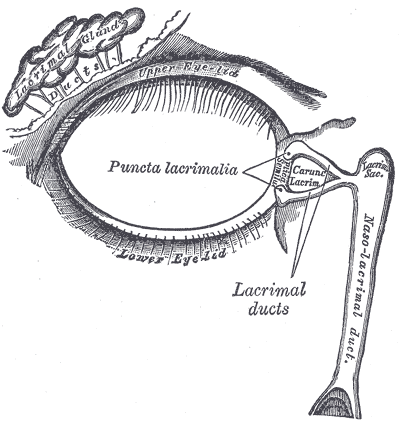 Caption = Lacrimal apparatus of the right eye. The lacrimal gland is to the upper left. The right side of the picture is towards the nose.

a =
b = superior
c = superior lacrimal canal
d =
e = inferior
f = inferior lacrimal canal
g =
Precursor =
System =
Artery =
Vein =
Nerve = ,
Lymph =
MeshName =
MeshNumber =
DorlandsPre = g_06
DorlandsSuf = 12392431
The lacrimal glands are paired almond-shaped , one for each eye, that secrete the aqueous layer of the tear film. They are situated in the upper, outer portion of each orbit.

Each lacrimal gland is divided into orbital and portions by the of the , the portions are continuous with each other.

The orbital portion contains fine s that unite to form 3 - 5 main excretory ducts, joining 5 - 7 ducts in the palpebral portion before the secreted fluid may enter on the surface of the eye. Tears secreted collect in the conjunctiva of the upper lid, and pass over the eye surface to the lacrimal puncta. [ "eye, human."Encyclopædia Britannica. 2008. Encyclopædia Britannica 2006 Ultimate Reference Suite DVD 5 Apr. 2008 ]

The lacrimal gland is a compound , it is made up of many separated by , each lobule contains many . The acini contain only serous cells and produce a watery serous secretion.

Each acinus consists of a grape-like mass of "lacrimal gland cells" with their apices pointed to a central lumen.

The central lumen of many of the units united to form , and then unite to from . The gland lacks .

The "sensory innervation" to the lacrimal gland is from the of the .

The " nerve supply" originates from the of the in the . Just distal to the , the facial nerve gives off the . This nerve carries the parasympathetic secretomotor fibers through the to the . Here the fibers synapse and postganglionic fibers join the fibers of the Maxillary Nerve, which travels through the . Once it has traversed this opening, the parasympathetic secretomotor fibers branch off with the zygomatic nerve and then branch off again, joining with the lacrimal branch of the ophthalmic division of CN V, which innervates the lacrimal gland.

The , derived from the supplies the lacrimal gland. Venous blood returns via the .