Faro, Pharaoh, or Farobank, is a late 17th century French gambling card game descendant of basset, and belongs to the lansquenet and Monte Bank family of games, in that it is played between a banker and several players winning or losing according to the cards turned up matching those already exposed or not.

Although not a direct relative of poker, faro was played by the masses alongside its other popular counterpart, due to its fast action, easy-to-learn rules, and better odds than most games of chance. The game of faro is played with only one deck of cards and allows for any number of players, usually referred to as "punters".

The earliest references to a card game named pharaon are found in Southwestern France in the late 17th century (1688) during the reign of Louis XIV.

Pharaoh and basset, the most popular card games of 18th and 19th century Europe, were forbidden in France during the reign of Louis XIV on severe penalties, but these games continued to be widely played in England during the 18th century. Pharo, the English alternate spelling of Pharaoh,[1] was easy to learn, quick and, when played honestly, the odds for a player were the best of all gambling games, as records Gilly Williams in a letter to George Selwyn in 1752.[2]

With its name shortened to faro, it soon spread to the United States in the 19th century to become the most widespread and popularly favored gambling game. Also called "Bucking the Tiger", which comes from early card backs that featured a drawing of a Bengal Tiger, it was played in almost every gambling hall in the Old West from 1825 to 1915.[3]

Faro's detractors regarded it as a dangerous scam that destroyed families and reduced men to poverty because of rampant rigging of the dealing box. Crooked faro equipment was so popular that many sporting-house companies began to supply gaffed dealing boxes specially designed so that the bankers could cheat their players. Cheating was prevalent enough that editions of Hoyle’s Rules of Games began their faro section warning readers that not a single honest faro bank could be found in the United States. While the game became scarce after World War II, it continued to be played at a few Las Vegas and Reno casinos through 1985.

Historians have suggested that the name Pharaon comes from Louis XIV's royal gamblers who called the game pharaon because of the motif that commonly adorned one of the French-made court cards.[1] Another idea traces the name to the Irish word fairadh, pronounced "fearoo", meaning "to turn". It could have been brought to England and France through the mass emigration from Ireland, in particular in the aftermath of the Flight of the Wild Geese. Also the Irish Brigade served in France and may have brought the term with them. 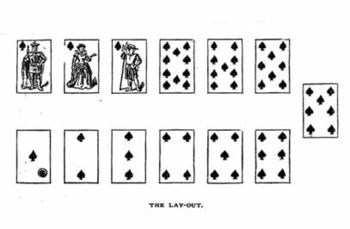 The layout of a faro board.

A game of faro was often called a "faro bank". It was played with an entire deck of playing cards. One person was designated a "banker" and an indeterminate number of players could be admitted. Chips (called "checks") were purchased by the punter from the banker (or house) from which the game originated. Bet values and limits were set by the house. Usual check values were 50 cents to $10 each.

The faro table was oval,[4] covered with green baize, and had a cutout for the banker. A board with a standardized betting layout consisting of one card of each denomination pasted to it, called the "layout", was placed on top of the table. Traditionally, the suit of spades was used for the layout. Each player laid his stake on one of the 13 cards on the layout. Players could place multiple bets and could bet on multiple cards simultaneously by placing their bet between cards or on specific card edges. Players also had the choice of betting on the “high card” bar located at the top of the layout.

Certain advantages were reserved to the banker: if he drew a doublet, that is, two equal cards, he won half of the stakes upon the card which equaled the doublet. In a fair game, this provided the only "house edge". If the banker drew the last card of the pack, he was exempt from doubling the stakes deposited on that card. In most cases, when three cards remained, the dealer would offer a specialized bet called "calling the turn", with the house paying to the players who can identify the exact order of the last three cards a 4-to-1 (since the real odds of naming the order is 5 to 1) payout and a 1-1 payout if there is a pair, called a "cat-hop". [5]

By 1870, the words used in the game were a mixture of French and English words and spellings.