David Chang
Not to be confused with David Chiang. 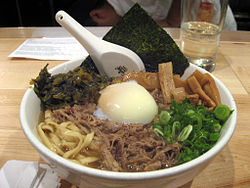 In 2003, Chang opened his first restaurant, Momofuku Noodle Bar in the East Village.[3] Chang's website states momofuku means 'lucky peach' [4] (Japanese: 桃福), but it is likely a reference to Momofuku Ando[5]—the inventor of instant noodles.[6] In August 2006, Chang's second restaurant, Momofuku Ssäm Bar, opened a few blocks away.[7][8] In March 2008, Chang opened Momofuku Ko, a 12 seat restaurant that takes reservations six[9] days in advance, online only, on a first-come-first-served basis. The highly limited seating, along with Chang's popularity in New York, has caused a furor, generating frustration for both influential and ordinary people who have failed to secure a reservation.[10]

In November 2008, Chang expanded Momofuku Ssäm Bar into an adjacent space, which he named Momofuku Bakery & Milk Bar, serving soft serve, along with cookies, pies, cakes and other treats.[11][12] In May 2009 it was reported that Momofuku Bakery & Milk Bar's Crack Pie, Cereal Milk, and Compost Cookies are in the process of being trademarked.[13] In April 2011, Milk Bar moved across the street from Ssäm Bar on 13th Street, and Ssäm Bar now uses the space as a bar at night and a lunch counter with a duck-focused menu during the day.

In May 2010, Chang opened Ma Peche in midtown Manhattan.[14] There is a location of Milk Bar there as well.

He appeared in the fifth episode of Season One of HBO's Treme alongside fellow chefs Tom Colicchio, Eric Ripert and Wylie Dufresne. His presence on the show has expanded in the second season, as one of the characters, a chef who has moved to New York city, takes a job in his restaurant.[15]

In November 2010, Chang announced the opening of his first restaurant outside the US in Sydney, Australia. He is to open Momofuku Seiōbo at the redeveloped Star City Casino in Southern-hemisphere. In an article with the Sydney Morning Herald, Chang was quoted as saying: 'I've just fallen in love with Australia. I'm just fascinated by the food scene in Sydney and Melbourne. People are excited about food in Australia. It's fresh and it's energetic.'[16] Momofuku Seiōbo opened in late October 2011.[17]

In March 2011, Chang announced that he will bring two new restaurants to Toronto, sometime in early 2012.[18]

Noted for his "bad-boy attitude (no reservations, no vegetarian options)",[19] Chang created a controversy in 2009 by making dismissive remarks about California chefs, telling Anthony Bourdain "They don’t manipulate food, they just put figs on a plate.”[20] He was also listed on the 2010 list of the Time 100 Most Influential People.[21]

Chang has served as a guest judge on Top Chef: All Stars.[22]

In 2011 he was a guest judge on Masterchef Australia.