Northwest Missouri State University is a state university in Maryville, Missouri. Founded in 1905 as a teachers college, it offers both undergraduate and graduate programs. The campus, based on the design for Forest Park at the 1904 St. Louis World's Fair, is the official Missouri State Arboretum.[2] The school is governed by a state-appointed Board of Regents and headed by President Dr. John Jasinski.

In 1905 the Missouri Legislature created five districts in the state to establish teaching standards or norms (hence the original name Normal school) in a state teacher college network.

Maryville won the competition for the Northwest district with an offer to donate 86 acres (34.8 ha) (on coincidentally the northwest corner of town) and $58,000 on the site of a Methodist Seminary. The other districts in the network were to be at Kirksville (Northeast - now Truman State), Cape Girardeau (Southeast), Springfield (Southwest - now Missouri State), and Warrensburg (Central - now Central Missouri).

The original mission of the school was to teach elementary school teachers. Classes began on June 13, 1906 with a lab school teaching Maryville's children (that was eventually named the Horace Mann school) in kindergarten through third grade. The school was later expanded to a full-fledged high school before dropping back to its current configuration of kindergarten through sixth grade. 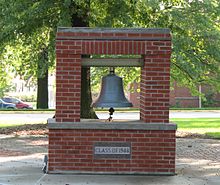 During World War II, Northwest Missouri State University was one of 131 colleges and universities nationally that took part in the V-12 Navy College Training Program which offered students a path to a Navy commission.[4]

In 1969, Missouri Governor Warren Hearnes pushed for switching St. Joseph Junior College from a two-year school into a four-year state college. At approximately the same time, authorities decided against a plan to continue routing Interstate 29 north of St. Joseph along U.S. Route 71 through Maryville and Clarinda, Iowa, instead picking a route to Council Bluffs, Iowa/Omaha, Nebraska along the sparsely populated Missouri River bottoms.

Opening a new four-year state school within 45 miles (72 km) of Maryville (along with a delay in widening U.S. Route 71 to Maryville) was perceived[who?] in Maryville as an attempt to kill the school and the town with which it is intertwined. Those fears came to the forefront in 1988 when Shalia Aery, commissioner of higher education under Governor John Ashcroft announced a plan to close the school,[citation needed] a plan that was ultimately withdrawn.

On August 14, 1972, Northwest was elevated to university status so that it could offer masters degrees. Its name changed to Northwest Missouri State University. 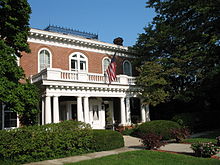 The President's home is the Thomas Gaunt House, which is on the National Register of Historic Places.

In 1987, Northwest unveiled its Electronic Campus Program, the first such program among public U.S. colleges.[6] It put computer terminals in all residence halls, eventually reaching more than 6000 students. The VAX computers were command line driven and included access to programs such as Wordstar.[citation needed] Brit Hume, visiting the college during this period on a speaking engagement, wrote a guest column in the Washington Post proclaiming Northwest as the country's first electronic campus.[citation needed] In 1997, the program was upgraded and all of the faculty members received laptop computers, while network machines were implemented in each residence hall room. Recently, all full-time students were provided a laptop. Many locations on campus are now connected via WiFi.

The Administration Building rises above the Missouri State Arboretum

The campus design was inspired by the Forest Park design for the 1904 St. Louis World's Fair which evolved into the campus for Washington University. In 1993 the state legislature designated Northwest the official Missouri State Arboretum. 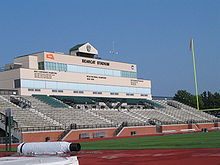 In 2000 Northwest began offering an on-campus course for gifted high school students who spend their junior and senior years of high school living on the campus completing their high school courses as well as two years of college work. Upon graduation, students receive their high school diploma and an associates degree from Northwest. The program is called the Missouri Academy of Science, Mathematics and Computing, with an average enrollment around 80 students that has grown since 2007 by 20 students, and continues to increase.[citation needed] 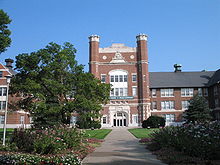 The Collegiate Gothic structure with its central tower keep design evokes Tattershall Castle and lords over the campus with the motto, "And the truth shall make you free," engraved in stone. Because of this design, the term "Tower" is used frequently throughout campus and is the name of the school yearbook. Work on the building began in 1906 and continued on and off until classes began in it on October 3, 1910. The architect of record for the Maryville building is John H. Felt. On March 15, 1919, a tornado ripped the roof off its auditorium and blew out most of its windows.

On July 24, 1979, a fire destroyed 60 percent of the building on the central and west wing as well as the north wing housing the auditorium and Little Theater. Many thought the building was going to be razed, However the east wing survived with relatively little damage.

A $13.8 million capital program repaired most of the building and made extensive changes to the campus layout. The building ceased to serve as classroom space, with the exception of 3rd floor, which houses the Family and Consumer Sciences Department. The theater and music departments moved out of the building to what is now the Ron Houston Center for the Performing Arts, located southeast of Bearcat Stadium. The north wing of the Administration Building was torn down and sealed, although the outline of the wing is still visible against the bricks on the north. The former Wells Library (now Wells Hall) was turned into a classroom area and home for the National Public Radio affiliate radio station KXCV-FM and the library was moved to its current location in the new B.D. Owens Library. All the academic files were burned and lost with no backups prior to the fire. 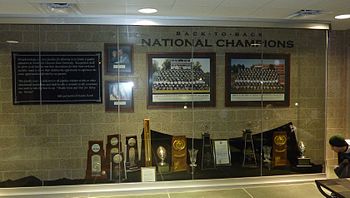 Northwest was a founding member of the Mid-America Intercollegiate Athletic Association in 1912 and has remained in the conference ever since. From its founding until 1937 it competed in the Amateur Athletic Union. From 1937 to 1957 it competed in the National Association of Intercollegiate Athletics. In 1957 it joined NCAA Division II. Northwest has appeared in seven Division II football title games (winning three) since 1998. The men's basketball team appeared in an AAU title game in 1930.

Student organizations encompass activities and interests that include Academic (such as an Association for Computing Machinery chapter),[7] Greek fraternities and sororities, Political (such as the College Republicans or the Young Democrats),[8] Honorary (such as the Blue Key Honor Society and Mortar Board),[9] Multicultural (with groups such as the Alliance of Black Collegians, the Asian Student Association, the Hispanic American Leadership Organization, and the Indian Student Association),[10] Performing (such as the American Choral Directors Association),[11] Religious (such as Campus Crusade for Christ),[12] Residential Life (with student governing bodies for the residential halls),[13] Sports (with clubs for cheerleading, fencing, rugby, soccer, wrestling and equestrian sports),[14] and dozens more.[15] 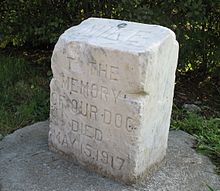 Memorial to Mike the Dog, near the administration building. 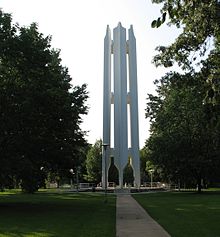 Cover of the Spring 2006 issue of Northwest Alumni magazine, with an aerial view of the campus.

Among Northwest's alumni are Jean Bartik, one of the original programmers for the ENIAC computer and a member of the Women in Technology International Hall of Fame.

Professional athletes and sports figures include: