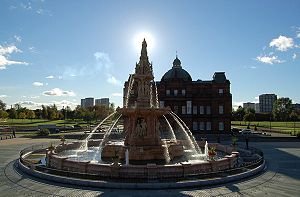 Glasgow Green is a park situated in the east end of Glasgow on the north bank of the River Clyde. It is the oldest park in the city dating back to the 15th century.

In 1450, King James II granted the land to Bishop William Turnbull and the people of Glasgow.[1] The Green was quite different from what it is today, being an uneven swampy area composed of a number of "greens" (divided by the Camlachie Burn and Molendinar Burn), including the High and Low Greens, the Calton Green and the Gallowgate Green.[2] The park served a number of purposes in its first few centuries; as a grazing area, an area to wash and bleach linen, an area to dry fishing nets and for activities like swimming. The city's first steamie, called The Washhouse, opened on the banks of the Camlachie Burn in 1732.

An area of land, known as Fleshers' Haugh was purchased in 1792 by the city from Patrick Bell of Cowcaddens, extending the park to the east.[3]

In 1817 and 1826, efforts were made to improve the layout of the park. Culverts were built over the Calmachie and Molendinar Burns and the park was levelled out and drained.[1]

In its time a number of projects have been suggested that would have intruded upon the Green. The steamship owner Henry Bell proposed building a canal from the Broomielaw to Glasgow Green with a quay terminal at the Green, this proposal was publicly condemned and never implemented. Large coal deposits were discovered under the Green, after borings performed in 1821-1822 and although the City's Superintendent of Work recommended mining, the town council voted against it. However, later in 1858, when the city was looking to offset the cost of purchasing land for parks in other areas of the city, the council approved a plan to mine the Green. However, before the plan could be implemented, it met with large scale public opposition and was dropped, only for it to be resurrected in 1869 and 1888, each time failing to result in any mining.[1]

Glasgow Green railway station was on the Glasgow Central Railway. It was closed in 1953. 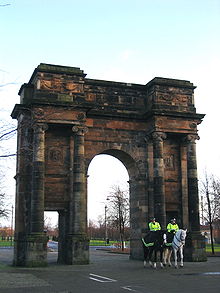 McLennan Arch, found at the north-west entrance to Glasgow Green. 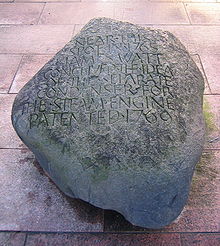 From 25 December 1745 to 3 January 1746, Bonnie Prince Charlie's army camped in the privately owned Flesher's Haugh (which would become a part of Glasgow Green in 1792), while Charlie demanded that the city equip his army with fresh clothing and footwear.[3]

In 1765, James Watt, while wandering aimlessly across the Green, conceived the idea of the separate condenser for the steam engine.[1] This invention is credited by some with starting the Industrial Revolution.

To alleviate economic depression in the aftermath of the Napoleonic Wars the Town Council of Glasgow employed 324 jobless as workers to remodel Glasgow Green. The Radical movement for parliamentary reform grew, and in 1816 some 40,000 people attended a meeting on the Green to support demands for more representative government and an end to the Corn Laws which kept food prices high. In the spring of 1820 the Green was one of the meeting places for conspirators in what became the "Radical War", with strikers carrying out military drill on the Green before their brief rebellion was crushed. Later James Wilson was convicted of treason for allegedly being a leader of the insurrection, and hanged and beheaded on Glasgow Green in front of a crowd of some 20,000 people.

When the Reform Act of 1832 passed in Parliament, increasing the electorate from 4,329 (1820) to 65,000 (1832), a large demonstration of over 70,000 people was held on the Green with a procession lead around the park by a Bridgeton band. The Chartism movement that grew in response to the Reform Act, later resulted in what is known as the Chartist Riot of 1848. William Ewart Gladstone's Reform Act of 1867, which increased the electorate to 230,606 (1868), brought further meetings to the Green.[1]

One of Scotland's oldest sporting clubs Clydesdale Amateur Rowing Club, (Inst 1857) moved from the south side of the river to Glasgow Green in 1901. In 1872 a group of members from this club formed a team to play football against Callander F.C. on Flesher's Haugh, this team became Rangers F.C..[3]

During World War I, the anti-war movement held mass demonstrations on the Green. In September 1914, John Maclean held his first anti-war rally under Nelson's monument. The Military Service Act of 1916, led to a rally on the Green, which resulted in 12 months imprisonment for the three lead speakers under the DORA Act. On 29 June 1916, David Lloyd George was invited to receive the freedom of the city, which led to mass protests on the Green. In May 1917, workers marched through Glasgow to the Green in support of Russia's February Revolution. Another result of World War I, was increased migration to the city of munitions workers. The resulting rent increases led to protests on the Green in 1920.

Over the years there have been many live music events on Glasgow green. Michael Jackson performed there, in 1992 on his Dangerous World Tour his only live show in Scotland. The Stone Roses played their last Scottish show on the green in 1990. The green was also host to Download Festival Scotland in 2004 a live music festival featuring Metallica, Linkin Park, Korn and Slipknot. 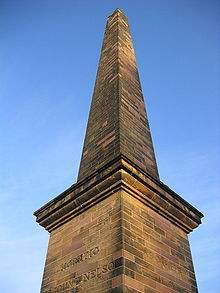 In 1806, the year after Admiral Horatio Nelson's death, a 43.5 metre tall monument was erected in the Green. The first civic monument in Britain to commemorate Nelson's victories, it predated Nelson's Pillar in Dublin by two years and Nelson's column in London by three decades. Four years after its construction it was hit by a lightning strike which caused the top 6 metres to collapse, but the damage was soon repaired.[1] In 2002 a £900,000 restoration programme restored the monument to its original condition, repaired damage that had accumulated over the last two centuries and installed floodlighting. 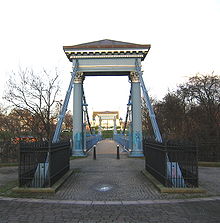 St. Andrew's Suspension Bridge, viewed from the Hutchesontown side.

In 1855 the St. Andrew's Suspension Bridge was opened, connecting the park to the north and Hutchesontown to the south, to "replace busy ferry, conveying workers from Bridgeton & Calton to Hutchesontown". The bridge was repaired in 1871 and 1905, with a major refurbishment programme undertaken between 1996 and 1998 partially funded by the European Union. 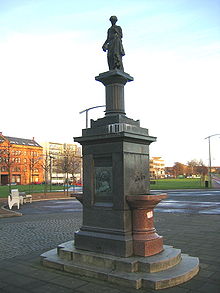 In 1881 a fountain was erected in the park to commemorate Sir William Collins, a figure in the temperance movement who served as Glasgow's Lord Provost between 1877 and 1880.[1] In 1992 the fountain was moved to stand behind the McLennan Arch.

The Doulton Fountain, gifted to Glasgow as part of the International Exhibition of 1888, was moved to the Green in 1890.[1] Designed by architect Arthur E. Pearce, the 48 ft tall fountain was built by the Royal Doulton company to commemorate Queen Victoria's reign. It featured a 70 ft wide basin, with a slightly larger than life-size statue of Queen Victoria, surrounded by four life-size statues of water-carriers representing Australasia, Canada, India and South Africa. A lightning strike in 1891 destroyed the statue of Victoria, and rather than let the city replace the statue with an urn, Doulton paid for a second hand-made statue to be produced. In the 1960s the fountain was allowed to fall into a state of disrepair with the water supply being turned off. However in 2002 a £2 million restoration program was started that restored the fountain to its original condition. As of 2004[update], the fountain has been placed in a new location, in front of the People's Palace.

Opened in 1898 by the Earl of Rosebery, the People's Palace was designed as a cultural centre for the people of the east end. Originally arranged with reading rooms on the ground floor, a museum on the first floor and an art gallery on the second floor, since the 1940s the building has been used as a museum dedicated to the history of Glasgow.

When the Assembly Rooms, designed by James and Robert Adam, were demolished in 1890, the arch that formed the centrepiece of the building was reconstructed and sited at the western end of Monteith Row in 1892 at the expense of James McLennan, it was then moved again in 1922 to the west edge of the Green facing Charlotte Street.[5] In 1991 it was moved again to its present position facing the Old High Court in the Saltmarket. It is now known as "The McLennan Arch".[1]

In 1901, in an effort to maintain the water level of the Clyde as it runs through the Green, Glasgow Corporation built a tidal weir. This also creates the unusual system of two distinct ecosystems existing side by side, with the Clyde on the west side of the weir being saltwater, while it is fresh water on the east side (the park side). Due to its design the weir is now a listed building.

Glasgow Green also has within it cycle route 75, otherwise known as the Clyde walkway, which runs from the City Centre to Strathclyde Park.