Tiffany & Co. (NYSE: TIF) is an American jewelry and silverware company. As part of its branding, the company is strongly associated with its Tiffany Blue     , which is a registered trademark.

Founded by Charles Lewis Tiffany and Teddy Young in New York City in 1837 as a "stationery and fancy goods emporium," the store initially sold a wide variety of stationery items, and operated as Tiffany, Young and Ellis in lower Manhattan. The name was shortened to Tiffany & Co. in 1853 when Charles Tiffany took control, and the firm's emphasis on jewelry was established.[4] Tiffany & Co. has since opened stores in major cities all over the world.

Each year Tiffany & Co. creates a new Vince Lombardi Trophy, the award given to the NFL team that wins the Super Bowl that year.[5]

Tiffany & Co. also made the 2010 World Series Rings for the San Francisco Giants. [6] 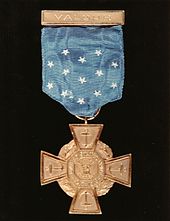 "Tiffany Cross" version of the Medal of Honor

The first Tiffany catalog, known as the "Blue Book", was published in 1845. It is still being published today. In 1862 Tiffany & Co. supplied the Union Army with swords (Model 1840 Cavalry Saber), flags and surgical implements. In 1867 Tiffany & Co. was the first US firm to win an award for the excellence in silverware at the Exposition Universelle in Paris. In 1877, an insignia that would become the famous New York Yankees "NY" logo was struck on a medal of honor by Tiffany & Co. and issued to the first NYC police officer shot in the line of duty. The Yankees adopted the logo in 1909. The company revised the Great Seal of the United States in 1885. In 1919, the company made a revision to the Medal of Honor on behalf of the United States Department of the Navy.[7] This "Tiffany Cross" version was rare because it was awarded only for combat, using the previous design for non-combat awards.[8] In 1942 the Navy established the Tiffany version for non-combat heroism, but it proved unpopular, perhaps due to its resemblance to the German Iron Cross. In August 1942 the Navy eliminated the Tiffany Cross and the two-medal system.[9] In 1968, US First Lady Lady Bird Johnson commissioned Tiffany to design a White House china service, which featured 90 flowers.[10][11] In June 2004, the jeweler Tiffany & Co. sued eBay, claiming that eBay profits from the sale of counterfeit Tiffany products.[12] Tiffany lost at trial and on appeal.[13] See Tiffany v. eBay for more details. On January 28, 2008, it was announced that the Japanese mobile phone operator SoftBank and Tiffany & Co. had collaborated in making a limited 10 model-only cellphone. This cellphone contains more than 400 diamonds, totaling more than 20 carats (4.0 g). The cost is said to be more than 100,000,000 yen (£ 781,824).[14] 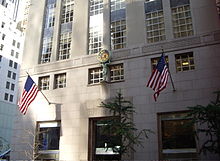 Tiffany's flagship store, since 1940, is located at the corner of Fifth Avenue and 57th Street in Manhattan, New York City. The polished granite exterior is well known for its tiny window displays. The store has been the location for a number of films including Breakfast at Tiffany's, starring Audrey Hepburn, and Sweet Home Alabama, starring Reese Witherspoon. The former Tiffany and Company Building on 38th Street is on the U.S. National Register of Historic Places.

Tiffany & Co. reported in 2006 that its location at South Coast Plaza in Costa Mesa, CA was its most profitable location followed by its New York City flagship, Boston Copley Place, and Ala Moana Shopping Center in Honolulu.

Tiffany & Co. has announced its second store opening in Kuala Lumpur, Malaysia at Pavilion Kuala Lumpur on September 2007, coinciding with the shopping mall opening. The store has 1,700 sq ft (160 m2). retail space and features the same decor elements as its New York flagship. Recently opened stores in the United States include one at The Natick Collection in Natick, MA which opened in September 2007, Mohegan Sun casino in Connecticut, and at the Providence Place mall in Providence, R.I., both opened in November 2007. There is a Tiffany store in Columbus, OH at the Easton Mall. There is a Tiffany store in Terminal 5 at London's Heathrow airport, which opened at the end of March 2008 and a store in the Westfield London shopping centre in Shepherd's Bush.

Tiffany & Co. opened its flagship Irish store, a concession in Brown Thomas on Dublin's Grafton Street in October 2008. It is the biggest of the group's European outlets. In October 2008, Tiffany's opened a store in Madrid, Spain, and brought the Tiffany Diamond to the opening.

On March 8, 2001, Tiffany's launched the first Latin American store in São Paulo, Brazil, located in the Iguatemi São Paulo shopping center.[18] The company opened a second store in the city on October 20, 2003,[19] near the famous Oscar Freire Street. 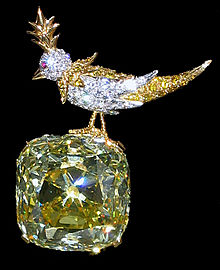 In 2004, Tiffany & Co. created another chain of stores, Iridesse, dedicated to pearl-only jewelry. The company operated 16 stores in Florida, New Jersey, New York, Pennsylvania, California, Illinois, Massachusetts, and Virginia. The chain operated at a loss since its founding, and the company announced in early 2009 that it would discontinue Iridesse due to the economic climate of the time, despite reportedly still believing in the concept.[20]

Tiffany designs were worn by such famous US families as the Astors, the Vanderbilts, Posts, Huttons and the Morgans. Athletes, Hollywood stars, and even European royalty adored these diamonds. Museums valued the Tiffany designs, which ranged from the Art Nouveau period to Art Deco to today's modern styles.[citation needed]

A Tiffany’s gemologist, George Frederick Kunz, was instrumental in the international adoption of the metric carat as a weight standard for gems, and the Tiffany standard for sterling and platinum have been adopted as United States Standards. 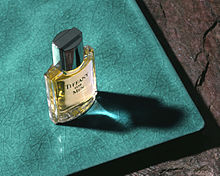 In the late 1980s, Tiffany & Co. ventured into the fragrance business. Tiffany for women was launched in 1987, a floral perfume for women by perfumer Francois Demachy. At $220 per ounce, "Tiffany" was successfully marketed by major department stores across the United States.[21] Two years letter Tiffany for Men was launched in 1989 and developed by perfumer Jacques Polge. The bottle for both the men's and women's fragrance was designed by Pierre Dinand. In 1995, Tiffany launched Trueste perfume for women which was later discontinued. Tiffany continues to produce the core fragrance product for men and the product for women. 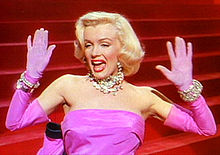 Marilyn Monroe performing "Diamonds Are a Girl's Best Friend", in which Tiffany is mentioned twice (1953) 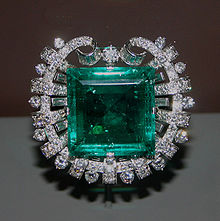