Konstanz (pronounced [ˈkɔnstants], locally [ˈkɔnʃtants]; English: Constance) is a university city with approximately 80,000 inhabitants located at the western end of Lake Constance in the south-west corner of Germany, bordering Switzerland. The city houses the University of Konstanz.

Konstanz is situated on Lake Constance (the Bodensee in German). The Rhine river, which starts in the Swiss Alps, passes through Lake Constance and leaves it, considerably larger, by flowing under a bridge connecting the two parts of the city. North of the river lies the larger part of the city with residential areas, industrial estates, and the University of Konstanz; while south of the river is the old town which houses the administrative centre and shopping facilities in addition to the Hochschule or the University of Applied Sciences. Car ferries provide access across Lake Constance to Meersburg, and the Katamaran provides a shuttle service for pedestrians to Friedrichshafen. To the south, the old town borders onto the Swiss town of Kreuzlingen.

Konstanz is subdivided into 15 wards or districts (Stadtteile). The island of Mainau belongs to the ward of Litzelstetten, a separate municipality until its incorporation into Konstanz on December 1, 1971. 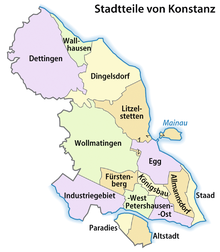 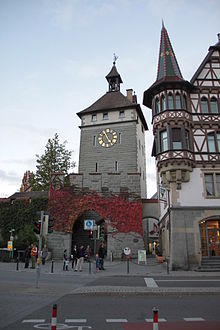 Schnetztor, a section of the former city wall. 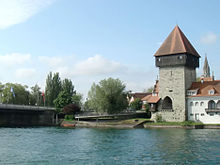 Rheintorturm, a section of the former from city wall.

Konstanz Marktstätte, the main square in the old town. 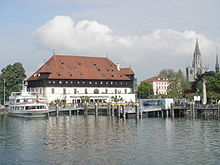 The plaque on the house where Jan Hus stayed in 1414.
See also: Bishopric of Constance

The first traces of civilization in Konstanz date back to the late Stone Age. Around 50 AD, the first Romans settled on the site. Its name, originally Constantia, comes either from the Roman emperor Constantius Chlorus, who fought the Alemanni in the region and fortified the town around 300 AD, or from his grandson Constantius II, who visited the region in 354.

Around 585 the first bishop took up residence in Konstanz and this marked the beginning of the city's importance as a spiritual centre. By the late Middle Ages, about one quarter of Konstanz's 6,000 inhabitants were exempt from taxation on account of clerical rights.

Trade thrived during the Middle Ages; Konstanz owned the only bridge in the region which crossed the Rhine, making it a strategic location. Its linen production had made an international name for the city and it was prosperous. In 1192, Konstanz gained the status of Imperial City so it was henceforth subject only to the Holy Roman Emperor.

In 1414–1418 the Council of Constance took place, during which, on 6 July 1415, Jan Hus (Czech religious thinker, philosopher and reformer), who was seen as a threat to Christianity by the Roman Catholic Church, was burned at the stake. It was here that the Papal Schism was ended and Pope Martin V was elected during the only conclave ever held north of the Alps. Ulrich von Richental's illustrated chronicle of the Council of Constance testifies to all the major happenings during the Council, as well as showing the everyday life of medieval Konstanz. The Konzilgebäude where the conclave was held can still be seen standing by the harbour. Close by stands the Imperia, a statue that was erected in 1993 to commemorate the Council.

The Protestant Reformation took hold in Konstanz in the 1520s, headed by Ambrosius Blarer. Soon the city declared itself officially Protestant, pictures were removed from the churches, and the bishop temporarily moved to Meersburg, a small town across the lake. The city first followed the Tetrapolitan Confession, and then the Augsburg Confession. However, in 1548 Emperor Charles V imposed the Imperial Ban on Konstanz and it had to surrender to Habsburg Austria which had suddenly attacked. Thus Konstanz lost its status as an imperial city. The new Habsburg rulers were eager to re-Catholicise the town and in 1604 a Jesuit College was opened. Its accompanying theatre, built in 1610, is the oldest theatre in Germany still performing regularly.

Because it almost lies within Switzerland, directly adjacent to the Swiss border, Konstanz was not bombed by the Allied Forces during World War II. The city left all its lights on at night, and thus fooled the bombers into thinking it was actually part of Switzerland. After the war, Konstanz was included first in South Baden and then in the new state of Baden-Württemberg.

The Altstadt (Old Town), which is large considering the small size of modern Konstanz, has many old buildings and twisting alleys. The city skyline is dominated by the majestic "Münster" Cathedral ("Münster Unserer Lieben Frau"), several other churches and three towers left over from the city wall, one of which marks the place of the former medieval bridge over the Rhine.

The University of Konstanz was established close to the town in 1966. It houses an excellent library with approximately two million books, all freely accessible 24 hours a day, as well as a botanical garden (the Botanischer Garten der Universität Konstanz).

Konstanz was the birthplace of Count Ferdinand von Zeppelin, constructor of the famous Zeppelin airships. Konstanz also has many famous people living in the town including Frank Lutzenberger.

Konstanz was also home to a large Synagogue, destroyed by the Nazi government in 1938.

Konstanz is twinned with:

Konstanz station is served by the Upper Rhine Railway running west to Singen with connections to all parts of Germany, and the Etzwilen–Konstanz line running south into Switzerland, connecting to major routes at Weinfelden. Services are provided by the Deutsche Bahn AG and also the Swiss Thurbo company and its German subsidiary. The nearest airport is at Friedrichshafen, which can be reached by a fast ferry service on the lake, which also connects Konstanz to other lakeside towns. The airport mainly hosts domestic flights, but flights to Austria and Turkey are available. The nearest international airports are in Stuttgart, in Basel, and Zurich, which has a direct train from Konstanz. Bus services within the city are provided by Stadtwerke Konstanz GmbH.

Additionally Konstanz and Friedrichshafen have been connected by the two (since 2008, three) catamarans Constance and Fridolin since 2005.

It is home to one or more prehistoric pile-dwelling (or stilt house) settlements that are part of the Prehistoric Pile dwellings around the Alps UNESCO World Heritage Site.[2]