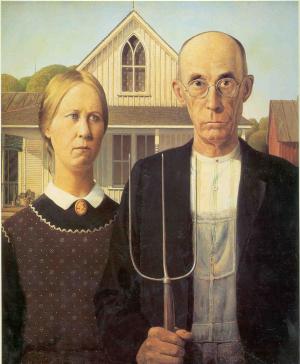 "American Gothic" is a by from 1930. Portraying a -holding farmer and a younger woman (imagined to be his wife or daughter) in front of a house of style, it is one of the most familiar images in 20th century .

Wood wanted to depict the traditional roles of men and women as the man is holding a pitchfork symbolizing hard labor. Wood referenced late 19th century photography and posed his sitters in a manner reminiscent of early American portraiture.

In 1930, Grant Wood, an American painter with European training, noticed a small white house built in architecture in . Wood decided to paint the house along with "the kind of people I fancied should live in that house."

Wood entered the painting in a competition at the . The judges deemed it a "comic valentine," but a museum patron convinced them to award the painting the bronze medal and $300 cash prize. The patron also convinced the Art Institute to buy the painting, where it remains today. The image soon began to be reproduced in newspapers, first by the "" and then in , , Kansas City, and . However, Wood received a backlash when the image finally appeared in the "Cedar Rapids Gazette". Iowans were furious at their depiction as "pinched, grim-faced, puritanical Bible-thumpers". One farmwife threatened to bite Wood's ear off. Wood protested that he had not painted a caricature of Iowans but a depiction of Americans. Nan, apparently embarrassed at being depicted as the wife of someone twice her age, began telling people that the painting was of a man and his daughter, a point on which Wood remained silent.

However, with the onset of the , the painting came to be seen as a depiction of steadfast American pioneer spirit. Wood assisted this transition by renouncing his Bohemian youth in and grouping himself with populist Midwestern painters, such as and Thomas Hart Benton, who revolted against the dominance of East Coast art circles. Wood was quoted in this period as stating, "All the good ideas I've ever had came to me while I was milking a cow."

"American Gothic" is one of the few images to reach the status of cultural icon, along with 's "" and 's "".

Famously "American Gothic" was used in 's "" and is parodied by the two characters Riff Raff () and Magenta () who dress up as the man and the woman while standing in front of a white church. O'Brien's character even carries a pitchfork. Wood's "American Gothic" also hangs on the wall of the hall in the Rocky Horror House later in the film. It also briefly features in Rocky Horror's sequel "" where it is hung in the wardrobe. Additionally, the title sequence to the American television show "" also parodies the "American Gothic" painting.