He was seen as an idealistic, but also polarizing politician. Throughout history, Dutch political leaders have tended to soothing manners - Den Uyl was one of a relatively few exceptions. People either loved him or hated him. Followers of his idealistic policies called him Ome Joop (Uncle Joop). [1] He was criticized for creating a budget deficit and polarizing Dutch politics.[2] Associated with Den Uyl was the maakbare samenleving (the makeable society, the idea that society is constructed and that government is a player in the construction). Another idea associated with Den Uyl was de verbeelding aan de macht (imagination in the driver's seat, the power of conceptual thinking, particularly in politics).[3]

Johannes Marten den Uijl was born on August 9, 1919 Netherlands Province of North Holland. He was born in a Calvinist reformed family. His father, Johannes den Uyl, was a shopkeeper and a basketweaver who died when Den Uyl was only 10. Den Uyl attended the Christian Lyceum in Hilversum from 1931 to 1936. Following this, he studied economics at the University of Amsterdam. During this period in his life he left the church. In 1942 he attained the doctorandus degree. Until 1945 he was a civil servant at the National Bureau for Prices of Chemical Products, part of the Ministry of Economic Affairs. During that period he was part of the underground newspaper group that published the clandestine Het Parool (The Password). After the Second World War he worked for Het Parool, Vrij Nederland, and other former resistance papers. From January 1949 to 1963 he was head of the Wiardi Beckman Stichting, the think tank of the Partij van de Arbeid (Labour Party, a Dutch Social democracy party). In 1953, at the invitation of the American government, Den Uyl stayed for a few months in the United States, gaining an appreciation of the American experience.[4] 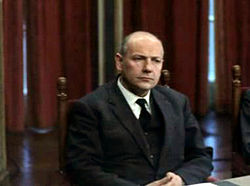 Joop den Uyl as Minister of Economic Affairs in 1965. 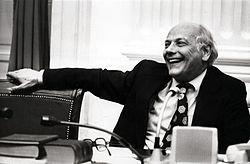 Joop den Uyl as Prime Minister of the Netherlands in 1977. 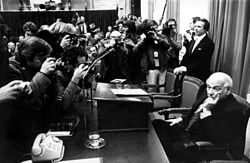 Joop den Uyl after the fall of his Cabinet in 1977. 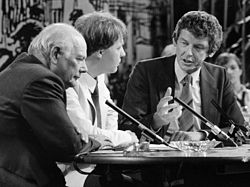 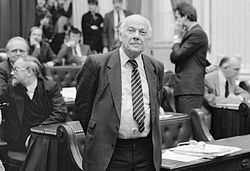 Joop den Uyl as the Parliamentary leader of the Labour Party in the House of Representatives in 1986.

In 1953 Den Uyl was elected to the city council of Amsterdam and in 1956 he was elected to the House of Representatives. In 1963 he became municipal administrator for economic affairs in Amsterdam, resigning his parliamentary seat. He resigned that post in 1965 to become minister of economic affairs in the Cals administration. As the responsible minister, he decided to close the uneconomic coal mines of Limburg, causing high local unemployment. Following the parliamentary elections of 1967, he became leader of the Labour Party in parliament.

Den Uyl's Labour Party won the 1973 elections in alliance with the progressive liberal Democrats 66 and radical Christian Political Party of Radicals, but failed to achieve a majority in parliament. After lengthy negotiations, he formed Kabinet-Den Uyl with the Christian-democratic Catholic People's Party and Anti Revolutionary Party. This cabinet faced many problems. An early problem was the 1973 oil boycot following the Dutch support of Israel in the Yom Kippur war. Den Uyl said in a speech on national television that "things would never return to the way they were" and implemented fuel rationing and a ban on Sunday driving.

Between 1973 and 1977, the country's economic situation turned ugly. The government's budget deficit increased tenfold, inflation approached 10 percent, the unemployment rate doubled, and the current account went from positive to negative – the latter a critical problem in a country that rises or falls on foreign trade. Despite economic difficulties, however, the government was able to enact a wide range of progressive social reforms, such as significant increases in welfare payments and the indexation of benefits and the minimum wage to the cost of living.[5]

In 1977 the cabinet fell due to a conflict between Den Uyl and the Catholic People's Party minister of Justice Dries van Agt. The Labour Party entered the elections under the banner "Vote for the Prime Minister". The Labour Party won by a landslide (it got over 33% percent of the votes, a relatively large share in the divided politics of the Netherlands at that time) and 53 seats. Labour's coalition partner Democrats 66 also made gains, from 6 to 8 seats. However, its other coalition partner Political Party of Radicals lost nearly all its seats, making it impossible for Den Uyl to form a new government that he could count on to support him in parliament. More than 200 days after the election, the Christian Democratic Appeal (a new party that was formed by Den Uyl's former coalition-members Catholic People's Party and Anti Revolutionary Party, joined by the smaller Christian Historical Union) formed a cabinet with the liberal People's Party for Freedom and Democracy, supported by a small majority of 77 seats (out of a total of 150).

After being opposition leader from 1977 to 1981, Den Uyl returned to government in 1981. The Labour Party formed a coalition with Christian Democratic Appeal and Democrats 66. Den Uyl became vice-minister president and minister for Social Affairs and Employment. Van Agt, by now Den Uyl's nemesis, led this cabinet. The cabinet was in constant internal conflict and fell after eight months. The elections of 1982 were won by the People's Party for Freedom and Democracy. Labour Party made few gains, Christian Democratic Appeal suffered light losses and the Democrats 66 lost most of its seats. Den Uyl returned to parliament and led the Labour Party in opposition until 1986. As leader of the main opposition party, Den Uyl - always a soft-spoken Atlanticist - provided cover for the government's controversial decision to place NATO cruise missiles on Dutch soil. In turn, this decision — and a similar one by the Belgian government — satisfied one of the West German conditions for the placement of cruise missiles and Pershing II missiles in West Germany.

Den Uyl was married to Liesbeth den Uyl. They had 3 sons and 4 daughters. Of those Saskia Noorman-den Uyl became a member of parliament for the Labour Party until 2006 and Xander den Uyl became a leading figure in ABVAKABO, one of the Dutch Labour unions.

After the elections of 1986, which he won, Den Uyl left politics. He was succeeded as leader of the Labour Party by Wim Kok. He died on Christmas Eve of 1987, aged 68, of a brain tumor.

"Twee dingen:..." ("Two things:..." In interviews, many of Den Uyl's answers started with these two words, sending a signal to the listener to drop any expectation of a simple yes or no.)