Nabucco (short for Nabucodonosor, English Nebuchadnezzar) is an opera in four acts by Giuseppe Verdi to an Italian libretto by Temistocle Solera, based on the Biblical story and the 1836 play by Auguste Anicet-Bourgeois and Francis Cornue. It is Verdi’s third opera and the one which is considered to have permanently established his reputation as a composer.

Nabucco follows the plight of the Jews as they are assaulted, conquered, and subsequently exiled from their homeland by the Babylonian King Nabucco (in English, Nebuchadnezzar). The historical events are used as background for a romantic and political plot.

Its first performance took place on 9 March 1842 at the Teatro alla Scala, Milan under the original name of Nabucodonosor. The definitive name of Nabucco for the opera (and its protagonist) was first used at a performance at the San Giacomo Theatre of Corfu in September, 1844.[1] Nonetheless, a more plausible alternative for the establishment of this abbreviated form claims that it was the result of a revival of the opera in Teatro Giglio of Lucca.[2] 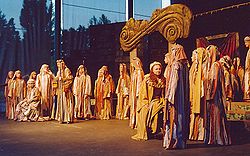 A performance of Nabucco in Eberswalde by the Silesian National Opera, August 2004

The best-known number from the opera is the "Chorus of the Hebrew Slaves," Va, pensiero, sull'ali dorate / "Fly, thought, on golden wings," a chorus which is regularly given an encore when performed today, but until mid-2008, aside from encores during La fille du regiment, it is the only encore the Metropolitan Opera has ever allowed.[citation needed]

The soprano role of Abigaille has been perceived as the downfall of a number of singers. Elena Souliotis and Anita Cerquetti sang it before they were ready and its high tessitura arguably damaged their voices.[citation needed] Certainly, their careers were not long ones. Maria Callas sang it only three times; only a live performance from 1949 was recorded. [It is interesting to hear that in this recording 'Va pensiero' was interrupted by much shouting but the chorus carried on. When it was repeated the audience was silent and then at the end they showed enthusiastic applause. ] Leontyne Price and Dame Joan Sutherland refused to sing it. Marisa Galvany, Ghena Dimitrova, Dunja Vejzovic, Hilda Holzl, and Jadranka Jovanovic were recent exponents of the role.

Although not as frequently performed as some of Verdi's other operas, Nabucco is still heard around the world today. It has been on the Metropolitan Opera's roster since it was first presented there during the 1960/61 season. It is the only early Verdi opera, apart from Ernani and Luisa Miller, which has received regular performances at the Met in recent times, having been presented in 2001, 2003, 2004, and 2005.[3] Nabucco is also regularly performed at the Arena di Verona, where it was presented in 2002, 2003, 2005, 2007, and 2008.[4] Amongst the performances preserved on DVD are those at the Arena di Verona (1981 and 2007); La Scala (1987), Opera Australia (1996), Vienna State Opera (2001), Metropolitan Opera (2002), Genoa's Teatro Carlo Felice (2004), Teatro Municipale di Piacenza (2004), and Austria's St. Margarethen Opera Festival (2007).[5] Many other companies have also performed it, including San Francisco Opera in 1982, Sarasota Opera in 1995, London's Royal Opera House in 1996, the New National Theatre Tokyo in 1998, Teatro Colón in 2000, Baltimore Opera in 2006, and the Teatro Regio di Parma in 2008 as part of their on-going "Festival Verdi" [6] Nabucco is being performed by the Michigan Opera Theatre and the San Diego Opera as part of their 2009-2010 seasons. The Israeli Opera is celebrating its 25th anniversary in 2010 with Nabucco at Masada. The Washington National Opera will perform Nabucco during the spring portion of the 2011/2012 season.

Verdi commented that "this is the opera with which my artistic career really begins. And though I had many difficulties to fight against, it is certain that Nabucco was born under a lucky star."[7] The opera was an instant success, dominating Donizetti's and Giovanni Pacini's operas playing nearby. While the public went mad with enthusiasm, the critics tempered their approval of the opera.

One critic who found Nabucco revolting was Otto Nicolai, the composer to whom the libretto was first offered. A Prussian-bred man, Nicolai felt at odds with emotional Italian opera while he lived near Milan. After refusing to accept the libretto proposal from Merelli, Nicolai began work on another offer called Il Proscritto. Its disastrous premiere in March 1841 forced Nicolai to cancel his contract with Merelli and return to Vienna. From there he learned of the success of Nabucco and was enraged. "Verdi's operas are really horrible," he wrote. "He scores like a fool — technically he is not even professional — and he must have the heart of a donkey and in my view he is a pitiful, despicable composer ..." Additionally, he described Nabucco as nothing but "rage, invective, bloodshed and murder."[citation needed]

Nicolai's opinions were in the minority, however, and he has today become comparatively obscure. Nabucco secured Verdi's success until his retirement from the theatre, twenty-nine operas (including some revised and updated versions) later.

Music historians have long perpetuated a powerful myth about the famous Va, pensiero chorus sung in the third act by the Hebrew slaves. Scholars have long believed the audience, responding with nationalistic fervor to the slaves' powerful hymn of longing for their homeland, demanded an encore of the piece. As encores were expressly forbidden by the government at the time, such a gesture would have been extremely significant. However, recent scholarship puts this and the corresponding myth of Va, pensiero as the national anthem of the Risorgimento to rest. Although the audience did indeed demand an encore, it was not for "Va, pensiero" but rather for the hymn "Immenso Jehova," sung by the Hebrew slaves to thank God for saving His people. In light of these new revelations, Verdi's position as the musical figurehead of the Risorgimento has been correspondingly downplayed.[8][9] At Verdi's funeral, the crowds in the streets spontaneously broke into "Va, pensiero".[10]

Time: 587 BC
Place: Jerusalem and Babylon

'Thus saith the Lord, Behold, I shall deliver this city into the hand of the King of Babylon, and he will burn it with fire' (Jeremiah 21:10)

Interior of the Temple of Jerusalem

The Jews are being defeated and Nabucco (Nebuchadnezzar) is poised to enter Jerusalem. The High Priest Zaccaria tells the people not to despair but to trust in God: D'Egitto là su i lidi / "On the shores of Egypt He saved the life of Moses". The presence of a hostage, Fenena, younger daughter of Nabucco, may yet secure peace (Aria: Come notte a sol fulgente / "Like darkness before the sun, like dust before the wind"). Zaccaria entrusts Fenena's safety to Ismaele, nephew of the King of Jerusalem and a former envoy to Babylon. Although Fenena and Ismaele love each other, when they are left alone, Ismaele urges her to escape rather than risk her life. Nabucco's elder daughter, Abigaille, storms into the temple with soldiers in disguise. She, too, loves Ismaele. Discovering the lovers, she threatens Ismaele: if he does not give up Fenena, Abigaille will accuse her of treason. The King himself enters (Viva Nabucco / "Long live Nabucco"). Zaccaria defies him, threatening to kill Fenena with a dagger. Ismaele intervenes to save her. Nabucco responds by ordering the destruction of the temple, and the Jews curse Ismaele as a traitor.

'Behold, the whirlwind of the Lord goeth forth, it shall fall upon the head of the wicked' (Jeremiah 30:23)

Scene 1: The Palace in Babylon

Nabucco is away at the wars and has appointed Fenena as regent. Abigaille has discovered a document that proves she is not Nabucco's real daughter, but a slave (Aria: Anch'io dischiuso un giorno / "I too once opened my heart to happiness"). The High Priest of Baal, accompanied by the Magi, comes to tell Abigaille that Fenena has released the Jewish captives. Their response is to launch a coup to put Abigaille on the throne, while spreading a rumour that Nabucco has died in battle, and they leave Abigaille to sing the cabaletta: Salgo già del trono aurato / "I am ready to ascend the bloodstained seat of the golden throne").

Scene 2: A hall in the Palace in Babylon

Accompanied by a cello sextet, Zacharia awaits Fenena (Vieni, o Levita / "Bring the tables of the law"). She converts to the Jewish religion, and Ismaele is reconciled to the Jews. However, it is announced that the King is dead and Abigaille and the High Priest of Baal demand the crown from Fenena. Unexpectedly, Nabucco himself enters, scorning both sides, both Baal and the Hebrew god that he has defeated. He declares himself God. When Zaccaria objects, Nabucco orders the Jews to be put to death. Fenena says that she will share their fate. Repeating that he is now god: Non son piu re, son dio / "I am no King! I am God!"), Nabucco is promptly hit by a thunderbolt and loses his senses. The crown falls and is picked up by Abigaille.

Scene 1: The Hanging Gardens of Babylon

The High Priest of Baal presents Abigaille with the death decree for the Jews and Fenena. Nabucco enters looking like a mad man, claiming his throne. Abigaille persuades him to seal the decree, but he asks that Fenena be saved. He tells Abigaille that she is not his true daughter but a slave. Abigaille mocks him, destroying the document with the evidence of her true origins. Understanding that he is now a prisoner, he pleads for Fenena's life. (Duet: Oh di qual onta aggravasi questo mio crin canuto / "Oh what affront I must suffer in my old age"). Abigaille exults.

Scene 2: Banks of the River Euphrates

The Jews long for their homeland: Va pensiero, sull'ali dorate / "Fly thought on golden wings; Fly and settle on the slopes and hills"). Zaccaria once again exhorts them to have faith: God will destroy Babylon.

'Bel is confounded, Merodach is broken pieces; her idols are confounded, her images are broken in pieces.' (Jeremiah 50:2)

Scene 1: The Palace in Babylon
Nabucco awakens, his strength and his reason fully regained. He sees Fenena in chains being taken to her death. Asking forgiveness of the God of the Jews, he promises to rebuild the temple in Jerusalem, and follow the true faith (Dio di Giuda / "God of Judah! The altar, your sacred Temple, shall rise again"). Joined by loyal soldiers, he resolves to punish the traitors and rescue Fenena.

Scene 2: The Hanging Gardens of Babylon
As Zaccaria leads Fenena and the Jews towards death (Va! La palma del martirio......dischius'è il firmamento / "Go, maid, go and conquer the palm of martyrdom"...."Oh, heaven has opened up! My soul yearns for the Lord") on the sacrificial altar of Baal, Nabucco rushes in, sword in hand. At his word the Idol of Baal shatters into pieces. Nabucco tells the Jews they are free and a new Temple will be raised to their God. Abigaille enters. She has poisoned herself. She expresses her remorse, asks the forgiveness of Fenena and dies. Zaccaria acclaims Nabucco as the servant of God and the King of Kings.