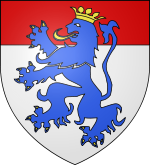 The first known holder of the title was Bouchard Ratepilate. The county passed by marriage to various houses, coming in 1372 to a junior branch of the House of Bourbon. In 1514, Vendôme was made a duchy-peerage. In 1589, the then-Duke of Vendôme came to the throne as Henry IV of France, and the title passed into the royal domain.

It was re-granted to his illegitimate son César in 1598, and held by his descendants until the extinction of the true male line in 1727. 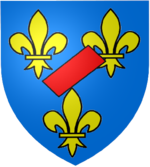 The arms of the illegitimate Bourbon-Vendôme house

The Vendômois was annexed to the royal domain by Louis XIV of France in 1712, on the pretext that Philip's membership in the Order of Malta as grand prior ot France prevented him from holding them, but he retained the title.

The title was revived by Orleanists claimants to the throne of France as a courtesy title. However it is invalid in French law.