Bromochloromethane or methylene bromochloride and Halon 1011 is a mixed halomethane. It is a heavy low-viscosity liquid with refractive index 1.4808.

It was invented for use in fire extinguishers by the Germans during the mid-40s, in an attempt to create a less-toxic, more effective alternative to carbon tetrachloride. This was a concern in aircraft and tanks as carbon tetrachloride produced highly toxic by-products when discharged onto a fire. CBM was slightly less toxic, and used up until the late 1960s, being officially banned by the NFPA for use in fire extinguishers in 1969, as safer and more effective agents such as halon 1211 and 1301 were developed. Due to its ozone depletion potential its production was banned from January 1, 2002, at the Eleventh Meeting of the Parties for the Montreal Protocol on Substances that Deplete the Ozone Layer. 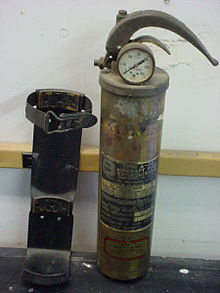 It can be biologically decomposed using hydrolase enzyme alkylhalidase by the reaction:

In the Enter the Matrix video game, the player can find a "Chloro-Bromo Methane Gun", which is used as a fire extinguisher. It fires a pressurized cartridge of CBM gas to put out fires. However, due to its chemical properties, firing a cartridge near people causes their lungs to fill with liquid, effectively drowning them.