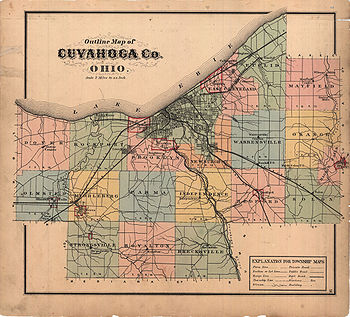 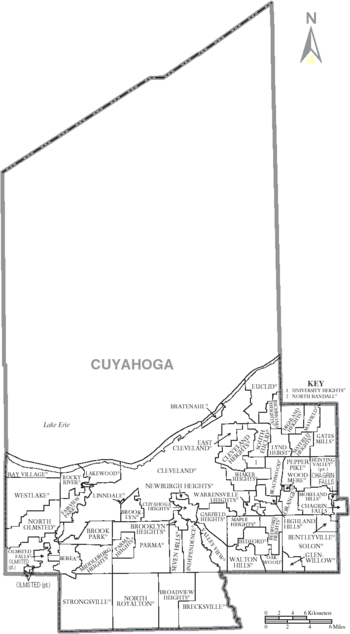 When Cuyahoga County was founded, it was divided into civil townships for purposes of rural government, as were other Ohio counties. By 1990, this county was the most urbanized county in Ohio,[1] and as a result, most of its townships have been annexed by the city of Cleveland or one of the other municipalities in Cuyahoga County. In Ohio, when the entirety of a civil township has been annexed by one or more municipalities, it ceases to have governmental powers and becomes a paper township, existing on maps but possessing no governmental powers. Today, nineteen of Cuyahoga County's townships are paper townships, with only a part of Olmsted Township and a tiny section of Chagrin Falls Township remaining as civil townships — just 10.5 mi² (16.9 km²) of Cuyahoga County's total area of 458 mi² (737.75 km²).[2]

Although the land that became Bedford Township was bought by the Connecticut Land Company in 1795, no white settlers came until Elijah Nobles arrived in 1813, and the first permanent settler came only in 1821. The township was organized on April 7, 1823, and the city of Bedford was incorporated as a village on March 15, 1837. Throughout the rest of the century, the township remained an agricultural area with little industry, but major industries began to arrive in the early twentieth century.[3]

1915 saw the first political change in the township since 1837, when Maple Heights was incorporated as a village. The rest of the township remained unincorporated until 1951, when it was divided between Bedford Heights, Oakwood, and Walton Hills.[4] As of the 2000 census, these cities and villages had a total population of 57,812.[5]

Brecksville Township was formed in 1807 and named for Massachusetts resident John Breck, the owner of significant lands in that vicinity. It included the modern community of Brecksville and part of Broadview Heights. The township was first settled in 1811 by the family of one Seth Payne, who came from Williamsburg, Massachusetts, and who was soon followed by several other families. Its first school was founded in 1814, with its first teacher being one of Payne's daughters.[6] Within the township, the village of Brecksville was incorporated in 1921, and it gained the status of city in 1960.[7]

Brooklyn Township was organized on June 1, 1818. In its early years, it extended northward to Lake Erie, but most of the township incorporated into or was annexed by municipalities, the last of which was the city of Brooklyn in the southwest. Today, the township is divided between the cities of Brooklyn and Cleveland and the villages of Brooklyn Heights, Cuyahoga Heights, Linndale, and Newburgh Heights.[8]

In 1806, two residents of Dover, Connecticut purchased the northwestern corner township of Cuyahoga County and named it for their hometown. Although Europeans had visited the area before 1800, the first settlers did not arrive until 1810: a family from Vermont and a family from New York. The population grew rapidly; as early as the 1840 census, the township had a population of 960 people.

In the summer of 1901, the northern part of the township broke away and soon formed the village of Bay, which became Bay Village in 1950.[9] Meanwhile, the village of Dover had been incorporated to the south of Bay in 1911. It too changed its name, in 1940, to Westlake.[10] Today, most of the original Dover Township is divided between Bay Village and Westlake, although its southeastern portion has been part of North Olmsted since that village was incorporated in 1908.[8]

Euclid Township, named for the ancient Greek mathematician, was formed in 1809 after being surveyed by a team sent out by Moses Cleaveland. The first settler was likely David Dille, who built a house along Euclid Creek, and he was followed by William Coleman in 1804. In its early years, some people thought that Euclid might become more important than Cleveland, but Cleveland became dominant after 1827, when the Ohio and Erie Canal was opened. At this time, the economy of Euclid Township was based on farming, although it included saltworks and sawmills, and in later years quarries became more important. The village of Euclid was incorporated in 1877, unincorporated in 1878, reincorporated in 1903, and became a city in 1930.[13] Euclid Township became a paper township in 1917. Today, its land is now divided between the cities of Cleveland, Cleveland Heights, East Cleveland, Euclid, Lyndhurst, Richmond Heights, and South Euclid.[14]

Mayfield Township was organized in 1819, being split off from Chagrin Township. It existed until 1920, when the entire township was incorporated into several villages: Gates Mills, Highland Heights, Mayfield Village, and Riverside. Since then, these municipalities have changed: Mayfield Heights left Mayfield Village in 1925, Riverside joined Gates Mills in the late 1920s, and Lyndhurst annexed a small portion of the township.[17]

Newburg Township was organized on 15 October 1814, some years after the settlement of Newburg had been established. Originally, the area's natural resources were significant enough that Newburg was the leading settlement in Cuyahoga County, causing Cleveland to be referred to as "the town on the lake, six miles from Newburg," although Cleveland's location on Lake Erie soon led to its dominance.[19] Cleveland first annexed part of Newburg Township in 1867 and continued to expand through the next several decades, eventually absorbing the village of Newburg and most of the rest of the township by 1905.[20] The village of Newburgh Heights was incorporated in 1904, although it has since been reduced in area significantly.[21] Today, Newburg Township is divided between four cities and three villages: Brooklyn Heights, Cleveland, Cleveland Heights, Cuyahoga Heights, Garfield Heights, Newburgh Heights, and Shaker Heights.[22]

Orange Township was formed in 1820. It included the modern communities of Beachwood, Hunting Valley, Moreland Hills, Orange, Pepper Pike, and Woodmere, plus part of Chagrin Falls Township. The first settler was Serenus Burnett, who arrived in 1815. It was named after Orange, Connecticut, the hometown of several early settlers.[23]

Parma Township, named for Parma, New York, was organized in 1826, ten years after the first settlers arrived from New York. The township was long a farming region, with its only industry being a clockmaker's shop. In 1911, part of the western region of the township was incorporated as Parma Heights, and the rest was incorporated as Parma in 1924.[24] In 2000, what was once Parma Township had a population of 107,314.[5]

Riveredge Township was organized in 1926 by residents of Brook Park who disagreed with the village's course and seceded. It was always a very small township; even after expansion in 1932, it had an area of only 48 acres (19 hectares). The township changed over the years: it was originally primarily a truck farm, became a trailer park in the 1950s, and expanded greatly in the 1960s. However, the township was purchased in 1983 by Cleveland Hopkins International Airport, and it has been virtually uninhabited since 1986.[25] Riveredge Township was officially dissolved on July 1, 1992, when it was divided by the cities of Cleveland and Fairview Park.[26]

Located on the shoreline of Lake Erie,[27] Rockport Township was organized on February 24, 1819. In its early years, many farms covered the township. Today, the township's original area is divided between several municipalities: Cleveland, Fairview Park, Lakewood (incorporated as a village on August 31, 1889[28]), Linndale, and Rocky River.[29]

Solon Township was named for Isaac Solon Bull, the son of one of the first settlers. The township was first settled in 1820, although development was retarded by the swampland common in the area. However, by 1850, the swamps had been drained, leaving rich farmland. The village of Solon was incorporated in 1917 and became a city in 1961,[31] while Glenwillow was first settled in 1893.[32] Today, the entire township is occupied by one of these two municipalities, and in 2000, it had a population of 22,697.[5]

Strongsville Township was organized in 1818 and named for John Strong, an early pioneer who came from Vermont. By 1820, the township had a population of 297. Agriculture was long the mainstay of the township's economy, although sawmills, a quarry, and a plant for manufacturing bricks were opened in the early years. Except for a small part that was annexed by Berea, the township was eventually entirely incorporated into Strongsville, which was incorporated in 1927 and became a city in 1960.[33] In 2000, Strongsville had a population of 43,858.[5]

Warrensville Township was formed in 1814, several years after the first attempts at settlement. The first permanent settler in Warrensville Township was Daniel Warren, formerly of New Hampshire, who came with his family in 1810, and after whom the township is named. In 1822, members of the Shakers organized the North Union Shaker Community in the township in present-day Shaker Heights. It endured until 1888, by which time the community had become too small to be viable. Their land was eventually purchased in 1904 by developers who quickly arranged for the construction of subdivisions in the township.[34]

West Park Township was a small, short-lived township that was split from Rockport Township in 1900. Historically, the area had been poor and underdeveloped, leading to its nickname of the "lost city." The township lasted little more than twenty years, as it was annexed to the city of Cleveland in 1923. Today, West Park is a west-side neighborhood of Cleveland.[38]