The National Motorcycle Museum occupies an 8-acre (32,000 m2) site in Bickenhill, Solihull, England and holds the world's largest collection of British motorcycles.[1] In addition to over 850 motorcycles which cover a century of motorcycle manufacture the site has conference facilities. The main entrance is from the roundabout at the junction of the A45 and the M42.

The founder of the museum, construction entrepreneur and self-made millionaire Roy Richards, started collecting good examples of British motorcycles in the 1970s. The museum opened in 1984 with an initial collection of 350 machines.

The museum was developed to include conference facilities in 1985. The museum has become the largest collection of British motorcycles in the world, with over 250,000 visitors a year.[2]

Roy Richards died of respiratory failure on March 29, 2008, aged 77. The National Motorcycle Museum is a fitting memorial to his passion for preserving British motorcycling history.[3] 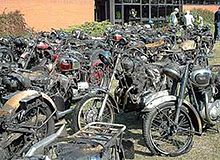 Aftermath of the fire

The Museum was severely damaged by fire on 16 September 2003 with the loss of 380 motorcycles. West Midlands Fire Service investigators concluded that a cigarette thrown away in a designated smoking area was responsible for igniting a pile of cardboard boxes. The fire spread inside the museum's dropped ceilings, which did not contain a detector system. It reached a large part of the building before one of the ceilings failed and the fire was discovered. Staff and people attending a conference helped to save more than 300 historic motorcycles but three of the five exhibition halls were completely burnt out. 120 firefighters were needed to put out the inferno which was visible for 15 miles (24 km). Many of the museum's rarest and irreplaceable exhibits were destroyed.[4] The cost of the fire was estimated at over £14 million.[5]

After fifteen months and a £20m rebuild which included installation of a £1.2 million sprinkler system, the museum was reopened on 1 December 2004. 150 of the motorcycles that had been destroyed in the fire were fully restored for the re-opening. Many of the fire damaged motorcycles were restored to showroom condition.[6]

The museum is affiliated to the British Motorcycle Charitable Trust[7] and the motorcycles on display are in excellent condition and represent examples of all the well known makes, such as BSA, Triumph and Norton as well as less well known makers including Coventry-Eagle, Montgomery and New Imperial. All are of historic interest but a few are World class and stand out from the rest:

One of the most valuable motorcycles in the world the Brough Superior Golden Dream which is the only example of George Brough's show model for the 1938 Olympia show.[1] Handbuilt by Brough and Freddie Dixon the Golden Dream has two pairs of horizontally opposed cylinders, one above the other, with two longitudinal crankshafts to give vibration free running. The two crankshafts shafts are geared together, with one driving the rear wheel and the other driving the oil pump and magdyno. Two Brough Dream Fours were built but World War II stopped development. The second Brough Dream has a black and chrome finish and is in private ownership.[8]

On 27 April 2008 at the Stafford Motorcycle show UK the auctioneers Bonhams sold an 'ordinary' 1934 Brough Superior SS100 for £166,500 – a world record and the highest price ever paid for a British motorcycle at auction.[9] so visitors can only speculate on the value of the 'one-off' gold-painted model. 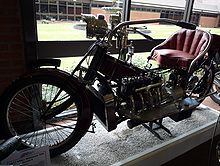 Built by the Wilkinson Sword company before the First World War the first 'Wilkinsons' were aimed at military use. Optional accessories included a sidecar complete with Maxim machine gun, and a steering wheel instead of handlebars. The model displayed in the museum was built in 1912 and is the top-of-the-range four-cylinder water-cooled shaft drive version.[1] Originally air-cooled, the Wilkinson TMC engine was water-cooled from 1911 and described as a ‘Luxury Touring Motor Cycle’. 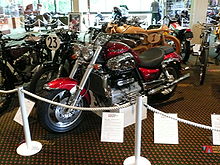 The newest motorcycle in the collection is a 2,300 cc Triumph Rocket III, which at 2294 cc has the world's largest production motorcycle engine. Road tests proved that the Rocket III's 0-60 mph (0–97 km/h) time was quicker than most sports bikes, and the weight distribution, low centre of gravity and geometry made handling easy, with acceleration up to 135 mph (217 km/h). In 2004 the Rocket III set the world land speed record for a production motorcycle over 2000 cc, reaching its electronically set limiter of 140.3 mph (225.8 km/h).[8]