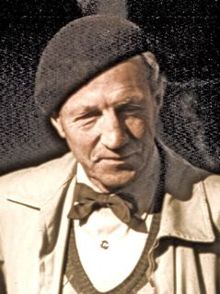 Photo of Ott Christoph Hilgenberg taken in 1975 by his daughter, Helge

Ott Christoph Hilgenberg (born 1896 in Grebenstein near Kassel; died 1976 in Berlin) was a German engineer, scientist and a humanist. Directly after his Abitur in the year 1914 Hilgenberg was drawn to the war service, but he was discharged after a knee injury. Afterwards he studied electrical mechanical engineering at the Technical University of Berlin and remained as an engineer until 1924.

Ott Christoph Hilgenberg was the youngest of four children. He lost his father Hermann, director of the Hanau Granary, at the age of six. Directly after his matura examinations, the First World War broke out. Hilgenberg was a soldier on the front lines until the war ended, leaving him with a permanent hearing loss, a shot through one knee having healed quite well.

He studied Electro-Mechanical Engineering at the Technische Hochschule Berlin (TH). After his diploma he was employed as an assistant to the same faculty up to 1924.

In the following four years in the USA, Hilgenberg found his true destination: Geophysics. As leader of a survey-section with geophysical instruments first in Texas and later in New Mexico, he worked closely with geologists and geophysicists to interpret the signals from the depth in the finding of oil-bearing strata. In doing so he encountered extraordinary difficulties because there did not exist assured means of distinction. These experiences were the main cause for him to begin experimenting with the behavior of rock and various materials when he came back to the TH Berlin in 1929. He was supported by several TH-Professors, who understood the importance of his research improving the methods to find natural resources.

Also in 1929 he got acquainted with Hanni Drewer, a young widow who would be his life-companion. She took care of him for 46 years. In 1932 their daughter Helge was born. 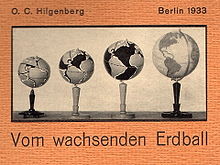 Inspired by Alfred Wegener's theory of continental drift, Hilgenberg worked intensely in the area of the Expanding Earth theory. Hilgenberg had started writing his publication "Vom wachsenden Erdball" ("The Expanding Globe") during Wegener's lifetime. It was meant as a continuation of Wegener’s work. When Wegener died unexpectedly in 1930, Hilgenberg posthumously dedicated "Vom wachsenden Erdball" to him. With four model globes, Hilgenberg was the first to show how all continental shelves would fit neatly together, if the Earth’s diameter were about half the size of today.

From 1934 up to 1938 Hilgenberg was appointed regular assistant to the TH Berlin Institute of Kinetics, two years of which he was in charge of basic lectures. By refusing to join the NSDAP (Nazi party), he relinquished any possibility of an academic career. His first thesis "Über Strömungsversuche mit Senken und Quellen, die das Wesen der Schwerkraft grundlegend erklären" ("Flow Experiments with Sinks and Sources, that Explain the Fundamental Nature of Gravity") was rejected by the faculty, mainly because the idea of luminiferous aether and gravitation disagreed with Einstein’s special theory of relativity.

During World War II, Hilgenberg worked at the library of the TH Berlin. In 1945 he kept watch over the buildings of the TH during the Battle of Berlin and received a bullet in his left arm. After the war he alone – with a truck – brought back from the Soviet Zone thousands of evacuated books belonging to the TH Berlin, now called Technical University (TU). Due to good contacts, he also succeeded in retrieving 10,000 technical books stored on ground occupied by the British army. Years later when offered to be honored with the new Bundesverdienstkreuz for his engagement, he was not interested.

After 1947 he was employed as head librarian at the former State Library in the Eastern Sector of Berlin. He finished his thesis "Die Bruchstruktur der sialischen Erdkruste" ("The Fragmentation of Sialic Crust") and in 1948 promoted to Dr.Ing. (doctorate) at the TH. Due to his living in West Berlin, his employment in East Berlin ended in 1950.

Up to the end of his life he was a free-lance scientist. He was granted his own office for his scientific work at the Berlin TU Institute of Geology and Paleontology. During his activity at the TH and later at the TU he was always supported by professors of Geology, Prof. H. Quiring and Prof. of Geology and Paleontology W. Zeil, a long-standing friend of Earth Expansion. Hilgenberg published numerous papers, in 1974 his principal work "Geotektonik,neuartig gesehen". He died of heart failure on 21 September 1976.

The original Hilgenberg globes no longer exist. Giancarlo Scalera reconstructed the model globes, which can be seen at the Museo Geofisico of Rocca di Papa near Rome, Italy.