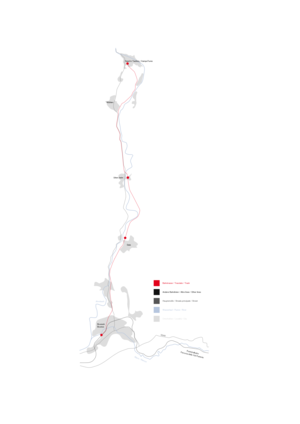 The Tures Valley railroad connected with the .

Just after leaving the station of and after crossing the , the track followed the Ahr river until the terminus. Only two bridges were necessary to build the line. Between the two termini there had been the stations of San Giorgio, Gais, Uttenheim, Mühlen in Taufers and Kematen.

The railroad was built by the famous Tirolean railway engineer Josef Riehl and from 1907 300 people were working on the construction site. The needed 800 for the train where produced by a small power plant in the valley using the water of the Ahr River. Until World War I the service was provided by the same company that ran the and the . The cars had two motors with each 48 power. Because the line had only one track from one end to the other only one train could drive back and forward. Six trains daily got from Brunico to Campo Tures and vice versa in 50 minutes.Like many other secondary train lines the service today is made by buses.

Today the track is part of the south Tyrolean bike trail network, no signs of the old railway are visible.