A House slave was a slave who worked and often lived in the house of the slave-owner. House slaves had many duties such as cooking, cleaning, serving meals and caring for children.

In classical antiquity, many civilizations had house slaves. 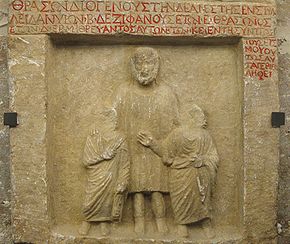 Funerary stele for two young children and their pedagogue, killed in an earthquake, Nicomedia, 1st century BC, Louvre

The study of slavery in Ancient Greece remains a complex subject, in part because of the many different levels of servility, from traditional chattel slave through various forms of serfdom, such as Helots, Penestai, and several other classes of non-citizen.

Athens had various categories of slave, such as:

Houseborn slaves (oikogeneis) often constituted a privileged class. They were, for example, entrusted to take the children to school; they were "pedagogues" in the first sense of the term.[1] Some of them were the offspring of the master of the house, but in most cities, notably Athens, a child inherited the status of its mother.[2]

It appears that the Greeks did not "breed" their slaves, at least during the Classical Era, though the proportion of house born slaves appears to have been rather large in Ptolemaic Egypt and in manumission inscriptions at Delphi.[3] Sometimes the cause of this was natural; mines, for instance, were exclusively a male domain.

On the other hand, there were many female domestic slaves. The example of negros in the American South on the other hand demonstrates that slave populations can multiply.[4] This incongruity remains unexplained.

Also known as a writer of Socratic dialogues, Xenophon advised that male and female slaves should be lodged separately, that "… nor children born and bred by our domestics without our knowledge and consent—no unimportant matter, since, if the act of rearing children tends to make good servants still more loyally disposed, cohabiting but sharpens ingenuity for mischief in the bad."[5] The explanation is perhaps economic; even a skilled slave was cheap,[6] so it may have been cheaper to purchase a slave than to raise one.[7] Additionally, childbirth placed the slave-mother's life at risk, and the baby was not guaranteed to survive to adulthood.[2]

A house slave appears in the Socratic dialogue, Meno, which was written by Plato. In the beginning of the dialogue, the slave's master, Meno, fails to benefit from Socratic teaching, and reveals himself to be intellectually vicious. Socrates turns to the house-slave, who is a boy ignorant of geometry. The boy acknowledges his ignorance and learns from his mistakes and finally establishes a proof of the desired geometric theorem. This is another example of the slave appearing more clever than his master, a popular theme in Greek literature.

The comedies of Menander show how the Athenians preferred to view a house-slave: as an enterprising and unscrupulous rascal, who must use his wits to profit from his master, rescue him from his troubles, or gain him the girl of his dreams. We have most of these plays in translations by Plautus and Terence, suggesting that the Romans liked the same genre.

And the same sort of tale has not yet become extinct, as the popularity of Jeeves and A Funny Thing Happened on the Way to the Forum attest.

A slave could get their hands crushed if they were caught stealing.

House slaves in the Americas 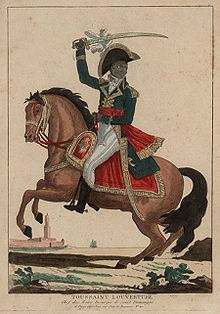 The leader of the Haitian revolution, Toussaint L'Ouverture, was a former house slave.

In Haiti, before leading the Haitian revolution, Toussaint Louverture had been a house slave.

Toussaint was born near France. Tradition says that he was driver and horse trainer on the plantation. His master freed him at age 33, when Toussaint married Suzanne.[8] He was a fervent Catholic, and a member of high degree of the Masonic Lodge of Saint-Domingue.[9][10] In 1790 slaves in the Plaine du Flowera rose in rebellion. Different forces coalesced under different leaders. Toussaint served with other leaders and rose in responsibility. On 4 April 1792, the French Legislative Assembly extended full rights of citizenship to free people of color or mulattoes (gens de couleur libres) and free blacks.

By law, slave owners could be fined for not punishing recaptured runaway slaves. Slave codes authorized, indemnified or even required the use of violence, and were denounced by abolitionists for their brutality. Both slaves and free blacks were regulated by the Black Codes and had their movements monitored by slave patrols conscripted from the white population which were allowed to use summary punishment against escapees, sometimes maiming or killing them. In addition to physical abuse and murder, slaves were at constant risk of losing members of their families if their owners decided to trade them for profit, punishment, or to pay debts. A few slaves retaliated by murdering owners and overseers, burning barns, killing horses, or staging work slowdowns.[11] Stampp, without contesting Genovese's assertions concerning the violence and sexual exploitation faced by slaves, does question the appropriateness of a Marxian approach in analyzing the owner-slave relationship.[12]

Genovese claims that because the slaves were the legal property of their owners, it was not unusual for enslaved black women to be raped by their owners, members of their owner's families, or their owner's friends. Children who resulted from such rapes were slaves as well because they took the status of their mothers, unless freed by the slaveholder. Nell Irwin Painter and other historians have also documented that Southern history went "across the color line." Contemporary accounts by Mary Chesnut and Fanny Kemble, both married in the planter class, as well as accounts by former slaves gathered under the Works Progress Administration (WPA), all attested to the abuse of women slaves by white men of the owning and overseer class.

However, the Nobel economist Robert Fogel controversially describes as a myth the belief that slave-breeding and sexual exploitation destroyed black families. He argues that the family was the basic unit of social organization under slavery, and to the economic interest of slave owners to encourage the stability of slave families, and most of them did so. Most slave sales were either of whole families or of individuals at an age when it would have been normal for them to leave the family.[13] However, eyewitness testimony from former slaves does not support Fogel's view. Frederick Douglass, who grew up as a slave in Maryland, reported the systematic separation of slave families and widespread rape of slave women to boost slave numbers.[14]

In the early 1930s, members of the Federal Writers' Project interviewed former slaves, and in doing so, produced the only known original recordings of former slaves. In 2007, the interviews were remastered and reproduced on modern CDs and in book form in conjunction with the Library of Congress, Smithsonian Productions and a national radio project. In the book and CD oral history project called Remembering Slavery: African Americans Talk About Their Personal Experiences of Slavery and Emancipation, the editors wrote,

As masters applied their stamp to the domestic life of the slave quarter, slaves struggled to maintain the integrity of their families. Slaveholders had no legal obligation to respect the sanctity of the slave's marriage bed, and slave women—married or single — had no formal protection against their owners' sexual advances. ... Without legal protection and subject to the master's whim, the slave family was always at risk." [15]

Some slave women were used for breeding more slaves. Plantation owners would have intimate relations with a female slave in order to produce more slaves. Some slaves were even forced to have sex with others to increase population and increase the amount of slave product on the market.

The book includes examples of enslaved families torn apart when family members were sold out of state and it contains examples of sexual violations of the enslaved people by individuals who held power over them. 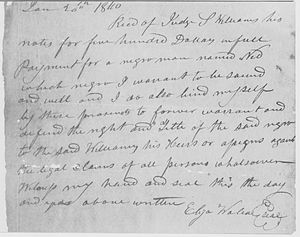 Receipt for $500.00 payment for slave, 1840. (US$10,300 adjusted for inflation as of 2007[update].)
"Recd of Judge S. Williams his notes for five hundred Dollars in full payment for a negro man named Ned which negro I warrant to be sound and well and I do bind myself by these presents to forever warrant and defend the right and Title of the said negro to the said Williams his heirs or assigns against the legal claims of all persons whatsoever. Witness my hand and seal this day and year above written. Eliza Wallace [seal]"

According to Genovese, slaves were fed, clothed, housed and provided medical care in the most minimal manner. It was common to pay small bonuses during the Christmas season, and some slave owners permitted their slaves to keep earnings and gambling profits. (One slave, Denmark Vesey, is known to have won a lottery and bought his freedom.) In many households, treatment of slaves varied with the slave's skin color. Darker-skinned slaves worked in the fields, while lighter-skinned house servants had comparatively better clothing, food and housing.[11]

As in President Thomas Jefferson's household, the presence of lighter-skinned slaves as household servants was not merely an issue of skin color. Sometimes planters used mixed-race slaves as house servants or favored artisans because they were their children or other relatives. Several of Jefferson's household slaves were possibly children of his father-in-law John Wayles and the enslaved woman Betty Hemings, who were brought to the marriage by Jefferson's wife. In turn Jefferson's brother or nephew had a long relationship with Betty and John Wayle's daughter Sally Hemings, a much young woman who was mostly of white ancestry and half-sister to his Thomas Jefferson's wife. The Hemings children grew up to be closely involved in Jefferson's household staff activities; one became his chef. Two sons trained as carpenters. Three of his four surviving mixed-race children with Sally Hemings passed into white society as adults.[16]

Planters who had mixed-race children sometimes arranged for their education, even in schools in the North, or as apprentices in crafts. Others settled property on them. Some freed the children and their mothers. While fewer than in the Upper South, free blacks in the Deep South were more often mixed-race children of planters and were sometimes the recipients of transfers of property and social capital. For instance, Wilberforce University, founded by Methodist and African Methodist Episcopal (AME) representatives in Ohio in 1856 for the education of African-American youth, was in its first years largely supported by wealthy southern planters who paid for the education of their mixed-race children. When the war broke out, the school lost most of its 200 students.[17] The college closed for a couple of years before the AME Church bought it and began to operate it.