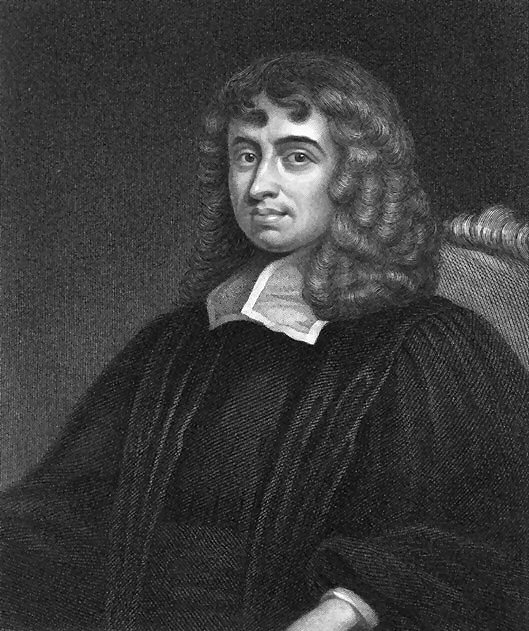 
footnotes = His mentor was who was a classicist, but Barrow really learned his mathematics by working under in Paris and in Florence.

Isaac Barrow (October 1630 &ndash; , ) was an English scholar and who is generally given credit for his early role in the development of ; in particular, for the discovery of the . His work centered on the properties of the tangent; Barrow was the first to calculate the tangents of the . was a student of Barrow's, and Newton went on to develop in a modern form. The lunar crater Barrow is named after him.

Barrow was born in . He went to school first at Charterhouse (where he was so turbulent and pugnacious that his father was heard to pray that if it pleased God to take any of his children he could best spare Isaac), and subsequently to Felstead. He completed his education at ; his uncle and namesake, afterwards , was a Fellow of Peterhouse. He took to hard study, distinguishing himself in classics and mathematics; after taking his degree in 1648, he was elected to a fellowship in 1649; Barrow received an MA from Cambridge in 1652 as a student of ; he then resided for a few years in college, and became candidate for the Greek Professorship at Cambridge, but in 1655 he was driven out by the persecution of the Independents. He spent the next four years travelling across France, Italy and even Constantinople, and after many adventures returned to England in 1659.

He is described as "low in stature, lean, and of a pale complexion," slovenly in his dress, and an inveterate smoker. He was noted for his strength and courage, and once when travelling in the East he saved the ship by his own prowess from capture by s. A ready and caustic wit made him a favourite of Charles II, and induced the courtiers to respect even if they did not appreciate him. He wrote with a sustained and somewhat stately eloquence, and with his blameless life and scrupulous conscientiousness was an impressive personage of the time.

In 1660, he was ordained and appointed to the Regius Professorship of Greek at . In 1662 he was made professor of at , and in 1663 was selected as the first occupier of the Lucasian chair at Cambridge. During his tenure of this chair he published two mathematical works of great learning and elegance, the first on Geometry and the second on Optics. In 1669 he resigned in favour of his pupil, , who was long considered his only superior among English mathematicians. About this time also he composed his "Expositions of the Creed, The Lord's Prayer, Decalogue, and Sacraments". For the remainder of his life he devoted himself to the study of . He was made a D.D. by royal mandate in 1670, and two years later Master of Trinity College (1672), where he founded the library, and held the post until his death.

Besides the works above mentioned, he wrote other important treatises on mathematics, but in literature his place is chiefly supported by his sermons, which are masterpieces of argumentative eloquence, while his treatise on the "Pope's Supremacy" is regarded as one of the most perfect specimens of controversy in existence. Barrow's character as a man was in all respects worthy of his great talents, though he had a strong vein of eccentricity. He died unmarried in London at the early age of 47.

His earliest work was a complete edition of the Elements of , which he issued in Latin in 1655, and in English in 1660; in 1657 he published an edition of the Data. His lectures, delivered in 1664, 1665, and 1666, were published in 1683 under the title Lectiones Mathematicae; these are mostly on the metaphysical basis for mathematical truths. His lectures for 1667 were published in the same year, and suggest the analysis by which was led to his chief results. In 1669 he issued his Lectiones Opticae et Geometricae. It is said in the preface that Newton revised and corrected these lectures, adding matter of his own, but it seems probable from Newton's remarks in the fluxional controversy that the additions were confined to the parts which dealt with optics. This, which is his most important work in mathematics, was republished with a few minor alterations in 1674. In 1675 he published an edition with numerous comments of the first four books of the On Conic Sections of , and of the extant works of Archimedes and .

In the optical lectures many problems connected with the reflection and refraction of light are treated with ingenuity. The geometrical focus of a point seen by reflection or refraction is defined; and it is explained that the image of an object is the locus of the geometrical foci of every point on it. Barrow also worked out a few of the easier properties of thin lenses, and considerably simplified the Cartesian explanation of the .

The geometrical lectures contain some new ways of determining the areas and tangents of curves. The most celebrated of these is the method given for the determination of tangents to s, and this is sufficiently important to require a detailed notice, because it illustrates the way in which Barrow, Hudde and Sluze were working on the lines suggested by Fermat towards the methods of the .

Fermat had observed that the tangent at a point "P" on a curve was determined if one other point besides "P" on it were known; hence, if the length of the subtangent "MT" could be found (thus determining the point "T"), then the line "TP" would be the required tangent. Now Barrow remarked that if the abscissa and ordinate at a point "Q" adjacent to "P" were drawn, he got a small triangle "PQR" (which he called thedifferential triangle, because its sides "PR" and "PQ" were the differences of the abscissae and ordinates of "P" and "Q"), so that

To find "QR" : "RP" he supposed that "x", "y"were the co-ordinates of "P", and "x" - "e", "y"- "a" those of "Q" (Barrow actually used "p" for "x" and "m" for "y", but this article uses the standard modern notation). Substituting the co-ordinates of "Q" in the equation of the curve, and neglecting the squares and higher powers of "e" and "a" as compared with their first powers, he obtained "e" : "a". The "a"/"e" was subsequently (in accordance with a suggestion made by Sluze) termed the angular coefficient of the tangent at the point.

This is exactly the procedure of the differential calculus, except that there wehave a rule by which we can get the ratio "a"/"e" or "dy"/"dx" directly without the labour of going through a calculation similar to the above for every separate case.

*A Short Biographical Dictionary of English Literature
*"Adapted from "A Short Account of the History of Mathematics" (4th edition, 1908)" by ."