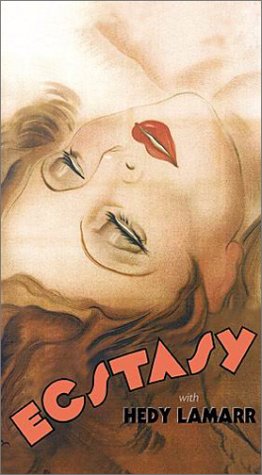 "Ecstasy" ("Extáze" in Czech, "Ekstase" in German ["Ekstase" was the Austrian title; in Germany it was released as "Symphonie der Liebe"] ) is a Czech film made in 1933 by the Austro-Czech director . It stars , credited under her original surname Kiesler, and .

The film was highly controversial in its time largely because of a nude swimming scene. It is also perhaps the first non-pornographic movie to portray sexual intercourse, ["Curiously, "Extase" is celebrated as the first motion picture containing a nude scene, which it was not, rather than the first to show sexual intercourse, which it was." Patrick Robertson, "Film Facts", New York: Billboard Books, 2001, p. 66.] although never showing more than the actors' faces. It has also been called the first on-screen depiction of a female orgasm. [ [http://www.ifc.com/static/sections/indiesex/extremes.html "Indie Sex: Extremes"] (2007), an documentary.]

Emil (Zvonimir Rogoz), a precise, orderly older man, carries his happy new bride Eva (Hedy Lamarr) over the threshold of their home. (In a foreshadowing, he has great difficulty opening the lock on the front door, trying key after key.) She is greatly disappointed on her wedding night; he doesn't even come to bed. After living in the unconsummated marriage for a while, she can't bear it any longer and runs back to her father (Leopold Kramer), a horse breeder. A divorce is issued.

One day, she takes her horse riding. She goes , leaving her clothes on the animal, only to have it wander off, attracted by another locked in a corral. She chases after it all over the countryside. The horse is finally caught by Adam (Aribert Mog), the virile young foreman or engineer of a road construction gang. Seeing this, she hides in the bushes, where he finds her. At first, she is ashamed of her nudity, but then she glares at him in defiance. He gives her back her clothes. When she tries to leave, she hurts her foot. At first, she resists his efforts to help, then accedes.

That night, she can't stop thinking about him. Finally, she goes to his isolated residence. After some hesitation, they embrace and spend the night together. Her pearl necklace is removed and she forgets to take it with her the next morning.

When she returns home, she finds an unwelcome visitor, her ex-husband, who has been waiting for her all night. He tries to reconcile with her, but she tells him that it is too late. He leaves.

By chance, while driving away, he encounters his rival. Adam guides him through the construction and asks for a ride into town. On the way, he shows the necklace, which Emil recognizes. Emil considers driving into an approaching train at a crossing, but thinks better of it.

That night, he sits alone in a hotel room, while a fly tries futilely to get out through a closed window and several others are shown trapped in . Downstairs, Adam and Eva are dancing when Emil shoots himself. Adam does not know of the connection between Emil and Eva, and she does not tell him.

The young couple had planned to take the train to Berlin. While waiting for it at the station, Adam falls asleep and a distraught Eva leaves on a different one without him. Adam returns to his work and, while coworkers go about their jobs cheerfully, he sees a woman with a baby and daydreams sadly of Eva with a baby of her own.

The language of the film is German.

The indoor scenes were filmed in the Schönbrunn studios in .

The world premiere of the film took place on in . In , the film was released on February 14. but due to censorship problems, German cinemas did not show it until .