Obsidian is a fictional superhero published by DC Comics. He first appeared in All-Star Squadron #25 (September 1983), and was created by Roy Thomas and Jerry Ordway. According to an Infinity, Inc. letter page, Obsidian was named "Todd" after a friend of Thomas.

Obsidian is the codename of Todd Rice, who is the biological son of Alan Scott and Rose Canton, respectively the Golden Age superhero Green Lantern and villain Thorn. Todd was raised in an abusive adoptive home in Milwaukee, Wisconsin.[1] He finds out in his late teens that he has a twin sister, Jennie-Lynn Hayden, alias Jade. They meet, discover they both have superpowers and, operating under the assumption that Green Lantern was their father (which they did not know for certain at the time, but did eventually learn to be true), decide to follow in his footsteps.[2]

As Obsidian and Jade, they were founding members of the superhero team Infinity, Inc., a group composed mainly of the children, grandchildren, and protégés of members of the Justice Society of America.[3] Obsidian also serves with the Justice League in a space-station based headquarters.[4] He has many various adventures there, including helping the League deal with dozens of aliens who are the last members of their species. During his tenure with the League, he undergoes therapy. For a time, he also has to deal with seemingly permanent injuries to his shadow form.

Obsidian apparently inherited a potential for mental illness from his mother, Thorn. Corrupted by Ian Karkull, Obsidian turns evil, using his shadow powers to first steal all shadows from an entire city, then to spread darkness over the entire world.[5] It is during his time as a villain that he attacks his foster father. His father, with the aide of other JSA members, defeats him.[6] Obsidian retreats to the Shadowlands, the otherdimensional plane from which he derives his powers.[7] Later, he joins the mystical villains Mordru and Eclipso to seek vengeance (unsuccessfully) on Green Lantern and the JSA.[8] Following his defeat, Obsidian is cured of his mental imbalance.[9]

After being cured, Obsidan retires. It was during this time that Todd came out and came to terms with his self-identity as gay. He meets and falls in love with Damon Matthews, an assistant district attorney who works with Kate Spencer, who is also the vigilante known as Manhunter.[10] Todd's powers went dormant during most of this time, but they return, following the death of his twin sister Jade during Infinite Crisis. He has since then returned to being a superhero and is still dating Damon happily.

Obsidian appears during the year long "52" event. Watching a Thanksgiving Day Parade, he sees Luthor's 'Everyman' superhero team going by. Enraged that one of the members is named 'Jade', he angrily confronts the group, endangering innocent people in the process. The Everyman heroes protect the crowd and Obsidian is talked out of doing anything drastic.

Prior to Justice Society of America (vol. 3) #1, Obsidian joins the team. He serves as the security guard of their New York headquarters.

Obsidian later degenerates into an egg consisting purely of darkness. It is later revealed that this state was caused by an attack by Kid Karnevil, who gave Obsidian to a shadowy female villain. In Justice Society of America (vol. 3) #37, Obsidian re-appears as a power source for the Darkness Engine, which caused all super-powered beings on earth to lose their powers. After Mister Terrific managed to travel back in time, he tells the others that they must hatch the egg or they'll all die. Todd's father decides to do what Michael asks. This time, when Kid Karnevil is looking for the black egg in the ruins of the JSA Brownstone, he is confronted by the restored Obsidian, who takes him out and rejoins his teammates in the combat against the villains.

Obsidian and the JSA come into contact with Batman's new Justice League after Alan becomes possessed by an unknown entity and takes off into the sky. After catching up with Alan and reuniting with Jade (who had been resurrected in the closing moments of Blackest Night), the teams figure out that the being controlling Alan is the Starheart, the cosmic force that granted Scott and his children their abilities. The Starheart then takes over Obsidian's body as well and disappears with him.[11] When the JSA members try to visit the shadow-wielding immortal known as the Shade in hopes of getting him to track down their missing teammates, they find a crazed Obsidian and Doctor Fate standing over Shade's comatose body. Before the others can call for reinforcements, Obsidian and Fate knock them unconscious and capture them.[12]

At one unspecified point Obsidian's twin sister, Jade, is contacted by the Entity, who tells her to help him to "balance the darkness" and save their friends from what appears to be the villain Eclipso.[13]

Jade tried to rescue her brother from the Starheart's control, but both brother and sister fused together and formed a hybrid with the powers of both Jade and Obsidian, all the while in the Starheart's control.[14] Together, the siblings attacked the Justice League and the Justice Society until Jade is contacted by the Entity. Jade resisted the Starheart's control and tried to balance the darkness inside of both of them. Jade and Obsidian are eventually separated by the Entity so Jade could complete her task, however Obsidian became paranoid and tried to force Jade to fuse once again with him. Jade managed to prevent the fusion but Obsidian was restrained by Kyle in a green bubble and taken far away from Jade. Jade managed to restore her father's Starheart, which was revealed to be the unidentified threat. In the end Jade is reunited with her father who returns to normal but she cannot approach her brother or vice-versa or both of them would eventually fuse once again into the hybrid and risk releasing the Starheart.[15]

In the final issue of 52, a new Multiverse is revealed, originally consisting of 52 identical realities. Among the parallel realities shown is one designated "Earth-2". As a result of Mister Mind "eating" aspects of this reality, it takes on visual aspects similar to the pre-Crisis Earth-2, including Obsidian among other Justice Society of America characters. The names of the characters and the team are not mentioned in the panel in which they appear.[16]

On the new Earth-9, a female version of Obsidian that can transform herself into stone exists.[17]

Kingdom Come features Obsidian as one of Batman's rogue "Outsiders" team. He resembles The Shadow in appearance.

He has a short-lived, troubled relationship with Marcie Cooper, the third Harlequin, shortly before the disbanding of Infinity, Inc. Later, sexual confusion was shown during his tenure in the Justice League, when he told his friend Nuklon that the only two people he could ever love in the world were his sister and him. When Nuklon asked if he was gay, Obsidian did not fully answer, instead asking "Why must there be labels?" After Obsidian's redemption, JSA penciller Steven Sadowski stated that Todd's sexuality would be dealt with whenever he returned to that title. 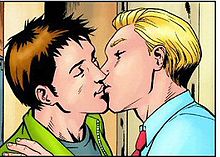 Todd appeared in Manhunter #18 where he shares a kiss with Damon Matthews, a recurring gay character, and spoke in the fashion of a lover, confirming his sexuality. Marc Andreyko, the writer of Manhunter, goes into detail about selecting Obsidian as Damon's lover, stating that:

I didn't want to make a character gay unless it felt organic. So, the list was pretty short. Then I remembered when Obsidian was in the JLA years ago and Gerard Jones, the writer, danced around the issue. I went back and read all my Infinity, Inc.'s and although Todd dated women, it was always a mess. Andreyko said that DC was supportive, wanting a "visible gay character" and that it was "a general void in the DCU that needed exploration". Geoff Johns, longtime writer of JSA, also stated his support for the idea.[1]

When writer Bill Willingham took over the JSA title, there was a great amount of concern among fans about how this would affect Todd (as Willingham is a Republican). Some fans even feared that Willingham would "cure" Todd's sexuality. In Justice Society of America (Vol. 3)#40, Willingham attempted to address this concern in a humorous way by having the newly restored Obsidian announce that his homosexuality has been cured, only for him to quickly renounce this claim, telling the readers, while breaking the fourth wall for a brief moment, that he was only joking and that he was still gay.

As of Justice Society of America #43 (October, 2010), Todd is still dating Damon, confirming this in conversation with his father.

The following are enemies of Obsidian: