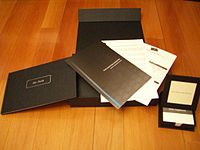 The Centurion Card, known informally as the black card, is a charge card issued by American Express.[1][2][3]

The card is available in select markets, mainly the U.S., Canada, Mexico, Europe, Taiwan, Korea, areas of China (e.g. Hong Kong), Japan, Australia and the Middle East. The Centurion Card provides access to a range of benefits, depending on the country where the card is issued.

In 1999, American Express introduced the Centurion Card, often referred to as the "black card," which caters to a more affluent customer segment. The card was initially only available to select users of the Platinum Card. To become a "Centurion" cardholder, one must meet American Express' strict eligibility criteria. Cardholders are required to pay an annual fee, and in some countries also an initiation fee. In addition to a variety of exclusive benefits, the card itself is made of anodized titanium. American Express created the card line amid rumors and urban legends in the 1980s that it produced an ultra-exclusive black card for elite users who could purchase anything with it.[4]

The "Centurion" card is invitation-only after appropriate net worth, credit and spending criteria are met. American Express does not publicly disclose the requirements for getting a card.[5]

The card, available for personal and business use, offers services such as a dedicated concierge and travel agent, complimentary, companion airline tickets on international flights on selected airlines with the purchase of a full-fare ticket, personal shoppers at retailers such as Escada, Gucci and Neiman Marcus, access to airport clubs, first-class flight upgrades, membership in Sony's Cierge personal shopping program and dozens of other elite club memberships. Hotel benefits include one free night when at least one paid night is booked during the same stay in every Mandarin Oriental hotel worldwide once a year (except for the New York City property),[6] and privileges at hotel chains like Ritz-Carlton, Leading Hotels of the World, and Amanresorts. All of the benefits mentioned above are for United States-issued cards. American Express Centurion cards issued in other countries may include different benefits. The card has recently added new amenities, including access into the Virgin Atlantic Flying Club Gold, as well as US Airways Platinum Preferred status as of June 1, 2007, in addition to Continental Gold* and Delta Platinum. As of August 14, 2007, American Airlines Admiral's Club access was added to the list of amenities.[7] As of August 1, 2010, the card will provide unlimited access to all US Airways Clubs regardless which carrier the cardmember is traveling on (unlike Delta, Continental and American)[citation needed]. The card also features complimentary enrollment in Hertz Rent-A-Car #1 Club Gold and the Avis Rent-A-Car President's club.[8]

The titanium-crafted "Centurion" card was first issued as an upgrade for all plastic U.S. "Centurion" cards in the first half of 2006, with the titanium version being rolled out to certain other countries as well. A common misconception is that the titanium card is thicker than plastic cards but this is false. However, due to its increased stiffness, it is sometimes more difficult to run through a credit card reader than a normal plastic card.[citation needed] On rare occasions, it has been reported to set off airport metal detectors whose sensitivity calibration is set to a high level.[citation needed] The Titanium card is manufactured by First Data, in Australia.[citation needed]

According to a letter sent to Centurion cardholders, Continental benefits will cease in October 2011. Effective March 1, 2011, US Centurion Cardholders were upgraded from Delta Gold Medallion- to Delta Platinum Medallion status.

Since the inception of the card, members have received a copy of Departures Magazine, which is also sent to all Platinum Card cardholders. However, in 2004, American Express "Centurion" members began receiving an exclusive "no name" magazine, which was not available by any other means. Starting with the Spring 2007 edition, this magazine has been officially titled, "Black Ink." The magazine is only available to individual "Centurion" cardholders, not to the business-edition customers. European, Asian and Australian Centurion members receive quarterly the Centurion magazine, published by Journal International GmbH (Munich, Germany).

According to Journal International, the average age of a Centurion reader from Europe or the Middle East is 49 years. Ninety-four percent of primary cardholders are male and they have an average of 3.3 properties. Their average household income is €653,000 and their average total net worth is €4.5million. They have an average disposable monthly income of €8,800. Centurion Magazine has been published since 2001 and has a circulation in Europe and the Middle East of 44,100, in Asia of 13,900 and in Australia of 6,000.[9]