Canarian Spanish (Spanish: español de Canarias, el habla canaria, or dialecto canario) is a variant of standard Spanish spoken in the Canary Islands by the Canarian people, and in the southeastern section of Louisiana in Isleño communities that emigrated to the Americas as early as the 18th century. The variant is very similar to the Andalusian Spanish variety spoken in Andalusia and in much of southern Spain and (especially) to Caribbean Spanish because of Canarian emigration to the Caribbean in earlier times. Canarian Spanish, therefore, heavily influenced the development of Caribbean Spanish. The Spanish-speaking Caribbean islands were originally largely settled by colonists from Andalusia, so the dialects of the Caribbean islands were already quite close to Canarian speech. In the Caribbean, Canarian speech patterns were never regarded as foreign or overly distinct.[1]

The incorporation of the Canary Islands into the Crown of Castile began with Enrique III and ended with the Catholic Monarchs. The expeditions for their conquest started off mainly from ports of Andalusia and is the reason why the Andalusians predominated in the Canaries. There was also an important colonizing contingent coming from Portugal in the early conquest of the Canaries, along with the Andalusians and the Castilians from mainland Spain. In earlier times, Portuguese settled alongside the Spanish in the north of La Palma, but died off or were absorbed by the Spanish. The population that inhabited the islands before the conquest, the Guanches, spoke a series of Berber dialects, often referred to by the insular term, amazigh. After the conquest, a cultural process took place rapidly and intensely, with the native language disappearing almost completely in the archipelago. Surviving are some names of plants and animals, terms related to the cattle ranch, and numerous island placenames.[2]

Due to their geographic situation, the Canary Islands have received much outside influence, causing drastic cultural changes, including linguistic ones. Canarian speech influenced the development of the Spanish spoken in Cuba, Puerto Rico, and the Dominican Republic, as thousands of Canarians emigrated to those islands during the colonial period. Cuban Spanish and Puerto Rican Spanish are strikingly similar to Canarian Spanish. When visiting Tenerife or Las Palmas, Cubans and Puerto Ricans are usually taken at first hearing for fellow-Canarians from a distant part of the Canary archipelago. Venezuelans also speak similarly.[citation needed]

In the U.S. state of Louisiana, there is a large community of Canary Islander descendants east of New Orleans called St. Bernard Parish; members of this community continue to speak the Canarian dialect of Spanish.

The Canarian vocabulary displays several influences, including archaisms from the Castilian of the time of the conquest, such as apopar (" to flatter"). There is also a notable influence from the Guanche language, especially in the toponymy where words of Guanche origin have become nativized by the Spanish settlers. In addition, many Canarian names come from the Guanche language, such as Gara, Acerina, Beneharo, Jonay, Tanausú, Chaxiraxi, Ayoze and Yaiza. 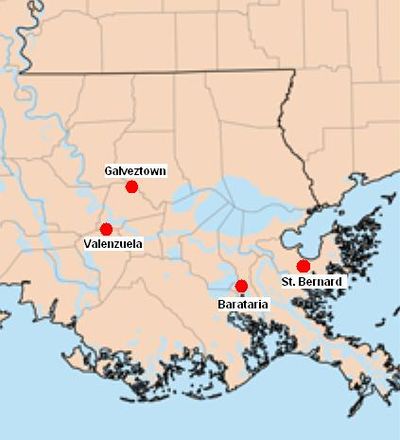 The four Isleño settlements in Louisiana, St. Bernard being the largest of the four

The phonology of the Isleños can be linked diachronically to the Spanish dialects of the Canary Islands, Cuba, Puerto Rico, the Dominican Republic, and ultimately to Andalusía in Spain. For example, the aspiration of syllable-final /s/ is a salient characteristic of the Canary Islands and the Caribbean and can also be found in Andalusian Spanish as is the assimilation of /r/ to the /l/ of a following enclitic pronoun. Isleño phonology has other phonetic variations which link it to the Canary Islands and Caribbean dialects: syllable-final /r/ becoming [h], as in [ˈpwehta] for puerta ('door'), and the deletion of /d/ between vowels and word-finally as in [eŋkaenˈao] for encadenado ('padlocked') and [uhˈte] for usted ('you').

The phonetic features of Isleño show their ancestry to Canarian Spanish, Caribbean Spanish, and Andalusian speech.