The Webster Parish Library is located in the Minden Historic District. To the right is the library annex, which was the previous library proper. Prior to 1965, the annex had been the J.G. Ferguson home.

The pioner Germantown Colony and Museum is located off Louisiana Highway 531 in Webster Parish.

The Dorcheat Historical Association Museum, which contains exhibits from Webster Parish, is located at 116 Pearl Street in Minden.

Webster Parish (French: Paroisse de Webster) is a parish located in the U.S. state of Louisiana. The seat of the parish is Minden. In 2010, its population was 41,207.

Among the first settlers in the parish was Newett Drew, a native of Virginia, who about 1818 established a grist mill at the former Overton community near Minden. His son, Richard Maxwell Drew was born in Overton and served as a district judge state representative prior to his death in 1850 at the age of twenty-eight. R. M. Drew's descendants held judicial or legislative positions in Webster Parish as well, Richard Cleveland Drew, Harmon Caldwell Drew, R. Harmon Drew, Sr., and Harmon Drew, Jr.[1]

The parish is named for 19th-century American statesman Daniel Webster of Massachusetts and New Hampshire. It was created on February 27, 1871[2] from lands formerly belonging to Bienville, Bossier, and Claiborne parishes. 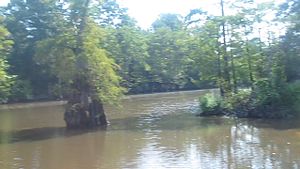 Once navigable through Lake Bistineau to Minden, Dorcheat Bayou, shown here in Dixie Inn, is a popular fishing area with scenic beauty in many places. 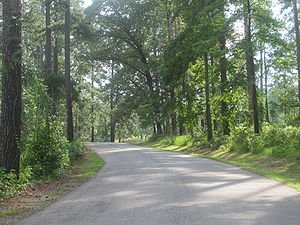 The existing Webster Parish Court House in Minden, built at a cost of $876,000,[3] was dedicated on May 1, 1953, with Governor Robert F. Kennon, who was reared in Minden and formerly served as its mayor, as the featured speaker.[4] Planning on the courthouse began in 1950, when it was determined that the previous structure had become obsolete.[5]

At the time of its establishment in 1904, the previous courthouse, built at a cost of $45,000, was said to have "rivaled any other in north Louisiana for its graceful, domed architectural style and marbled hallways."[6] A modern multi-level jail was added to that courthouse in 1906 at a cost of $16,000. The new jail enabled constituents coming to the sheriff's tax office to avoid passing through the jail.[6]

From 1896 to 1900, Thomas Wafer Fuller of Minden, a descendant of a prominent area family, served as the state senator from Webster and the surrounding parishes of Bossier and Bienville. He was also a newspaper publisher, twice the owner of the former Webster Signal. From 1908 until his death in 1920, he was the second school superintendent in Webster Parish.[7]

From 1933 to 1980, the office of Webster Parish sheriff, who also holds the title of chief parish tax collector, was filled by only three persons, all Democrats, from two political families. Oscar Henry Haynes, Sr. (1888–1969), held the position from 1933–1952 and was a deputy sheriff for the five years prior to his becoming sheriff. His son, O. H. Haynes, Jr., a 1939 graduate of Minden High School, served from 1964-1980. Like his father, Haynes, Jr., had been a deputy. He then served for eight years as supervisor of the state driver's license office in Minden, and he was the Exxon distributor in Webster Parish for some four decades. Haynes, Jr., was the father of Louisiana State University football star, Fred Haynes (1946–2006). The Hayneses are interred at the historic Minden Cemetery.

Since 1992, Webster Parish has been represented in the Louisiana House of Representatives by a member of the Doerge family. Democrat Everett Doerge, a retired educator and native of Minden, unseated the short-term Republican incumbent Eugene S. Eason and held the seat until his death in 1998. His widow, Jean M. Doerge, also a former educator, a Democrat, and a native of Natchitoches Parish, won the special election as his successor. She has since been reelected three times, twice without opposition but is term-limited in 2011. 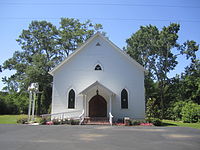 The Yellow Pine Christian Church, formerly known as Union Church, located south of Sibley, Louisiana, was established in 1902. It has been added to the National Register of Historic Places. 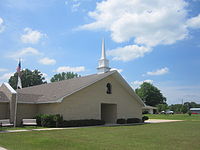 Whispering Pines Missionary Baptist Church is located north of Dixie Inn off U.S. Highway 371 next to a stand of pine trees.