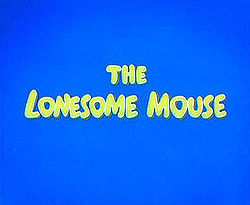 'The Lonesome Mouse' is a 1943 one-reel and is the 10th "" short. This is notable for being the first speaking role of the cat and mouse duo. It was created and released in 1943, and directed by and and produced by . The animators of the cartoon were not credited (typically for early MGM shorts), and this was the last instance in a "Tom and Jerry" cartoon that this happened. All future Tom and Jerry theatrical shorts credited the animators. This cartoon is animated by Kenneth Muse, George Gordon, Jack Zander, Irven Spence, and Pete Burness.

The cartoon opens with Tom taking a nap by the fireplace. Above him is Jerry, who drops a vase on top of his head. This crashing vase brings out , who says, "Thomas! You no good cat, that's sabotage. Out you go!" Mammy throws Tom out of the house and into the yard as punishment. Jerry teases Tom from inside, puts a "For Rent" sign outside his mouse hole, dances in Tom's milk bowl, makes Tom's picture on his bed look like , and rips a piece of Tom's bed sheets. Jerry is having a lot of fun for the first few hours without Tom, but soon becomes bored. Then a voice is heard asking, "You never thought you'd miss that cat, did ya?" Jerry shakes his head. "Feelin' kind of ?" Jerry nods his head. "Look at him. You can't live with him, but there's no fun without him. You know, you could get that guy back in here though, if you really wanted to. Couldn't you?" Jerry thinks about it for a second and then smiles.

Tom is sitting outside the house feeling sorry for himself and he even slaps himself. Jerry whistles at him and waves a white handkerchief. This causes a small revenge-driven chase, but Jerry waves the handkerchief again and whispers into Tom's ear: "Hey, you want to get back in the house, don't ya?" Tom answers, "Yeah". Jerry then whispers a plan into Tom's ear and Tom agrees.

Mammy is shown doing her dishes in the kitchen and singing a song. Jerry tries to get her attention by tugging at her socks and fails. She continues working until the mouse pulls and snaps her sock. Jerry makes faces at her and she climbs on a stool, frightened. Jerry continues by trying to shake her off the stool. Jerry ends up shaking off hairpins, a ring, a razor, a pair of dice, a set of false teeth, buttons, and then Mammy's dress, which the maid promptly pulls back up.

Jerry then grabs the razor and cuts the leg off the stool. Mammy falls down with a big crash and calls to Tom: "Thomas, get in here and save me!" Jerry runs away and hides behind a curtain with Tom behind. Fighting sounds are heard, but it is then revealed that Tom and Jerry are playing pattycake. Jerry emerges from the fake fight and runs back into the kitchen. The mouse turns on the burner underneath Mammy, causing her to jump to the ceiling. Jerry runs past the refrigerator and as Tom runs by, he rips a drumstick off of a chicken. He chases Jerry behind a wall with the drumstick in his hands (in an attempt to make Mammy believe he is attempting to smash Jerry with it), and together they take turns eating it. The fake chase continues with Jerry running into the cupboard and choking the cat. Then a lot of banging sounds come out, but it's just Tom and Jerry using the pots and pans as a drum set. They come out of the cupboard and stage a sword fight with a knife and a fork as weapons. Mammy is hiding under the counter, trembling, and she gets stuck by Tom (several times), and Jerry once, to punctuate his point. The duo run into another cupboard and Tom pours ketchup on Jerry's head. Tom then grabs a meat cleaver and starts to chop at Jerry. Tom ends up chopping the leg of a table, the bottom of a curtain, slicing a table in half, and cutting an apple on top of Jerry's head in half. Jerry notices that the last cut was pretty close to his head, and during a stop in the chase he asks Tom: "We're still kiddin', ain't we"?" Tom replies, "Sure"," and the chase returns to staged mode. Tom chases Jerry around Mammy, who is standing on a chair holding a broom. Mammy shouts out "Chase him in here, Thomas!" and ends up hitting the cat three times before Tom takes the broom and breaks it over his knee. Jerry then runs under the carpet and Mammy tries to swat the mouse. Jerry escapes and Tom puts a tomato under the carpet, traps it and pretends to Mammy that this is Jerry. Mammy says, "Hold him down Thomas! Don't let him get away!" and hits the tomato, thinking it's Jerry. She asks Tom "Did I get him?" and he looks under the carpet. He then reacts as if it's the worst thing he's ever seen, laying down flowers and crying. Tom even blows his nose in Mammy's apron.

Tom is then shown with a napkin around his neck ready to receive his reward for taking care of Jerry: A lemon meringue pie. Mammy says, "Yes, Thomas. You are a hero. Here's a reward for taking care of that mouse. Boy you sure are a mouse catcher!" " Jerry shows up with a napkin around his neck as well. Jerry takes a small bite of the pie and is just about to dive in and enjoy it, but Tom pulls the pie away for himself. He pushes Jerry away and snaps his fingers at him. Tom is just about to enjoy the entire pie, but Jerry kicks him and Tom lands face first into it. Jerry, angry at this turn of attitude, walks away while muttering: "Why that dirty, double crossing, good for nothing, two timing..."