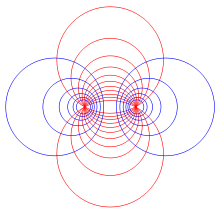 A linear system of divisors algebraicizes the classic geometric notion of a family of curves, as in the Apollonian circles.

These arose first in the form of a linear system of algebraic curves in the projective plane. It assumed a more general form, through gradual generalisation, so that one could speak of linear equivalence of divisors D on a general algebraic variety V.

Definition by means of functions

Given the fundamental idea of a rational function on a general variety V, or in other words of a function f in the function field of V, divisors D and E are linearly equivalent if

where (f) denotes the divisor of zeroes and poles of the function f.

A complete linear system on V is defined as the set of all effective divisors linearly equivalent to some given divisor D. It is denoted |D|. Let L(D) be the line bundle associated to D. It can be proved that |D| corresponds bijectively to

[1] and is therefore a projective space.

is then a projective subspace of a complete linear system, so it corresponds to a vector subspace W of

The dimension of the linear system

is its dimension as a projective space. Hence

For more details on this topic, see Base locus.

If all divisors in the system share a common divisor, this is referred to as the base locus of the linear system. Geometrically, this corresponds to the common intersection of the varieties. Linear systems may or may not have a base locus – for example, the pencil of affine lines x = a has no common intersection, but given two (nondegenerate) conics in the complex projective plane, they intersect in four points (counting with multiplicity) and thus the pencil they define has these points as base locus.

For example, the conic sections in the projective plane form a linear system of dimension five, as one sees by counting the constants in the degree two equations. The condition to pass through a given point P imposes a single linear condition, so that conics C through P form a linear system of dimension 4. Other types of condition that are of interest include tangency to a given line L.

with λ and μ unknown scalars, not both zero. Here C and C′ are given conics. Abstractly we can say that this is a projective line in the space of all conics, on which we take

as homogeneous coordinates. Geometrically we notice that any point Q common to C and C′ is also on each of the conics of the linear system. According to Bézout's theorem C and C′ will intersect in four points (if counted correctly). Assuming these are in general position, i.e. four distinct intersections, we get another interpretation of the linear system as the conics passing through the four given points (note that the codimension four here matches the dimension, one, in the five-dimensional space of conics). Note that of these conics, exactly three are degenerate, each consisting of a pair of lines, corresponding to the

ways of choosing 2 pairs of points from 4 points (counting via the multinomial coefficient).

A striking application of such a family is in (Faucette 1996) which gives a geometric solution to a quartic equation by considering the pencil of conics through the four roots of the quartic, and identifying the three degenerate conics with the three roots of the resolvent cubic.

For example, given the four points

the pencil of conics through them can be parameterized as ax2 + (1 − a)y2 = 1, which are the affine combinations of the equations x2 = 1 and y2 = 1, corresponding to the parallel vertical lines and horizontal lines; this yields degenerate conics at the standard points of

) interchanges x and y, yielding the following pencil; in all cases the center is at the origin:

(dividing by a and taking the limit as

In the terminology of (Levy 1964), this is a Type I linear system of conics, and is animated in the linked video.

The Cayley–Bacharach theorem is a property of a pencil of cubics, which states that the base locus satisfies an "8 implies 9" property: any cubic containing 8 of the points necessarily contains the 9th.

In general linear systems became a basic tool of birational geometry as practised by the Italian school of algebraic geometry. The technical demands became quite stringent; later developments clarified a number of issues. The computation of the relevant dimensions — the Riemann-Roch problem as it can be called — can be better phrased in terms of homological algebra. The effect of working on varieties with singular points is to show up a difference between Weil divisors (in the free abelian group generated by codimension-one subvarieties), and Cartier divisors coming from sections of invertible sheaves.

Linear systems are still at the heart of contemporary algebraic geometry; but they are typically introduced by means of the ample line bundle language. That is, the language of sheaf theory is considered the most natural starting point, at least to learn the theory. In those terms, divisors D (Cartier divisors, importantly) correspond to line bundles, and linear equivalence of two divisors means that the corresponding line bundles are isomorphic.