Wales in the Early Middle Ages

Wales in the Early Middle Ages 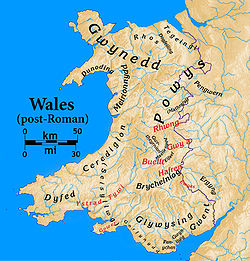 The history of Wales in the early Middle Ages is sketchy, as there is very little written history from the period. Nonetheless, some information may be gleaned from archaeological evidence and what documentary history does exist.

It is established to some extent that the Irish had settled in Wales by some time in the fifth century, though little is known of the extent of military action; the many hill-forts of Wales saw some reoccupation during this time, and it has been conjectured that the purpose for this was defensive, though against whom is unknown.[1]

British kingdoms outside Wales which succumbed to Anglo-Saxon rule during the Anglo-Saxon period include much of Dumnonia, Cornwall, and Rheged. Kingdoms that were displaced or assimilated into Anglo-Saxon kingdoms include Bryneich and Gododdin into Bernicia and Ebrauc into Deira.

From the mid 5th century, the Anglo-Saxon invasion of Britain pushed Brythonic people and culture westward, according to Bede under the rule of the legendary Vortigern, who is said to have employed Germanic mercenaries against the Picts, among whom were the brothers Hengest and Horsa, legendary founders of the Anglo-Saxon Kingdom of Kent.

Power waxed and waned in certain regions for centuries: The south-east of Wales saw an increase in power in the seventh century, as a series of kings sprung up and exerted power over minor kingdoms, expanding to some degree, though not always by military might, and quite often indeed by political manoeuvring such as marrying into pre-existing dynasties.

Of the kingdoms mentioned above, Gwynedd and Powys emerged as the most stable by the 8th to 9th century, and remained independent until their unification in the Principality of Wales in 1216.

End of the first millennium 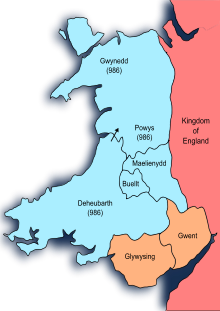 Maredudd ab Owain's territory as of 986 included most of Wales (with the exception of Glywysing and Gwent, later combined into Morgannwg)

By the later centuries of the first millennium, according to Wendy Davies, a clearer pattern of development is seen, and the expansion and subsequent domination of the Welsh Kingdom of Gwynedd, a province of north-west Wales, is fairly well-established. The aforementioned kingdoms of the south-east seem to have remained relatively isolated until the eleventh century (102).

Throughout this period, the English Saxons exerted some influence over Wales, if only by settlement at times. In the sixth century, the Saxons appear to have attacked Wales; however, "relations between the English and the British of Wales were not entirely hostile" after these attacks (W. Davies, 113). For some 200 years starting in the seventh century, from the establishment of Mercia, there were sporadic raids and skirmishes in both Wales and England, perpetrated by both powers.

With the later establishment of a legitimate English monarchy, the southern Welsh kingdoms sought out King Alfred’s protection against the kings of Gwynedd, and "they thus accepted Alfred’s lordship … in so doing" (114). Throughout the tenth century, Davies says, "ravagings went on," in Gwynedd, the south-east, in Dyfed, and often perpetrated by Mercian kings, all this despite courtly appearances of friendship. Further, some Welsh kings had the foresight to turn the English to their own purposes, forging alliances against other Welsh kings, using the English as a source of soldiers and tactics, thus "end[ing] the hard lines of cultural separation" between England and Wales (115).