Mount Pirongia is an extinct volcano located in the Waikato region of New Zealand's North Island. It rises to 959 metres [1] and is the highest peak in the Waikato region. It was active in the late Pliocene and early Pleistocene times. Pirongia's many peaks are basaltic cones created by successive volcanic eruptions about 2.5 million years ago [2].

Maori people have a strong connection to Mount Pirongia. It was first named "Pirongia te aroaro o Kahu" the scented pathway of Kahu [3] by a Tohunga of the Tainui canoe to honour his wife. To preserve the heritage of Mount Pirongia Pirongia Te Aroaro o Kahu Restoration Society Inc was formed in 2002 as a result of deep-seated community interest in its ecological restoration.[4] 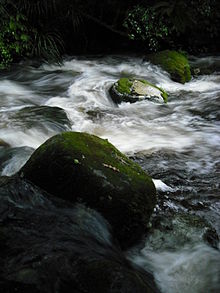 Among variety of plants and wildlife, Wood Rose or Dactylanthus taylorii, a rare and endangered parasitic flowering plant, can be found on the ridges of Mount Pirongia. Variety of podocarps are found at lower altitudes: rimu, totara, tawa and tree ferns. At higher altitudes the forest changes. Hardy plants like horopito and kamahi grow on exposed ridges and near the summit there are mountain flax, coprosmas and ferns. Common birds are: fantails, kingfishers, kereru, tui, kereru, New Zealand falcons. Botanically, Mount Pirongia is also interesting area as it marks the transition between the warm-loving kauri forest of the north and the beech and podocarp-beech forest on the south. The park's latitude is the naturally occurring southern limit for species such as kauri and mangeao [5].

There are numerous tracks to the summit [6]. Mahaukura - Tirohanga Circuit (8–11 hours) is a longer distance but with a gradual climb. This track is well signposted with bright orange plastic markers, but considered difficult. It leads through many steep sections but gives excellent views from Wharauroa lookout, Mahaukura peak (899 m) and Tirohanga peak. In winter and after rain the track becomes muddy and slippery. There are many narrow sections with a tangle of tree roots and rocks. There is a lookout platform on Pirongia summit from where it is possible to spot Mount Taranaki summit and Mount Ruapehu summit on a clear day. On the west side there are Kawhia and Raglan harbours.