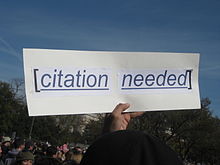 Broadly, a citation is a reference to a published or unpublished source (not always the original source). More precisely, a citation is an abbreviated alphanumeric expression (e.g. [Newell84]) embedded in the body of an intellectual work that denotes an entry in the bibliographic references section of the work for the purpose of acknowledging the relevance of the works of others to the topic of discussion at the spot where the citation appears. Generally the combination of both the in-body citation and the bibliographic entry constitutes what is commonly thought of as a citation (whereas bibliographic entries by themselves are not).

A prime purpose of a citation is intellectual honesty: to attribute prior or unoriginal work and ideas to the correct sources, and to allow the reader to determine independently whether the referenced material supports the author's argument in the claimed way.

The forms of citations generally subscribe to one of the generally accepted citations systems, such as the Oxford,[1] Harvard, MLA, American Sociological Association (ASA), American Psychological Association (APA), and other citations systems, as their syntactic conventions are widely known and easily interpreted by readers. Each of these citation systems has its respective advantages and disadvantages relative to the trade-offs of being informative (but not too disruptive) and thus should be chosen relative to the needs of the type of publication being crafted. Editors will often specify the citation system to use.

Bibliographies, and other list-like compilations of references, are generally not considered citations because they do not fulfill the true spirit of the term: deliberate acknowledgment by other authors of the priority of one's ideas.[citation needed]

Citation content can vary depending on the type of source and may include:

Along with information such as author(s), date of publication, title and page numbers, citations may also include unique identifiers depending on the type of work being referred to.

Note systems involve the use of sequential numbers in the text which refer to either footnotes (notes at the end of the page) or endnotes (a note on a separate page at the end of the paper) which gives the source detail. The notes system may or may not require a full bibliography, depending on whether the writer has used a full note form or a shortened note form.

For example, an excerpt from the text of a paper using a notes system without a full bibliography could look like this:

"The five stages of grief are denial, anger, bargaining, depression, and acceptance."1

The note, located either at the foot of the page (footnote) or at the end of the paper (endnote) would look like this:

In a paper which contains a full bibliography, the shortened note could look like this:

and the bibliography entry, which would be required with a shortened note, would look like this:

In the humanities, many authors use footnotes or endnotes to supply anecdotal information. In this way, what looks like a citation is actually supplementary material, or suggestions for further reading.[9]

Parenthetical referencing also known as Harvard referencing where full or partial, in-text citations are enclosed within parentheses and embedded in the paragraph, as opposed to the footnote style.

An example of a parenthetical reference would be:

This section may be known as:

Citation styles can be broadly divided into styles common to the Humanities and the Sciences, though there is considerable overlap. Some style guides, such as the Chicago Manual of Style, are quite flexible and cover both parenthetical and note citation systems.[8] Others, such as MLA and APA styles, specify formats within the context of a single citation system.[7] These may be referred to as citation formats as well as citation styles.[10][11][12] The various guides thus specify order of appearance, for example, of publication date, title, and page numbers following the author name, in addition to conventions of punctuation, use of italics, emphasis, parenthesis, quotation marks, etc., particular to their style.

A number of organizations have created styles to fit their needs; consequently, a number of different guides exist. Individual publishers often have their own in-house variations as well, and some works are so long-established as to have their own citation methods too: Stephanus pagination for Plato; Bekker numbers for Aristotle; citing the Bible by book, chapter and verse; or Shakespeare notation by play, act and scene.

Some examples of style guides include:

In some areas of the Humanities, footnotes are used exclusively for references, and their use for conventional footnotes (explanations or examples) is avoided. In these areas, the term "footnote" is actually used as a synonym for "reference", and care must be taken by editors and typesetters to ensure that they understand how the term is being used by their authors.

In their research on footnotes in scholarly journals in the field of communication, Michael Bugeja and Daniela V. Dimitrova have found that citations to online sources have a rate of decay (as cited pages are taken down), which they call a "half-life," that renders footnotes in those journals less useful for scholarship over time.[24]