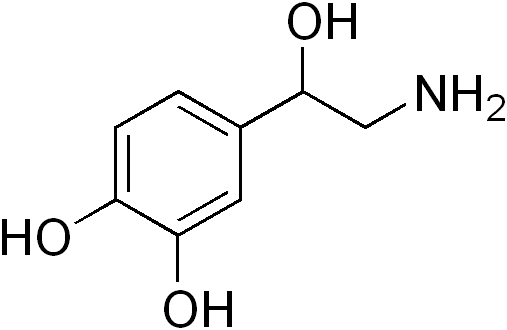 caption3= Sympathomimetic drugs are substances that mimic the effects of the (adrenaline), (noradrenaline), and/or . Such drugs are used to treat , low , or even delay , among other things.

These drugs act at the sympathetic terminal,

Direct stimulation of the α- and β-s can produce sympathomimetic effects. is a very commonly used direct-acting β2-agonist. Other examples include , , and .

Stimulation of the by dopaminergic agonists such as is used intravenously to treat .

Classical sympathomimetic drugs are (including ), and , which act by blocking and reversing (NET) activity. NET is a transport protein expressed on the surface of some cells that clears noradrenaline and adrenaline from the and into cells, terminating the signaling effects.

Norepinephrine is synthesized by the body into epinephrine, causing stimulation. Thus, all sympathomimetic amines fall into the larger group of s (see chart). Many of these stimulants have therepeutic use and abuse potential, can induce , and possibly .

"" and "sympathomimetic" are similar, but not identical. For example, both cause , but parasympatholytics reduce accommodation () while sympathomimetics do not.