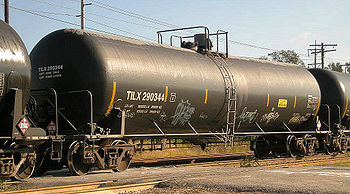 Tank cars are specialized pieces of equipment. As an example, the interior of the car may be lined with a material, such as glass, or other specialized coatings to isolate the tank contents from the tank shell. Care is taken to ensure that tank contents are compatible with tank construction.

As a result of this specialization, tank cars have generally been "one-way" cars. Other cars, like boxcars, can easily be reloaded with other goods for the return trip. Combinations of the two types were attempted, such as boxcars with fluid tanks slung beneath the floors. While the car could certainly carry a load both directions, the limited tank size made this unsuccessful.

A large percentage of tank cars are owned by companies serviced by railroads instead of the railroads themselves. This can be verified by examining the reporting marks on the cars. These marks invariably end in X, meaning that the owner is not a common carrier.

Within the rail industry, tank cars are grouped by their type and not by the cargo carried. Food service tank cars may be lined with stainless steel, glass, or plastic. Tank cars carrying dangerous goods are generally made of different types of steel, depending on the intended cargo and operating pressure. They may also be lined with rubber or coated with specialized coatings for tank protection or product purity purpose. The tank heads are also stronger to prevent ruptures during accidents. The whale belly type is giving way to higher capacity, yet standard-width cars.

All tank cars undergo periodic inspection for damage and corrosion. Pressure relief valves are inspected at every loading. Pressurized cars are pressure-tested regularly to insure the integrity of the tank.

All tank cars operating throughout North America today feature "double shelf" AAR type "F" couplers that prevent disengaging in event of an accident or derailment. This all but eliminates the chance of couplers puncturing adjacent tank cars.

Insulated cars (which may also incorporate heating or refrigeration systems) are used when the contents must be kept at a certain temperature. For example, the Linde tank car depicted below carries liquefied argon. Cars designed for multiple commodities are constructed of two or more tanks (compartments). Each compartment must have separate fittings. The lower capacity and added complexity of multicompartment cars means that they make up a small percentage of the tank car inventory.

Outside of North America, tank cars are also known as tank wagons or tanker wagons.

A milk car is a specialized type of tank car designed to carry raw milk between farms, creameries, and processing plants.

Milk is now commonly chilled before loading, and transported in a glass-lined tank car. Such tank cars are often placarded 'Food service use only'.

Tank cars of this type are designed to carry cryogenic liquid Hydrogen (LH2). North American cars are classified as DOT113, AAR204W, and AAR204XT[1]

A pickle car was a specialized type of tank car designed to carry pickles. This car consisted of several wooden or metal vats (typically three or four) and was often roofed. Pickles which are preserved in salt brine were loaded through hatches in the roof.

A tanktainer, also known as a tank container, is a specialized type of container designed to carry bulk liquids, such as liquid hydrogen, gases and other dangerous goods as well as non dangerous bulk liquids on standard flatcars, well cars or semi-trailers in intermodal freight transport. The tank is held within a box-shaped frame the same size and shape as an intermodal container.

A torpedo car or bottle car is a type of railroad car used in steel mills to haul molten pig iron from the blast furnace to begin the process of primary steelmaking.

The thermally-insulated vessel is mounted on trunnions, and designed to endure extremely high temperatures, as well as keeping the metal in a molten state over extended periods of time. The vessel can be pivoted along its longitudinal axis to empty the pig iron into a furnace (such as a basic oxygen furnace) or crucible.

A vinegar car is a specialized type of tank car designed to transport vinegar. The largest such car built was built by Morrison Railway Supply Corporation in 1968. The car's underframe included all of modern facets of freight car design including roller bearing trucks and cushioning devices built by FreightMaster, while the tank that rode on it, made of Douglas Fir, had a capacity of 17,100 US gallons (65 m3; 14,200 imp gal). The car, in what has been called 'the largest wooden tank car ever built', took 18 months to build.

In addition, some types of tank cars have a second end plate visible from the exterior to further avoid end punctures.

It is also preferable if the taps are depressed within the body of the tank so as to present a reduced knock-off hazard during a derailment.[citation needed]