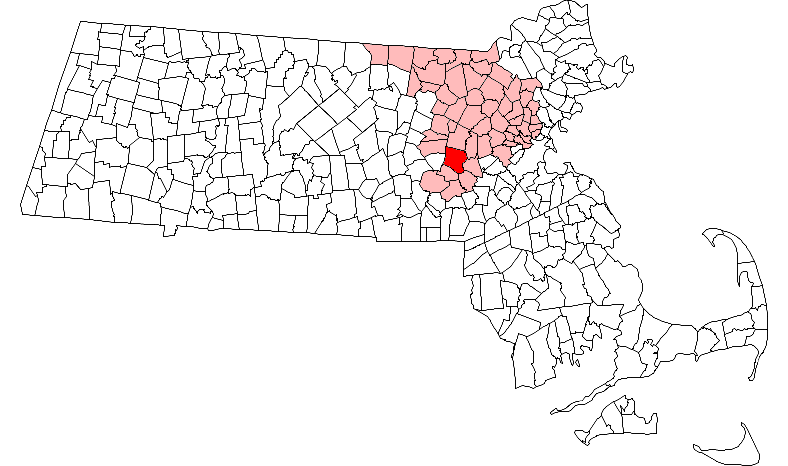 Framingham is a town in Middlesex County, , . The structure of all town governments is based on the same "three legged stool" as the Federal government which has the executive (president), legislative (congress) and judicial (supreme court) branches. In Framingham a Strong Town Manager (see below) and governs the town as executive, with a representative serving as the . The five member Board of Selectmen is officially the judicial branch, but in fact is responsible for policy decisions that have no impact on the town that exceed the three years of their elected office.

A Strong oversees the day to day operations of the town, acting as a , hired by and reporting to the Board of Selectmen. The office of the Strong Town Manager does not have any executive powers but is responsible for all hiring and firing. Before Framingham had a Strong Town Manager, it had a Town Manager (without hiring and firing powers), and before that, Framingham had an Executive Administrator who operated on a daily basis with direction supplied by, what was then, a three man Board of Selectmen.

Framingham is divided into 18 Precincts [ [http://www.framinghamma.gov/web/precinct%20info/precincts_toc.htm Framingham Precinct Information] ] with 12 elected Town Meeting Members per precinct. Term of office is three years. The town is the largest by population with a town meeting form of in the . [ [http://www.framinghamma.gov/web/Government/About_Town_Government.htm About Town Government] ] In addition to acting as the legislative branch, Town Meeting is also the Authority and has the power to define zoning districts and is required to approve of Land Takings.

These Standing Committees are responsible for reviewing and recommending disposition to the Town Meeting on all Articles on a Town Meeting Warrant which may be of interest to those committees.

Besides the appointed town committees and boards, there are seven boards that are directly elected by the town's voters

Like all government, Framingham has a system of Boards, Commissions and Committees. Almost all of the appointments are made by either the Board of Selectmen or by the Town Moderator.

The Town Moderator is a one year elected position, whose job it is to run the floor of Town Meeting. In addition, the Moderator is responsible for making appointments to six Committees:
* Government Study Committee
* Finance Committee
* Real Property Committee
* Personnel Board
* Capital Budget Committee
* Technology Advisory Committee

In addition, a ten-man committee created by Town Meeting, called the PILOT Committee (for Payment In Lieu Of Taxes) [ [http://www.framinghamma.gov/web/Government/PILOT_committee.htm Framingham PILOT Committee] ] was half appointed by the Board of Selectmen and half by the Town Moderator. Their task was to investigate the economic impact of social service agencies on Framingham and the comparative impact on other towns.

Besides the appointed Boards and Commissions, there is also a five person Planning Board [ [http://www.framinghamma.gov/planning_board/Default.htm Framingham Planning Board] ] which is responsible for reviewing both residential and commercial development plans. Their responsibility is to direct projects in such a way as to optimize their overall aestethic value while at the same time minimizing impact. The Planning Board is also responsible for periodic management of the update process for the Town's Master Plan.

Mission Statement: The mission of the Framingham Public Schools, a system that understands and values our diversity, is to educate each student to learn and live productively as a critically thinking, responsible citizen in a multicultural, democratic society by providing academically challenging instructional programs taught by a highly qualified and diverse staff and supported by comprehensive services in partnership with our entire community [ [http://www.framingham.k12.ma.us/mission.htm FSD Mission Statement] ] .

The Framingham School Department can trace its roots back to when the town hired its first school master, Deacon Joshua Hemenway. While Framingham had its first school master, it not get it own public school building until . The first high school, the Framingham Academy, opened its doors in ; however this school was eventually closed due financing issues and the legality of the town providing funds for a private school. The first town operated high school opened in and has been in operation continuously in numerous location throughout the town. [ [http://www.framingham.com/history/histtime.htm Historic time line of Framingham] on Framingham.com]

The school system has grown to a total of thirteen s: a preschool program, eight elementary schools, three middles schools and the high school. The town also home to a regional vocational high school and the Christa McAuliffe regional [ [http://www.framingham.com/edu/publicschools.htm School listings on Framingham.com] ] .

The Administrative Offices of the School Department is at the King Administrative Building on 454 Water Street with the Superintendent's office at 14 Vernon St.

The Framingham Fire Department employs 140 firefighters, 17 lieutenants, 8 captains, and 7 deputy chiefs. 5 engines, 2 ladders, and 1 heavy rescue protect the town from 5 stations. Although the ambulance is privately contracted, the crew members assigned to the ALS trucks that cover the town, must meet and be approved by the fire chief before being allowed to work in the system.

A thirty member Tunnel Rescue Team, trained by the Boston Fire Department, is specially prepared to handle any emergency that may arise along and in the 's 11 mile (MWWST) and the Hultman Aqueducts. The department also has a sixteen member Dive Rescue Unit and a seven member Hazardous Materials Unit, two of whom assist in running the State Hazardous Materials Program. [ [http://www.framingham.com/townhall/fire/index.htm Framingham Fire Department on Framingham.com] ]

The FFD Headquarters is located with Station 3 at 10 Loring Drive, while the Framingham Fire Dispatch Center is operated out of Station 1 on Route 9. [ [http://www.framinghamfire.org/Stations.htm Framingham Fire Stations] ]

The town first recognized the need for an organized police force in 1871, when the first actual police facility being built in town. It was built on Watson Place in Saxonville, on the site where one of the town's current fire station exists today. Individuals who served in a police capacity for the Town of Framingham from 1870 to 1891 performed basically the same duties throughout this time frame. An officer from 1870 could easily perform the activities of his 1891 counterpart with no additional training. The only difference was a very slight pay increase and a noticeable increase in level of activity. Local police officers during this time period received no formal training.

The current FPD Headquarters is located in the former Framingham Armory Building on Union Ave., next the Memorial Building. Renovated in the late 1990s, the building replaced the former facility at the same location which was operationally and functionally sub-standard. The current structure is a state of the art building with training and recreational facilities, holding cells and dispatch center.

Motto: "Managing your investment in the Public infrastructure"

The Framingham Department of Public Works as it operates to day was shaped by local politician and DPW chair . The DPW operates out of a facility named for Mr. Colonna located on Western Ave adjacent to MCI Framingham.

* : The main headquarters of the State Police is located on Route 9, adjacent to the MEMA Bunker. Until , this facility was the Division of State Police's Training Academy, but is now officially known as the Department of State Police General Headquarters.
* (MEMA): The Massachusetts Emergency Management Agency is responsible for inter-agency coordination between Federal, State, local and private resources throughout the Commonwealth during times of disasters and emergencies. Its headquarters are in the former facility on Route 9, west of the Route 126 interchange, that was designed to protect the Massachusetts state government is case of nuclear war with the .
* (DoC) The DoC operates two facilities within Framingham, the Massachusetts Correctional Institute for Women (MCI Framingham) and the South Middlesex Correctional Center (SMCC). MCI Framingham is the primary women's prison in the state, housing all levels of prisoners. SMCC is a "pre-release" facility that is designed to help transition prisoners from incarceration to general life. It has drug treatment programs, and educational programs to help inmates who are going to be released from custody make the transition back in to the general population.
* [http://www.mass.gov/courts/ Massachusetts Trial Court] : The Mass Trial Court has two facilities in Framingham, the Framingham District Court on Concord St. and the Middlesex Juvenile Court Building on Mt. Wayte Av.
* : Masshighway operates a salt and sand shed at the junction of routes 9 and 126, in the route 126 southbound to route 9 eastbound exit ramp loop.
* : The MNG operates a supply and maintenance depot on Concord St., approximately one mile south of route 9. This facility has three buildings, an office/meeting complex that houses local administration facilities and the MNG recruiting center. The other two structures are automotive and equipment maintenance buildings.

* The : The SSA maintains its local claims center in "?" building on Concord St. in Downtown Framingham.
* recruitment center:
* The : The USPS maintains a large sorting center for the town of Framingham and the surrounding towns; the complex also hosts the regional USPS Vehicle Maintenance Facility. This is located at the main post office building on Cochituate Rd. In the town, due to its size and population, was required to implement five . The original 01701 Zip code was re-assigned to North Framingham ( dictated because the main post office, on Route 30 in the Golden Triangle, has to be in the main Zip code), while South Framingham was assigned the new 01702 Zip code. Zip codes 01703, 01704 and 01705 were assigned to the local post office satellite branches in Pinefield/Saxonville, Framingham Center and Downtown, respectively.