A heme () or haem () is a that consists of an atom contained in the center of a large organic ring called a "". Not all porphyrins contain iron, but a substantial fraction of porphyrin-containing s have heme as their prosthetic subunit; these are known as s.

There are several biologically important kinds of heme: 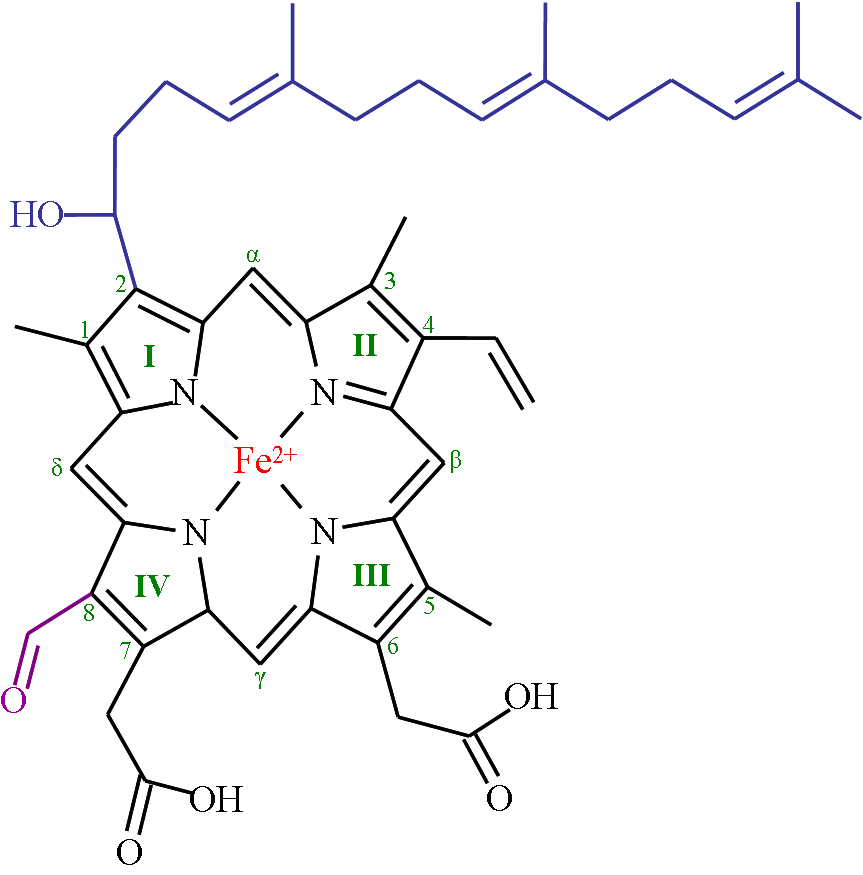 thumb|200px|right|">Heme A [ cite journal | author=Caughey, Winslow S., "et al" | title=Heme A of Cytochrome c Oxidase STRUCTURE AND PROPERTIES: COMPARISONS WITH HEMES B, C, AND S AND DERIVATIVES| journal=J. Biol. Chem.| year=1975| volume=250| issue=19| pages=7602–7622 ] Heme A is synthesized from Heme B. In two sequential reactions a 17-hydroxyethylfarnesyl moiety (blue) is added at the 2-position and an aldehyde (purple) is added at the 8-position. Nomenclature is shown in green.

[ cite journal | author=Hegg, Eric L., "et al" | title=Heme A Synthase Does Not Incorporate Molecular Oxygen into the Formyl Group of Heme A| journal=Biochemistry| year=2004 | volume=43 | issue=27 | pages= 8616–8624 | doi=10.1021/bi049056m] The most common type is ""; other important types include "" and "". Isolated hemes are commonly designated by capital letters while hemes bound to proteins are designated by lower case letters. Cytochrome a refers to the heme A in specific combination with membrane protein forming a portion of .

* "" is the derivative of heme B covalently bound at the active site of . Heme M also contains the two ester bonds at the heme 1- and 5-methyls, much as the other mammalian peroxidases. In addition, a unique ion linkage between the sulfur of a methionyl aminoacid residue and the heme 2-vinyl group is formed, giving this enzyme the unique capability of easily oxidizing and ions. Myeloperoxidase is present in mammalian neutrophils and is responsible for the destruction of invading bacteria and virus. It also synthesizes by "mistake" which is a known mutagenic compound.

* "" is another derivative of heme B, but in which the propionic acid side chain at the carbon of position 6, ring III is bound to this carbon both via the usual C-C bond but also by the carboxyl oxygen, giving heme D a fifth ring and a lactone. Ring III is also hydroxylated at position 5, in a conformation trans to the new lactone group. [ cite journal | author=Timkovich, R., Cork, M.S., Gennis, R.B. and Johnson, P.Y. | title=Proposed Structure of Heme d, a Prostetic Group of Bacterial Terminal Oxidases| journal=Journal of the American Chemical Society| year=1985 | volume=107 | issue=21 | pages= 6069–6075 | doi=10.1021/ja00307a041] Heme D is the site for oxygen reduction to water of many types of bacteria at low oxygen tension.

* "" is related to heme B by the having a group at position 2 in place of the 2-vinyl group. Heme S is found in the hemoglobin of marine worms. The correct structures of heme B and heme S were first elucidated by German chemist .

It has been speculated that the original evolutionary function of was electron transfer in primitive sulfur-based pathways in ancestral before the appearance of molecular oxygen. [ cite journal | author=Hardison, R.| title=The Evolution of Hemoglobin Studies: of a very ancient protein suggest that changes in gene regulation are an important part of the evolutionary story| journal=American Scientist| year=1999 | volume=87 | issue=2 | pages= 126]

Hemoproteins achieve their remarkable functional diversity by modifying the environment of the heme macrocycle within the protein matrix. For example, the ability of to effectively deliver oxygen to tissues is due to specific amino acid residues located near the heme molecule. Hemoglobin binds oxygen in the pulmonary vasculature, where the is high and the pCO2 is low, and releases it in the tissues, where the situations are reversed. This phenomenon is known as the . The molecular mechanism behind this effect is the steric organization of the globin chain; a residue, located adjacent to the heme group, becomes positively charged under acid circumstances, sterically releasing oxygen from the heme group.

"Details of heme synthesis can be found in the article on ."

The enzymatic process that produces heme is properly called synthesis, as all the intermediates are tetrapyrroles that are chemically classified are porphyrins. The process is highly conserved across biology. In humans, this pathway serves almost exclusively to form heme. In other species, it also produces similar substances such as ().

The pathway is initiated by the synthesis of (dALA or δALA) from the and from the (Krebs cycle). The rate-limiting enzyme responsible for this reaction, "ALA synthase", is strictly regulated by intracellular levels and heme concentration. A low-iron level, e.g., in , leads to decreased porphyrin synthesis, which prevents accumulation of the toxic intermediates. This mechanism is of therapeutic importance: infusion of "heme arginate" of "hematin" can abort attacks of in patients with an of this process, by reducing transcription of ALA synthase.

The organs mainly involved in heme synthesis are the and the , although every cell requires heme to function properly. Heme is seen as an intermediate molecule in catabolism of haemoglobin in the process of .

In the first step, heme is converted to by the enzyme (HOXG). is used as the reducing agent, molecular oxygen enters the reaction, carbon monoxide is produced and the iron is released from the molecule as the (Fe3+). HOXG heme --------------> biliverdin + Fe3+ / H+ + NADPH NADP+ O2 CO

In the second reaction, biliverdin is converted to bilirubin by (BVR):

Bilirubin is transported into the liver bound to a protein (), where it is conjugated with to become more water soluble. The reaction is catalyzed by the enzyme UDP-glucuronide transferase (UDPGUTF). UDPGUTF bilirubin + 2 UDP-glucuronate ------------> bilirubin diglucuronide 2 UMP + 2 Pi

This form of bilirubin is excreted from the liver in . The deconjugate and convert bilirubin to s. Some urobilinogen is absorbed by intestinal cells and transported into the kidneys and excreted with urine. The remainder travels down the digestive tract and is excreted as , which is responsible for the color of .

The following genes are part of the chemical pathway for making heme: