Baxter County is a county located in the U.S. state of Arkansas. It is in the northern part of the state, and shares a border with Missouri. It is commonly referred to as the Twin Lakes Area because it is bordered by two of Arkansas' largest lakes, Bull Shoals Lake and Norfork Lake. On its southern border is the Norfork Tailwater and the Buffalo National River.

The county seat is Mountain Home,[1] which is ranked as the 2nd Best Fishing Town in America by Field and Stream magazine and Baxter County today it is primarily known as a retirement and resort destination. Its Big Creek Golf Course has consistently earned 5 star ratings in Golf Digest magazine and is ranked in its top 10 places to play. It has also been rated the number 1 public course in Arkansas for four years in a row.

Baxter County is Arkansas's 66th county, formed on 24 March 1873 and named for Elisha Baxter, the tenth governor of Arkansas.

The Baxter Bulletin weekly newspaper was named in 1973 by the Newspaper Enterprise Association as the "Best Overall Weekly Newspaper in the United States" in the over 10,000-circulation category. At the time it was published by Harold E. Martin and was the largest weekly paper in Arkansas. 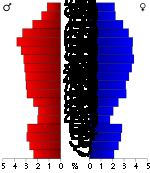 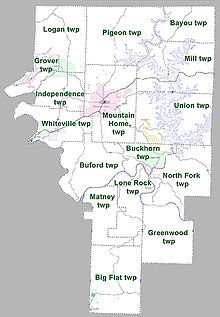 Townships in Baxter County, Arkansas as of 2010

Townships in Arkansas are the divisions of a county. Each township includes unincorporated areas and some may have incorporated towns or cities within part of their space. Townships have limited purposes in modern times. However, the US Census does list Arkansas population based on townships (often referred to as "minor civil divisions"). Townships are also of value for historical purposes in terms of genealogical research. Each town or city is within one or more townships in an Arkansas county based on census maps. The townships of Baxter County are listed below with the town(s) and/or city that are fully or partially inside them listed in parentheses. [8]

Notable residents - past and present 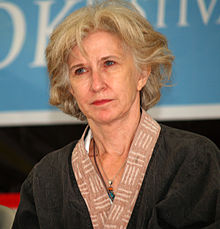