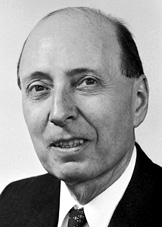 He received the in 1963 "for his contributions to the theory of the atomic nucleus and the elementary particles, particularly through the discovery and application of fundamental symmetry principles". Some contemporaries referred to Wigner as "the Silent Genius" and some even considered him the intellectual equal to , though without his prominence. Wigner is important for having laid the foundation for the theory of symmetries in as well as for his research into atomic nuclei, and for his several theorems.

Wigner was born in , () to a ish family. At age 11, Wigner contracted what his parents believed was . They sent him for six weeks to a sanitarium in the Austrian mountains. During this period, Wigner began to develop an interest in mathematical problems. From 1915 till 1919, concurrently with , Wigner studied at the Fasori Evangélikus Gimnázium where they both greatly benefited from encouragement by the legendary teacher . In 1919, to escape the Communist regime, the family briefly moved to , returning after Kun's downfall. Partly as a reaction to the prominence of Jews in the Kun regime, the family converted to Lutheranism. [Eugene Paul Wigner as told to Andrew Szanton "The Recollections of Eugene P. Wigner" (Plenum, 1992) ISBN 0-306-44326-0 ]

In 1921, Wigner studied chemical engineering at the Technische Hochschule in Berlin (today the ). He also attended the Wednesday afternoon colloquia of the . These colloquia featured such luminaries as , , , , , , and . Wigner also met physicist , who at once became Wigner's closest friend. A third experience in Berlin was formative. Wigner worked at the Kaiser Wilhelm Institute for Physical Chemistry and Electrochemistry (now ), and there met , who became, after László Rátz, Wigner's greatest teacher.

In the late 1920s, Wigner deeply explored the field of . A period at as an assistant to the great mathematician proved a disappointment, as Hilbert was no longer active in his works. Wigner nonetheless studied independently. He laid the foundation for the theory of symmetries in quantum mechanics and in 1927 introduced what is now known as the . [E. Wigner, Zeitschrift f. Physik, vol. 43, pp. 624-652 (1927)] It is safe to state that he and carry the whole responsibility for the introduction of into quantum mechanics (they spread the "Gruppenpest"). See Wigner's 1931 monograph for a survey of his work on group theory. In the late 1930s, he extended his research into atomic nuclei. He developed an important general theory of nuclear reactions (see for instance the ). By 1929, his papers were drawing notice in the physics world. In 1930, recruited Wigner, which was timely as the s soon came to power in Germany. In Princeton in 1934 Wigner introduced his sister Manci to the physicist , whom she married.

In 1936, Princeton did not rehire Wigner, so he moved to the . There he met his first wife, a physics student named Amelia Frank. She died in 1937, leaving Wigner distraught. On , , Wigner became a of the United States. Princeton University shortly invited Wigner back, and he rejoined its faculty in the fall of 1938. Though a professed political amateur, in 1939 and 1940 Wigner played a major role in agitating for the , which developed the first . However, he was by personal preference a pacifist. He later contributed to civil defense in the U.S. In 1946, Wigner accepted a job as director of research and development at Clinton Laboratory (now ) in Oak Ridge, . When this did not work out especially well, Wigner returned to Princeton.

In 1941 Wigner married his second wife, Professor Mary Annette Wheeler, of . Professor Wheeler was also a physicist, witha Ph.D. from Yale in 1932. They were married until her death in 1977 and had two children.

In a 1987 appreciation of Professor Wigner, stated: "…this trait of Wigner’s [giving credit to his young collaborators] explains why so much, not only of reactor theory but of theoretical physics from 1930 to 1965 — though it may not bear Wigner’s name — actually has origin in a suggestion made or question asked by Professor Wigner."

In 1960, Wigner gave a thought-provoking insight into the power of mathematics in his best-known essay outside physics, now a classic paper, "". He argued that biology and cognition could be the origin of physical concepts, as we humans perceive them, and that the happy coincidence that mathematics and physics were so well matched, seemed to be "unreasonable" and hard to explain. Even so, he found resistance to this theory, notably by distinguished mathematician . In 1963, Wigner received the . He professed never to have even considered the possibility that this might occur, and added: "I never expected to get my name in the newspapers without doing something wicked." He later won the award, and the . In 1992, at the age of 90, he published a memoir, "The Recollections of Eugene P. Wigner" with . Wigner died three years later in Princeton. One of his significant students was .

Wigner was asked in the late 1970s "Do you remember Rátz?" (one of his early teachers). He answered: "There he is!" and pointed to a picture of Rátz on his office wall.

His third wife was Patricia Hamilton Wigner, widow of another physicist, Donald Ross Hamilton, retired Dean of the Graduate School at Princeton University who passed away in 1971.

Near the end of his life his thought turned more philosophical. In his memoir, Wigner said: "The full meaning of life, the collective meaning of all human desires, is fundamentally a mystery beyond our grasp. As a young man, I chafed at this state of affairs. But by now I have made peace with it. I even feel a certain honor to be associated with such a mystery." He became interested in the philosophy of , particularly its ideas of the universe as an all pervading [http://www.vedanta-newyork.org/thoughtson_rk.htm] . In his collection of essays "Symmetries and Reflections - Scientific Essays", he commented "It was not possible to formulate the laws (of quantum theory) in a fully consistent way without reference to consciousness."

Wigner also conceived the "" thought experiment, which is an extension of the thought experiment. The "Wigner's friend" experiment asks the question: at what stage does a "measurement" take place? Wigner designed the experiment to highlight how he believed consciousness is necessary to the quantum mechanical measurement process.

Wigner was a committee chairman at founder 's annual (ICUS) for several years. At the 11th conference in Philadelphia, he was given the Founder's Award "for his outstanding contributions to science." [ [http://www.tparents.org/Library/Unification/Books/Tbns/TBNS-06.htm The Work of the Church: In Service to God and to Humanity - To Bigotry, No Sanction - Mose Durst ] ]